Faith of a Child

Friday night we were treated to a beautiful meal at a fancy place by our friends the Vervloets. It is fun to hear about Haiti from people that have been here almost forever. :)

On Saturday Noah turned seven. Tina and I went for a run, then we spent the day together and had a family party for Noah. On Sunday we went to church and had a big party for John and Noah in the afternoon.

Today we went to the beach. Tomorrow we're going hiking with the Hendricks.  On Wednesday we'll go back to reality part of the day but in the evening the Hendricks are coming for a sleepover and wii dance party extravaganza.

Today at the beach there was a lady in a uber zexy swimsuit. The whole place was watching her enhanced bod prance around. (Which is what she was aiming for I am pretty sure.) I wasn't sure if the boys had noticed. When we were all gathered in the shade chatting I said, "Did you guys see anyone interesting today?"  Isaac didn't miss a beat. He said "Yes!  Why would she wear such a suit?" The conversation that followed was hilarious.

The kids are off the entire week and we want to enjoy as much time with them as we can. Life speeds by; we're intentionally slowing down for a couple days and turning our attention toward the tribe ... it has been fun so far. :) 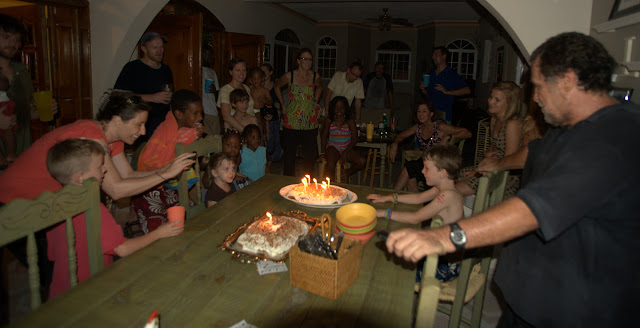 Reposting-  'Faith of a Child' (written/posted April 2008)
by Troy
Whenever things get heated in Port and fear starts creeping in regarding my safety and the safety of our family – I always remember one specific time that God spoke to me and gave me peace that surpassed any understanding.

I was driving into downtown Port-Au-Prince over a year ago – at a time when kidnappings were still rampant and there was a lot of gang activity and unrest. The days’ activities required me to have Noah in-tow, so the two of us were headed into the ‘hot zone’ and I was becoming more and more agitated and nervous. I had spoken to a fellow missionary about the area I needed to go into, and he said “I wouldn’t bring my family near there”. My heart was really pounding and I haven’t felt that fearful in a long time, and I began praying. My prayers seemed to be interrupted each time I started with words from above. I started over a few times only to hear the same thing in my head, and then realized it was God answering my prayer before I even put my request into words – He said “HAVE THE FAITH OF A CHILD”. I looked down at Noah sleeping with his head on my lap while we careened through the streets of Port – unafraid, confident in the love and protection of his father - and felt total peace wash over me.

Since then, I always think back to that time and know that the same assurance of His protection still exists. He is immutable and forever. He has called us here to Haiti and we’re safest in the middle of His Will no matter what that means – even if it doesn’t look or feel ‘safe’ in the human sense – even if trouble does befall us – we’re going to remain faithful and trust Him and keep our eyes on the prize – a prize that puts any earthly pleasures or safety or security to shame.

Noah, on the other hand, can be all four seasons in one day. His childlike faith is also accompanied by proof of man’s inherited sinful nature, and it’s amazing to watch the gears turn in his head as he contemplates each next naughty move. He requires supervision at every waking moment, to keep him from giving in to the temptation of destroying something else. He pretty much always has terrible ideas. Recently, I decided that the supervision should also include his nap-time – just in case. Ok, I was really tired so used that as an excuse.

As I laid there looking at him and enjoying his rare peaceful and sweet side – I was overcome with emotion as I thought about how much we’re alike. I really want to please my Heavenly Father, but usually end up spending most of my time doing what I want and what pleases me…and deep down, Noah really wants to please me but doesn’t usually hit the mark either. I hugged him close and said “It’s really hard being a little boy, isn’t it?” He nodded and I started to cry... and I felt God nodding his head and hugging me close, too.