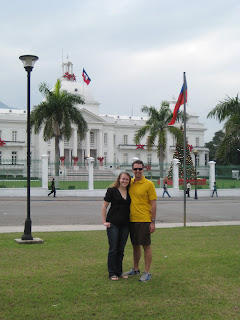 Below are random (but true) examples:

A.) Team comes to visit.  They go on a walk through the small village they are visiting.  One boy speaks English in the village of hundreds. Everyone migrates to him because he can be communicated with easily. He asks for a bike. One man in the group tells the boy offhandedly that "maybe" he can have a bike. Maybe doesn't have the same meaning in the country the STM is visiting as it does in his home country. STM gets to be the hero and make promises.  For two years the boy asks the LTM why the bike has not arrived.  He does not forget that the white guy said maybe he could have it. The LTM has to field the requests for delivery on the STM promise. (bike can also be replaced with watch, TV, Ipod, trip to beach)

B.)  A bike arrives for one kid in a village of 700 kids.  A well meaning STM sent it because they really love their child they sponsor in the feeding/school program and they want him to have a bike.  The LTM begs the ministry partners in America not to force them to give that bike. The LTM fears the trouble it will cause.  The ministry wants to make the donor of the bike happy.  They say the LTM must give the bike and take photos.  The boy gets the bike.  The donor gets the photos.  The donor is happy.  The boy gets beat up and his bike gets stolen by bigger older boys that are angry that the mission did not give them bikes.  Insisting on giving a gift turned out to be a selfish request.

C.)  A STM group comes in wanting to help build houses.  The LTM suggests they work with Haitians and get their input. The LTM makes many suggestions based on the years in country and the things they have learned about the culture and its building practices. The STM wants to build the house according to their practices and styles of building.  They force their way of building onto the group of Haitians they are building the house for and refuse to believe that the Haitians way of doing it has any merit. They finish the house and take many photos of their good work to go home and show their church proudly.  The following Sunday the group is sharing their photos at church and the Haitians are tearing off the roof of the house and re-doing the way that they prefer.

D.) A STM group focused on medical care come to offer a one-day free clinic. Word gets out that the team will give out peanut butter if you say that you have a child at home that is anemic. Suddenly every child in the village is anemic.

E.) STM group comes in to host a VBS not having any cultural context or awareness.  Gifts are given all week. The kids continue to come to see what gift they will get. Songs are sung and taught in English.  The kids speak Creole. A large number of children are "saved" the group does not know that four other STM groups have come through that year and the kids now know that praying for Jesus to come into your heart equals a congratulatory gift. The group sends out news letters boasting (false) numbers of kids that made a choice for Jesus.

F.)  A STM comes to distribute food. They don't have relationships in the area they are distributing. They don't know what is needed. They don't know who else has worked in that area prior to them. They hand out food for two hours only to realize that there are 300 people that did not get food waiting outside.  Fighting starts between those that got food and those that didn't.  The group is forced to tuck tail and run before they get stuck in the middle of a fight. (Food can be replaced with many other hand-outs.)

These are just a few examples among dozens and dozens. Haiti is close and easy to visit from the USA. More STM trips happen here than any other country in the world. Since the earthquake teams have increased. Every week - all year long - team after team visits Haiti.  Some come to "save" and tell and some come informed and ready to learn and observe. Some come thinking that relationship doesn't matter and they walk around handing out $5 bills and gospel tracts and some come to sit and listen and learn. Some come trying to be aware of what others before and after them will do and others come thinking that what they do matters more to Haiti than any single thing that ever happened here.

A while back we went to a conference where one of the speakers was the author of "When Helping Hurts - How to Alleviate Poverty Without Hurting the Poor and Yourself".   If you are coming to Haiti or Africa or Asia or Guatemala or Timbuktu we think it is wise to read it.

I don't believe the man who offered the bike ever meant to cause so much trouble for the LTM or the kid.  I don't believe the VBS group meant to pay kids with gifts to become Christians. I am fairly certain that many groups have not considered that they are one of thousands of STM groups that will come to Haiti this year. I don't think groups come here wanting to foster dependency and send a message that Haitians cannot do things for themselves.  Sadly, for many many years we've been doing just this.  Not because we wanted to - but just because we came in with the wrong attitude.

Many people, ourselves included, come with good intentions.  It is important for us to recognize where we have failed and attempt to learn from our mistakes. We need to realize that good intentions are often times not enough and in the end we might do more harm than good.  All of our pride needs to be laid down. Short or long term, we need to be completely open to learning from those that have been here even longer.

A few excerpts from When Helping Hurts:


It is crucial that North American STM teams move beyond ethnocentric thinking that either minimizes cultural differences or immediately assumes that middle to upper class North American cultural norms are always superior to those of other cultures.


By definition, short term missions have only a short time in which to "show profit", to achieve pre-defined goals. This can accentuate our American idols of speed, quantification, compartmentalization, money, achievement, and success. Projects become more important than people. The wells dug. Fifty people converted. Got to give the church back home a good report. Got to prove the time and expense was well worth it. To get the job done (on our time scale), imported technology becomes more important than contextualized methods. Individual drive becomes more important than respect for elders, for old courtesies, for taking time.


Ensure that the "doing" portion of the trip avoids paternalism. Remember, do not do for people what they can do for themselves.


Design the trip to be about "being and "learning" as much as about "doing".


Stay away from the "go-help-and-save-them" message and use a "go as a learner" message. We need no more STM brochure covers with sad, dirty faces of children and the words "Will you die to self and go and serve?" Such a message places too much focus on the sacrifice the STM team is making to change people's lives - a level of change that is simply not realistic in two weeks - and on how helpless the poor people are without the team's help.


Be careful how STM are presented as part of the larger missions movement. Statements such as "If you are serious about missions, then you need to take a short term trip" are common. This is a vast overstatement, as many, many folks serve in missions long term without the short term experience. Furthermore, such messages can give a false impression about what it really takes to do serious missions or community development work.

Make pre-trip learning a requirement, not a suggestion. Simply wanting to go and coming up with the money is not sufficient to qualify somebody to join the team. If people don't want to spend time to learn before they go on the trip are they really going to have a learner's mind-set during the trip?

A friend sent me a link to this article. It is worth the read.

Please know that Troy and I have jacked this up too. On the trip we made to Haiti shortly before moving in 2005 we did an idiot thing that ticked off the LTM. He had a right to be mad at us. The fact is people do things to make themselves feel good.  It feels good to hand a poor guy asking for help $50 but it is not wise.  In that instance Troy and I should have handed the LTM the $50 and let him decide how to disperse and use it because he knew a lot about the man and the situation.

Edit to add 3/20/11 -
A handful of former and current missionaries wrote to say they agreed this issue is troublesome and needs discussion, yet their board(s) of directors won't allow them to say anything. (For fear of offending or losing support.)

This is a 1.6 billion dollar a year industry.  If we are blessed enough in North America to spend that kind of money traveling to "help" the poor,  I so want to believe that we'd try to learn more and be sure we are actually helping.

These are not easy issues and LTMs struggle to figure out the right way to do things too.  It is a learning process. Nobody comes knowing it all. Most of us struggle even years later but we're wanting to make it better. Please don't write off this discussion with a "it isn't Christ-like to criticize" stamp.  Hiding behind bad practices because we're too afraid to speak honestly has hurt enough people. It isn't Christ-like to trample on the poor because we want to do what we want to do. It is time to look hard at our own "church culture" and how we go about missions.  We don't examine this stuff to be critical, we're simply desiring to esteem the people we love in our respective countries and to stop doing hurtful things.

Respecting the Poor
A Boat that Needs Rocking
ALLEVIATE
at Thursday, March 17, 2011