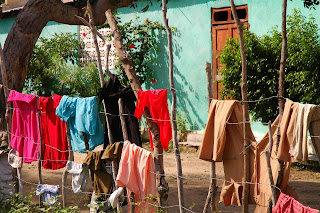 Today I am guest-posting at D.L. Mayfield's site for her series called "War Photographers".

When a young, intelligent, post-modern, edgy writer asks her old, dullish, edgeless, ambivalent Internet friend to write a guest post - well - the aging unhipster shakes off the nervous, pulls out the prescription strength deodorant, and gives it a go.  Seriously though, the Internet can be a lot of things. Good. Bad. Inspiring. Disturbing. Too much of too much of too much. Today, it's an annoying mutual admiration society. Please forgive the irritation and  allow me to say: There are some younger brilliant deep-thinkers writing and challenging us with the things they share and the way they walk out their faith in their daily life. D.L. is one of those. She writes about life in the upside down kingdom. I encourage you to read this and this and scour her site for all sorts of unique expressions of faith, beauty, pain, loss, and triumph.

A young couple moves into a new neighborhood. The next morning while they are eating breakfast, the young woman sees her neighbor hanging the wash outside. “That laundry is not very clean; she doesn’t know how to wash correctly. Perhaps she needs better laundry soap.” Her husband looks on, remaining silent. Every time her neighbor hangs her wash to dry, the young woman makes the same comments. A month later, the woman is surprised to see a nice clean wash on the line and says to her husband: “Look, she’s finally learned how to wash correctly. I wonder who taught her this? ” The husband replies, “I got up early this morning and cleaned our windows.” And so it is with life… What we see when watching others depends on the clarity of the window through which we look.–Author Unknown

The convenient 90-minute plane ride from Miami means an estimated 200,000 people per year come to Haiti. Many seem to think that their group or purpose or trip is a one-of-a-kind and are incredulous when they hear how frequently large groups of matching T-shirts arrive here with similar plans. Additionally, there are thousands of longer-term workers sprinkled all across the island.

It is common for these expats to arrive thinking of people as projects.

As we are all prone to do, people show up here having already decided things about Haiti. They hear the tag lines and have watched or read the mass media news stories and they build their image of the country and her people and what they need before they ever set foot on Haitian soil. Wherever they hail from, they seem to arrive having heard about vodou, poverty, danger, an earthquake, and orphans.

For whatever reason there is a movement among evangelical churches and faith-based organizations that markets mission trips in such a way that it casts the missionary as a hero and those on the other side are in dire need of their help. This means that in addition to what the prospective visitor has heard and decided about Haiti, they are also being told that in one or two weeks they might be able to make a significant impact.

For an extended time, our family has been learning and growing and being uncomfortably twisted and molded by living in this land that so many visit. During these years we’ve learned about our own pride, our own soul poverty, and our preconceived ideas. (Related: We have become cynical and skeptical and things we don’t like too.) We now better recognize the ways in which we have painted this place with a broad brush and forget that individual souls created in the image of God should not be reduced to our small-minded descriptions or looked upon as a project.

As a body of believers called to bring the justice of Jesus and the Kingdom of Heaven to earth it does little good to arrive with anything decided. Each one of us is wonderfully complex and unique and we would do well to remember that is true of everyone, everywhere. Media reports and the State Department don’t have the ability to summarize hearts of people. Churches and mission organizations should not market with the “go save them” narrative.

In our time here, working with and observing different organizations, we’ve had an opportunity to witness many visitors. Perhaps the marketing of short-term trips feeds the problem. When cast as the hero, you are bound to come in with an air of superiority.  That to say, at times we cringe over things said and done.  The cringing comes partially from a place of our own guilt, in knowing we once said and did disrespectful things; in knowing we probably still do sometimes.  Other times we gasp at the disdain some ‘heroes” carry with them.

It is not at all unusual to hear visitors botch something up they are working on and say, “Oh well, it is good enough for Haiti.” I confess that it is those people who I want to follow home with a gallon of ugly colored oil paint and an old tattered brush and walk into their kitchen to show them what my “good enough” looks like at their house.

On occasion our second daughter agrees to translate for teams.  One such medical team was performing minor surgeries.  One of the surgeons brought his fourteen-year-old son on the trip.  The son observed the surgeries and occasionally held a tool or handed his father something.  At one point in the week the father asked his son if he would like to do a spinal-block.  The Doctor stood nearby as his son performed the block.

I am certain the doctor didn’t necessarily mean harm, but when a well-trained, perfectly able physician allows his fourteen year old to stick a needle in someone’s back it says,  “This is good enough for a Haitian”.  As my daughter told me this story I wondered if the physician would appreciate a rookie shoving a needle in his child’s back.

The truth of the matter is this, somewhere along the line we all became convinced that we are a big deal arriving to a place or a people that need us.  Therefore, anything we do is better than nothing, right? (That doesn’t sound like Jesus to me.) This superiority leads us to think, and even say, “Well, it is good enough for them.”  Casting ourselves as the fixers and heroes and “them” as the project is troubling on many levels.

If we want to let the river of His justice flow through us, we have to arrive aware of how prone to superiority we are, how prejudiced we are. We must examine our motivation and presuppositions in the light.  What window am I looking through when I look at others?  What window am I seeing myself through? I know my tendency is to think I am needed. It is a difficult but necessary exercise to continually spend time asking Jesus to mercifully guide us as we attempt to walk with people in wisdom and humility.

God is not made manifest in our ability to “fix” or “heal” or “solve” anything.  He has not cast us as the heroes. He is made manifest in our humility and in our own need to receive healing.  When I can see my own weakness and pride and my need for grace and healing I am left in a position of having nothing to offer …

And you know what?

When I have nothing to offer, Jesus shows up.

From the same series, a beautiful excerpt by Becca at exilefertility.com - To read the entire post go here.

We worked in a government maternity hospital that served the poorest women in our South Indian state. There was an unimaginable collision of beauty and hellishness every single day – on one metal table a woman welcomes her baby boy, healthy and screaming, into her arms; next to her a baby girl is stillborn, her mother weeps, her own body with a serious infection. She had laboured in the village for three days before coming to the hospital. She hadn’t known to get help sooner. Extraordinary life burst forth in the seventy or so births that happened every day. And there was darkness, women suffering without partners or mothers supporting, most labours sped up (and painfully intensified) with oxytocin just to handle the volume of women coming to give birth. Fear and threats were commonplace – exhausted and overwhelmed young doctors working 24+ hour shifts and the lines of women just kept coming. We would show up every day to serve, to love, to rub backs and hold hands, monitor vitals and pray with everything we had in us for God’s kingdom to arrive like these babies, into our hands waiting. I wanted to judge the doctors for shouting at women, the hospital cleaners for taking bribes from families, the men for marrying women too young, judge the caste system for creating mothers in such poverty, judge the practice of dowry for causing new moms to fear birthing baby girls. I wanted to judge because I was angry, I was tired, and I didn’t understand. I didn’t know what else to do, and it felt like something at least, my best defense against the threatening hopelessness and apathy of my own heart.

We pray “your kingdom come, your will be done” because it’s not happening yet. When you’ve caught God’s vision for shalom on earth, you can’t help but see the need for change, for justice. We are a passionate people. We want to protect, to champion, Robin Hood-esque in the lines we draw, how we categorize people into good and bad, oppressed and oppressor, us and them with God always on our side. Simple explanations with issues clearly labeled make our communication easier, readers know where to give the money, at whom to be angry and what prayers to pray. This is the problem, here’s the solution, the victim, the villain, the hero. We write music and emails, we blog and tumble and tweet because if there’s any time in history when we have a sphere of influence, it is now. But we cannot only be storytellers watching from the sidelines or holding signs with clever slogans.

We have to be peacemakers.