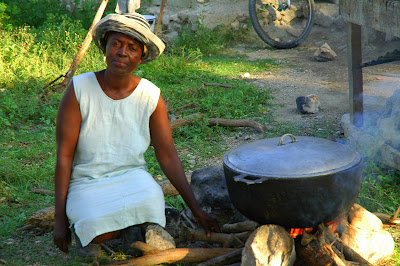 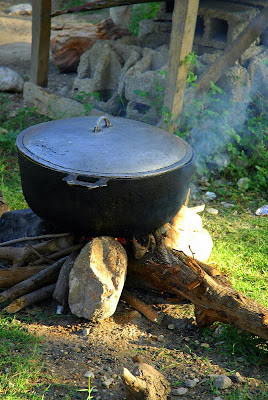 S'mores are our Minnesota campfire specialty. Here in Haiti they kick it up a notch and actually feed many families a full meal from giant pots of rice and beans.

The reason the rice is soooooo good is because of the massive amount of oil and salt (maggi) that goes into it. It is not exactly Uncle Ben's rice and water. I love it but I know it is not healthy and I think people need to stop complimenting her so she will stop making it so often.

If she makes it and you don't eat it - you will offend her. If you walk by it once it is finished and do not take some immediately, she will say "Mr. Troy - I made rice for you - eat!" It matters not if it is 3pm or 8pm ... when the rice is done, you must eat.

Jeronne has the sweetest spirit of any woman I have ever met here. Every single one of us love and appreciate her ... Now if she would just stop making us eat her fattening rice - everything would be perfect.

~~~~~
People are gearing up to party their way through Fat Tuesday tomorrow. Fast Eddy (to meet and read about Eddy go here or here) even showed up trying to trick Troy into handing over some money for things we supposedly NEED to have. He has a knack for figuring out things we need right around holidays. We did not need anything a month ago, but today - IT.IS.IMPERATIVE!!!! He seems to think we're quite dim and unaware of this pattern. Troy informed him we were out of cash today. He left quickly after that. He had to go dig up his Carnival money elsewhere.

We are told today is the day to rest and get ready to party and tomorrow *is the party* and Wednesday is the day to recover from the party. We're thinking a single glass of wine and some dancing with the kids in the kitchen will be enough Mardi Gras for us.

It was an odd morning around here. In the period of an hour another family with lots of kids came over for a few mintues, Zach showed up with a very sick and maybe mentally ill lady and her family, Eddy showed up with his stories, a couple important phone calls came in and Jeronne was out for a while. There were 12 kids here, 11 of them 7 and younger - meanwhile the adults were trying to figure out what was going on with the lady who wouldn't speak and her eyes were darting all over the place. Then about ten minutes later I was working on laundry and picked up a bag with a mouse in it and screamed bloody murder and sent everyone scrambling. Troy stepped on the mouse and killed it. The people all left. Jeronne came home. Things returned to the less chaotic normal.

Our kids are off school all week and many businesses close down so it will be a mellow few days for us with lots of kid time. Troy went to golf with a friend today. I like that for him - he used to love to do that in MN ... so hopefully he is hitting them straight and having some fun. :)