Dozens of unrelated topics and photos 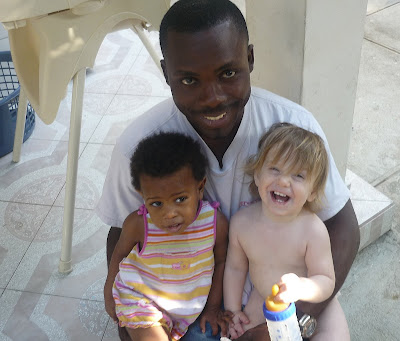 Tipap has been off of school for the week. Like it or not he ends up being back-up baby helper and is quite popular with the ladies. He is willing to push them on a little baby bike for hours - no one else is ... it should not surprise him that the little girls all seem to gravitate toward him. Lydie calls him "pap" and leaves off the Ti. She looks as ornery as she is in this photo. While I am conscious that I do not want to wish this baby-hood time away ... I am still anxious for the day she can be reasoned with. (Never end a sentence with a preposition.) I am hoping her age of reasoning comes sooner than Noah's did. Because his has not yet come. Last night he was arguing with Troy. I asked him why he was whining and arguing and if he thought that a boy about to turn five should whine like a two year old. He said, "I don't tuwn five till Maw-ch." I informed him that was just a couple of days away and said, "Why do you whine like a two year old?" Noah replied, "Because Hope and Isaac tweat me wike a two yeaw owld - *that* is why." At least he presented a solid case.

Yesterday afternoon the Day family came over to swim, eat, and hang out. Isaac and Noah worked on this display all morning, informing me that it was for their friend Kevin, the 6 year old - and that this would tip Kevin off as to which bedroom belonged to the boys of the house. I just love that they already recognize that duct tape has many uses.
Boy Rock - and so do boys. 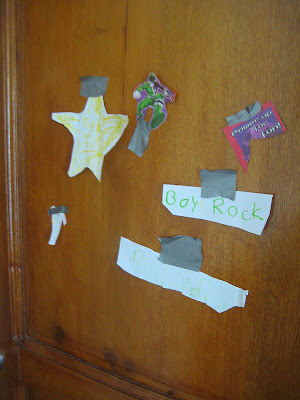 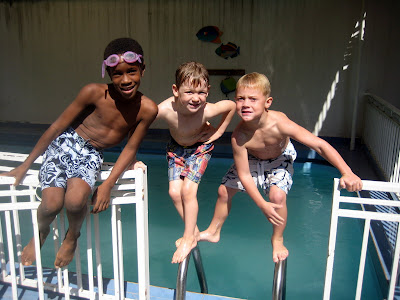 Pictured above, the boys that rock.

So, the pre-Lenten festival of Carnival is over. The whole idea of living large and drinking/eating to excess right before you enter into the season of Lent - (yes Wikipedia is TOTALLY the best source of information on the history of ancient religious tradition - everyone knows that!) is beyond odd to me ... but I digress. 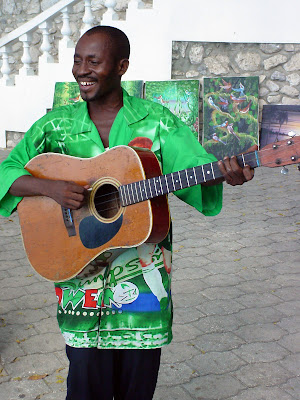 On my run early Wednesday morning I saw one man lying face down asleep on the side of the road, he apparently went all out for his Fat Tuesday. So much so that it carried well into Wednesday. It did not look like fun to me...But let me get to the point...

Last night I was thinking about my use of "free time". In the hours in which children are basically occupied and I am home I am often checking the computer. Walk by, check. Change a diaper, check. Start laundry, check. Then, after I put the kids to bed, I sit for a long time staring at a bright screen of Facebook "status updates."

I have stopped reading a lot of blogs and have reduced how often I write on our blog, finding it much healthier to write only when I feel like it and not because of some real or imagined expectation. It has been a positive adjustment ... but then I caved to Facebook and of course I loved it instantly!

The time I gained when I re-ordered things was redirected to the massive time-sucker called FaceBook. I justify it with my "but we don't have TV" argument. But in my heart I know that a couple hours a night/day are spent looking at Facebook and "connecting" with people. While the connections themselves are very good, the time it consumes is not so good. To quote Ann Jackson - "Online connections are good. They can be deep and good for our souls. But when we turn them into an online community, they can, and do, impact our face-to-face interactions. When we spend more time staring at a glowing monitor than we do into the eyes of those we love, or need to love, it might be time to shut off the computer."

Go here for a thought provoking article she wrote in Christianity Today.

So, for the 40 days of Lent I decided to cut at least one thing out of my life that causes me to avoid my Bible, the dishes and sometimes even the people in my own house. During these 40 days I hope I find a way to better balance and moderate my "social networking" time.

Unfortunately for my addictive personality type, St. Augustine nailed the truth when he said "Complete abstinence is easier than perfect moderation". For me, this is true of everything from diet coke to facebook - but I am not insane enough to give up diet coke. At least not now.

I am reading stories about the 30,000+ Haitians set to be deported from the U.S. (sigh) A few years ago I would have waved my hand in the air and dismissed them all without a thought. I had never attempted to empathize. Today, it disturbs me.

In January we flew back from the wedding with a deportee. We watched as the guard escorted him onto the plane then stood at the door until the door was closed and locked . The young man looked like he might toss his cookies he was so scared. Of course I have no idea what he did to get booted out of the USA, but knowing that thousands of people who don't want to come back here might be forced to - well, it makes me sad. That poor kid on our flight did not even know Creole or have a clue how to survive here. It would be no different than me dropping Isaac in New York City and telling him to figure it out. "Bye Isaac. Good luck!"

I know there are strong opinions about it and I am hoping not to stir up some storm here - but once you stop seeing people as the label you've handed out ( - dumb immigrant - stupid Haitian/Mexican/Hmong - welfare recipient-) and start seeing them as people ... with fears and failures, hopes and dreams, families and friends and a story to tell ... it is pretty hard to just wish deportation on the whole lot of them. I don't know the answer, but mass deportation to a country with so little resources seems like an unjust one to me. 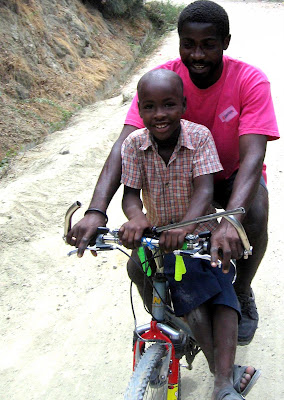 There are a few things we've been scouting locations for and doing fact finding. Last Saturday was especially entertaining. We went to check out a "guest house/vacation property" not too far from our house. The place was called "Dr. B's Paradise Club" - the internet advertisement promised much, using words like- "tranquil" "paradise" and promising views of "city lights" and "mountains" - THE WAY VACATIONING SHOULD BE !!

I don't know which city lights they are talking about. That is funny stuff. Never in my most crazed state would I describe any portion of Port au Prince as "tranquil".

We pulled in and my brains started rattling around in my head. They had giant DJ/Club sized speakers blaring music out onto the cement driveway patio. ("Tranquil"??) There were tables set up with cheesy tinsel trees as centerpieces. The music level stayed blaring the entire time we looked around the "paradise". The house had central air conditioning units sitting out in the middle of family room space, right next to large flat screen TV's. None of the duct work was hidden. It was truly an odd combination of well done construction and very poorly done planning. At the end of the tour the girl showing us around made a call to Miami , presumably to Dr. B himself. The rent was discussed by phone with Troy while we drank ant-covered Tampicos we were offered and waited a polite amount of time so we could get up and go. It was one of those TIH moments when you shrug and wonder who the crazy person is and why normal to me is so very different than it is to Dr. B's friends.

Tomorrow morning we're taking off to Jacmel for one night. There are a few meetings taking place and we're excited to possibly meet a few missionaries face to face that we know only through internet communication. Two Livesay kids got voted on the Jacmel team, leaving Jeronne and Tipap with a little bit lighter load. Troy will bring his camera and we'll share more about the adventure soon.
at Thursday, February 26, 2009