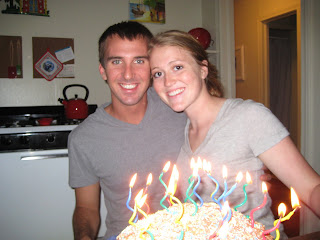 I (tara) am in Waco, TX with my favorite Bears: 1. Britt and 2. Chris and 3. Zoe for the weekend. I came to see their place, celebrate both of their March birthdays, run a half-marathon with them and soak up their cuteness. I am doing all of that. We're bummed that the race forecast is looking cold and windy. The course is very hilly so it could get ugly for some of us who are getting on in years. :(

I head home to the tribe on Monday. Troy seems to have things under control there. He is either Super Man or an awesome faker. He sounded cheery and sent mushy emails without any complaints or reports of problems.

I am a very bad leaver so there were tears when they dropped me at the airport but Noah broke into a prayer for me on the spot. He recently told Troy that "Mom is the cryingest Mom in the Wold" (no R in world). I just hate goodbyes. That's all. No matter who it is, I hate it. (I guess I don't often say goodbye to people I dislike.)

I attended class with Britt yesterday. In the Lifespan Development Psychology class we learned nothing. I could teach that class. ;) In the Microbiology class I learned a lot. We were learning about HIV. I attempted to blend in, but I think I was conspicuously old.