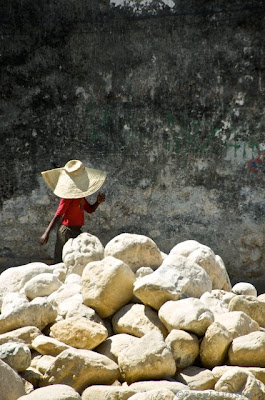 Alain Le Roy told reporters that when he visited Haiti a month ago, non-governmental organizations and "100 percent of the politicians I met" praised the 8,000-strong U.N. peacekeeping mission in Haiti known as MINUSTAH for improving security, especially in the capital. He said he went to once off limits Cite Soleil where people told him they were able to walk in the streets day and night.

"Clearly it's a fragile situation in Haiti," he said. "There are still lots of difficulties ... (but) we think Haiti is winnable, and we consider that it's important to raise awareness."

He said the secretary-general "wants to raise awareness on Haiti _ to see that there must be more assistance to Haiti."

"He intends to go to Haiti with Bill Clinton on March 9-10 ... mostly to raise awareness of Haiti and to show that the U.N. and other partners are very concerned by the Haiti situation, and we consider it's time to use the security brought by MINUSTAH to raise assistance to Haiti," Le Roy said.

He said there will be a donors conference for Haiti most likely on April 13-14 in Washington chaired by the Inter American Development Bank.

Haiti was devastated by four hurricanes last year and is preparing for Senate elections on April 19.