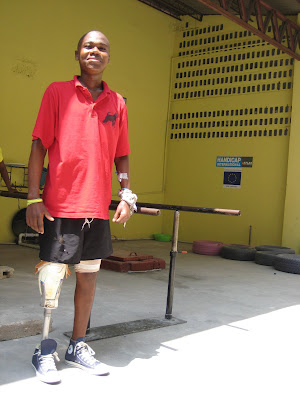 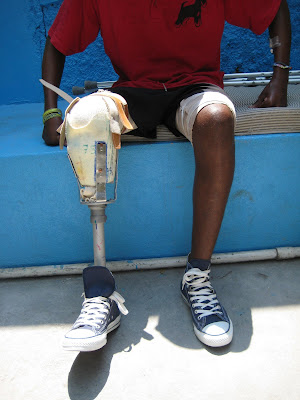 Photos of what used to be the home Emmanuel lived in: 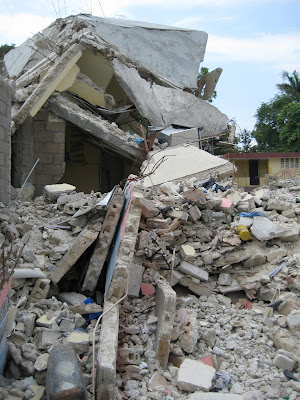 He was trapped in this rubble for three days. 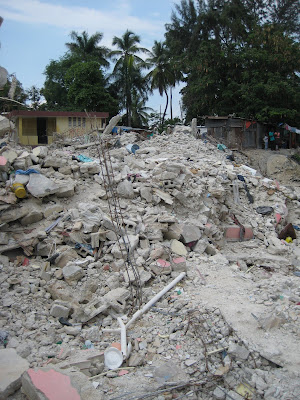 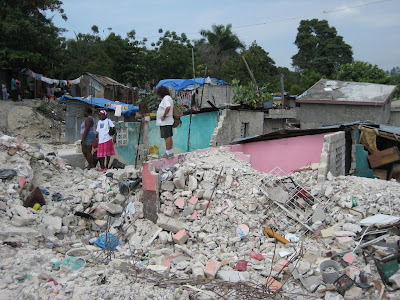 Emmanuel is still residing at the "Heartline Hospital". He's currently our most serious patient in the sense that his left leg wound is still fairly open and needs to heal. His dressing change is done every other day and typically takes a long time. He has severe pain with the dressing change. Sometimes he is being sedated with Ketamine. Other times we need to give him Valium and Percocet pre-dressing change. That worked so-so for a little while, but then his anxiety and pain really escalated, to the point where it was almost impossible to change it.

A Physicians Assistant from Quisqueya has been coming every day for the past week. She knew of an anesthesiologist at Quisqueya. He came and put Emmanuel to sleep so they could really clean off his wounds and re-dress it. It isn't getting any worse---but it's not getting much better either.

We're going to give it until mid week, and if it's still really open, we are going to take him to a plastic surgeon to see if he needs surgery again. That would be a huge bummer for him. He's really up and down in his emotions...which is totally expected given everything he's been through. He's one of the most sensitive people (in terms of his pain tolerance) that we've had to change dressings on---which I know is because he's been through an unbelievable amount of pain in the past 3+ months. He can barely tolerate even the most minimal pain now. It's hard to see. But he is slowly, slowly getting better, I think.

Whenever he gets out to Handicap International to walk on his leg, it totally brightens his day. He had a week (end of April/beginning of May) when he had a pressure sore on his stump, and he couldn't go to H.I. during that week. I think that week of laying around really took a toll on him too (that was also when he started not being able to tolerate any pain during his dressing change at all----I know it's all related). He was able to go back to Handicap Int'l a couple days ago and it totally brightened him up.

The school Emmanuel attended completely collapsed. (Troy posted photos of it here.) He had 2 years left of high school -Filo and Retour. He is very down about school--he really wants to finish school. He does not want to go back to Miragoane. He definitely identifies as living in Port au Prince and didn't want to leave the city. He was worried about where he would go to school and how he would provide for himself and his family. He had one cousin who it sounds like really took him under his wing-housed him, paid for his school, took care of him. That cousin died. He now feels like he doesn't have anyone to play that role. His parents are pretty old and it sounds like they really don't have the ability to work.

There are some other relatives in Port, including one uncle. Emmanuel had hoped to live with him. The uncle said that he's got lots of relatives living on his land in Port and doesn't have any more room. After Emmanuel found out that wouldn't work, he was really down.

Emmanuel is going to be living at Heartline for the foreseeable future. Prior to the quake he'd been living in Nazon with his extended family. I think he'd lived with them for a long time. His mom and dad, 3 brothers and 3 sisters live in Miragoane. They all survived the earthquake. He was living with cousins and other family members.

There were about 10 of them living in that house in Nazon. He was trapped along with many family members. I'm not sure how many died in the house but I think it was at least 6. He was trapped with one of his cousins, who was alive for a period of time after the quake but then died before being rescued. Emmanuel was rescued on the third day. He had a bad crush wound to his right leg, as well as a bad wound on his upper right leg. His right leg had to be amputated. They did a skin graft, taking skin from his upper left leg to cover the large wound on his upper right leg.

These are the situations that the Haitian people face post-earthquake. The answers are not easy or simple. The Heartline team covets your prayers for wisdom and discernment. We need your prayer support. Please also consider supporting the on-going work financially. Ask your church if they would like to support this work. Tell your friends. If you have questions or would be interested in speaking with a Heartline representative, please let us know. Thank you for reading, giving, praying, and hoping.