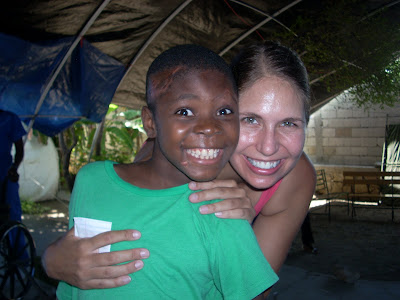 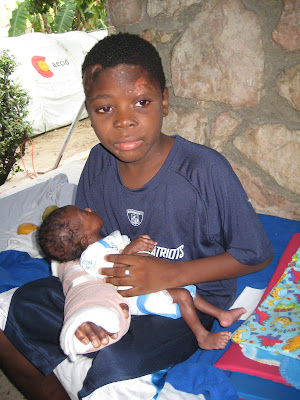 On January 12, 2010 he was finished with school and had gone to his grandparent's house in Nazon, a neighborhood near downtown Port au Prince. Rosemond was alone in the house at 4:53pm. His grandma was out on the street walking toward home. Rosemond's two uncles, who also live in that home and are in their late teens, were still in school. Thankfully, their school did not collapse.

Rosemond did not live with his grandparents, he was simply visiting that day. He lived with his parents, in a house not too far away, near downtown.

When the earth shook Rosemond had no one to tell him to run, no one to cover his head, no one to call to God with him. He was alone and afraid. 45 seconds passed and as he the earth tossed him and the house he found himself trapped under a cement block house that had completely collapsed. Imagine the fear. Imagine the loneliness. This one little boy has overcome so much by even getting through that day. If only that terror had been short-lived.

Rosemond waited for three days to be found. His grandfather heard him calling out for help, dug until he could see Rosemond's face and eventually, a full three days later, was able to free him from the rubble.

Not too far from where Rosemond was buried, his mother and father were buried in their family home that had also collapsed. Rosemond lost his mom and dad on January 12, 2010.

Once found, Rosemond's grandparents tried to find him help. They visited a few different hospitals. His grandpa told Dr. Jen that they eventually ended up at a field hospital. We think this was actually the Israeli Field Hospital.

Friends of Heartline (missionaries Jared and Jalayne C.) found Rosemond there. Jared and Jalayne were told he just needed dressing changes, and were asked to take him. Once they got Rosemond back to their place and watched him for a few days, they became concerned with the severity of his injuries, and brought him to Heartline.

Those of us at Heartline first met Rosemond on January 25th. These two photos are from those first weeks after the earthquake when Jared and Jalayne found him. 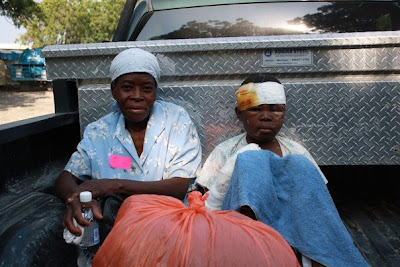 In the back of a truck at the Israeli Field Hospital with his Grandma.
Lying on the left in green, at Jared and Jalayne's place. 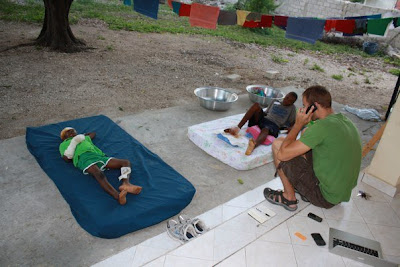 During the three months Rosemond has been at Heartline Hospital, his grandmother has been with him. Dozens and dozens of Heartline volunteer medical people have been in and out in the last 14 weeks. Not one volunteer has left Haiti without some sort of heart connection to Rosemond. He has changed the lives of many American, Canadian, and Haitian medical professionals. His injuries have been healing. He had serious wounds on his head, leg and hand. His hand was the worst and healed with very limited range of motion.

He struggles with ongoing unpredictable grief. Dr. Jen shared that sometimes he just weeps and weeps for his mother and father. He will often be playing happily one moment and withdrawn and quiet the next. He has experienced such unimaginable loss in his short life. 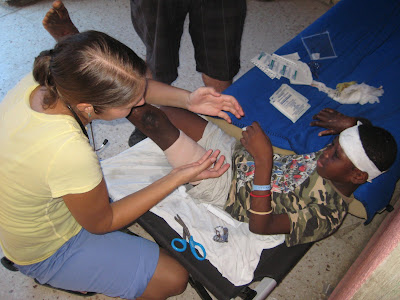 Rosemond had hand surgery on April 21st. He will be in a specialized cast for the next couple of months, then will likely have a second surgery. He will also need aggressive physical therapy down the road to make sure he regains functional use of his hand. Post-surgery he was strong, hopeful, and encouraging. He complained of pain for a couple days but quickly improved.

Rosemond's grandparents house is completely flattened. There is nothing left to salvage. They've put together a small shack on top of the rubble (it is up high...hanging over the rubble). Right now that is where Rosemond's grandfather and two uncles live. The Heartline staff in Haiti were able to provide them a tent, cooking supplies, mosquito net, tarp, etc. The family plans to set up the tent on top of the rubble of the house.

This is a family we are connected to and responsible to aid in the reconstruction of their lives. We hope to help them rebuild. There are some land issues that need to be addressed and figured out. Please be praying with us for answers and clear solutions for helping this wounded family. We are praying about ways we can support Rosemond's grandmother and grandfather as they try to raise this spirited ten year old. We don't yet know what that will look like but we ask you to join us in prayer for the best decisions to be made for their future. 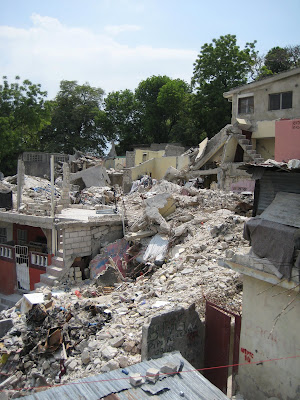 Above, the red metal door was the way that Rosemond's grandparents would enter their home. Below, a temporary shelter perched upon the rubble. 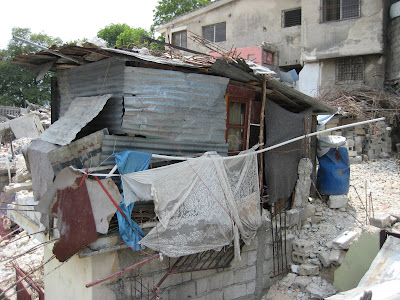 This video was taken by Dr. Jen prior to learning extra details of the story ... more information was gathered after this was filmed, but it gives you a bit better perspective.


Rosemond is obviously just one of thousands of stories of heartache and loss following the tragic events in Haiti on January 12th. This does not make it any less heartbreaking or horrible. He and what family he has remaining are in desperate need of ongoing love and support as they look to rebuild their lives. We at Heartline feel called to assist them and use our resources to ensure they are looked after and provided for until they are able to get back on their feet again.

Rosemond is a survivor. He is amazing. He has encouraged us and lifted our spirits through some of the most searing pain any of us can imagine - and we hope in some small way to return the favor and help restore a future for him and his family.
at Sunday, May 02, 2010