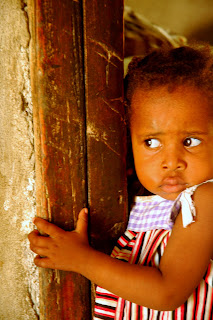 Keeps us from trusting.

Keeps us from risking.

Keeps us from healing.

Fear.  I hate it.  I hate what it does. I hate how tricky and twisted its effects are. I hate how much harm it causes.

Fear is tricky because it looks like other things on the surface. It manifests itself in many ways and is usually well disguised.

Troy and I learned from a really great counselor that most of the anger stuff he struggled with in Haiti was actually fear. He acted angry as a cover for what he really felt sometimes, which was a fear of not being able to protect his family.

About a month ago we were getting in our truck to leave Sunday morning worship a man going by on the street looked me in the eye and as I was loading my kids in the truck he yelled at me, "That's a _____ (insert racial slur) church."  I was fairly stunned and just looked at him as he rode away.  I wondered, why say that? Why did he need to say that to me? I can only guess that his anger makes him feel in control - but underneath that anger is the real problem, he is afraid.

Turn on any major news network and within a few minutes they'll report on something while telling you how fearful you ought to be.

People refuse to admit when they are afraid because admitting fear is giving up control. They would rather stay comfortably duped in their counterfeit world with a false sense of control.

We heard a pastor/professor preach on fear this summer. He pointed out that all throughout history people have struggled with fear.  Adam and Eve, Moses, Joshua, David ...  the list is long. Pastor Casey preached that the key is not to stay in a place of fear but to daily allow God to help us identify and deal with our fears.

The truth is, at some time or another, all of us have been negatively affected by fear.  Some people live their entire lives in bondage to it, allowing it to stunt their growth and make them bitter and angry.

Fear acts as a filter that blocks truth.

God has been dealing with me on this issue lately.  I have had a sense lately that we are experiencing some spiritual growth  (and so much more room for that remains), but this issue crops up for me again and again.

The issue is fear; the type of fear that can end up tripping us up as we try to follow Jesus wherever it is He calls us. Sometimes I bring it on myself and other times I allow the words of others to plant it. An email asking me if I have seen this news story or that prediction, or a disapproving stranger telling me we're crazy can serve as my spring-board into worry. I can literally be 100% fine one day and then get nervous and questioning the next.

Realistically I know that we will face opposition and illness. Those are not irrational thoughts.  The difficult part is finding the balance between being realistic about the challenges while not falling into fearful thinking. As I look at what lies before me as a mom, a sister, a daughter, a friend  ... and I think about moving back to Port au Prince soon with some of the most precious people in my life ...  I get a little bit afraid.

It is not at all that I don't want to go back, truthfully I am so excited to get back. It is just that I psych myself out sometimes.  At times I get caught up in worrying about details and logistics and unknowns; things that worry and fear can not and will not change.  If I ever allow fear to gain any permanence in my heart and mind it would wreak havoc.


Over and over again God has shown up in my life to do battle. Sometimes that means to comfort and to heal and other times that means to protect. I have four+ years of proof of that in Haiti. I don't want to forget what He's done. I want to remember that He has not changed.
God says: "Fear not."

That's what I am trying to do.

10 Fear not, for I am with you;
Be not dismayed, for I am your God.
I will strengthen you,
Yes, I will help you,
I will uphold you with My righteous right hand.’

"Our God is not a God of safety. He does not promise to spare us difficulty. He promises to be present with us working out His holy purposes. He is not going to spare us. He is going to be with us."
-John Casey