These three kids have one other sibling that is still nursing.  The mother and father are very thin as well.  (photo below) As a family they had to save money for two weeks to bring Ronel and Marie-lange.  The RHFH clinic would have seen them for free but they wanted to pay the small fee to get their charts made.  2 charts for $1.60 US and it took them two weeks to save and get that together.  These three kids were simply starving.  There was nothing else wrong with them.  They just needed food.  That was it.

Any variety of food given consistently would have helped them gain weight but over and over we've seen that Medika Mamba adds weight quicker than anything else.  These kids looked and felt tremendously more healthy after just a few short weeks.  The proof is in the before and after photos above. 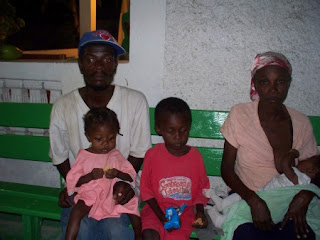 Certainly the hardships faced in Haiti by families like these are heartbreaking and numerous. Those hardships only increased and became more complicated on the day the earth shook, now ten months ago. When the situation gets this dire the best thing to do is respond quickly with something that is known to work miracles rapidly.

For approximately $100 a child can be on Medika Mamba for a treatment plan lasting somewhere between 60 to 90 days depending on the severity of their case.   (As an added benefit this product is produced in Northern Haiti and is creating jobs.)

Please chip-in to fund this program so that Lori, Licia and Zach can continue to be able to use this product to help the children and families they serve recover quickly.

How many more kids can we raise funds to treat in the remaining three days?

Please share on Facebook, Twitter, link to and spread the word in any way you can! Thank you.
*Photos and facts pulled from Licia's archives with permission.
at Thursday, November 11, 2010