on driving and unsurpassable worth

I'm under the impression that most reading here have some sort of interest in Haiti.  It is safe to guess that maybe many of you have been here before.

Since I don't know for certain, I'll write this as if you've never experienced the driving here in Port au Prince first-hand.

Between that sort of non-sensical driving, too many cars on very rough insufficient roads, and many hours spent in those conditions on certain days, it can sometimes cause a person to feel enraged. I'm telling you, it is challenging.

Perhaps this does not resonate with some expats or Haitians, but we have found one of the very hardest places to keep Jesus in our mind and actions and words - is from behind the wheel on the roads of Port au Prince.

Troy starts out as a more cool-headed driver than I do; no news flash there. Driving makes me agitated. I try not to go far very often. My over-developed sense of justice just cannot take it. I am very much a "lets take turns and be fair" kind of person and the lack of polite turn taking pushes every hideous button in my soul.

When I do drive I have to talk to myself about it first. I need to say things like, "It doesn't matter that it is not fair.  It doesn't matter if someone is rude. Your job is to be polite and calm." Some days are really okay and I might not even get annoyed.  On a really good day it is all funny and entertaining. On a bad day it feels like everyone is trying to crash into my precious children and it is harder to keep from muttering curse words at the idiocy of it all while employing the "if I cannot beat em, I'll join em strategy". It's madness I tell you.

Recently Troy and I were together at an intersection that was meeting every single qualification for high level annoyance. It was the type of annoyance that can quickly morph into anger. Troy was driving. I was the passenger. As the less refined driver, I was watching him closely.

I was impressed that the statement itself seemed to calm my annoyance from the passenger seat. I accused him of showing off and being uber-spiritual but he said, no, it is important for him to actually think those words. He needs to literally remind himself of that in order to keep from getting very angry at times.

I think I'll try this the next few times I come up against insanity on the roads to find out if it works. I also think I'll try it when I read the news, or see friends fighting about politics or whatever-thing on Facebook, or when someone lies to me, or steals or cheats.

Yes, even drivers in Haiti. 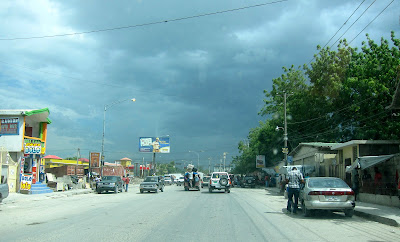