I already lamented the hello - goodbye routine of the NYC/MSP whirlwind trip, enough of that already. On the flip side, quick trips are also nice in some ways because they leave you no time to torture yourself with trying to reconcile and make sense of the world (the two worlds).

I could "go there", but it is so overdone (by me) and I’ll just leave it at this:There are (at least) two totally different realities on this earth and we are privileged to understand and experience a small portion of both them.

We’re home now and reunited with this happy tribe of fools: 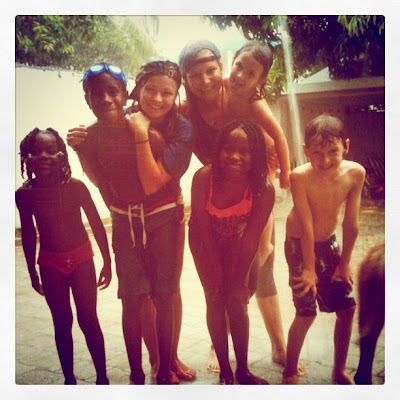 The downpour at dinnertime last night was the highlight of their day. They squealed with delight as it poured down and they danced in the driveway.

For all the negatives we might be able to list about raising kids here, the positives still far outweigh them in our minds.

Kids that (literally) jump up and down over a pound or two of strawberries or clap with joy over a dish of ice cream are kids that appreciate the gifts of life in a unique way. Children that act like playing in the rain in their underwear is tantamount to a trip to an amusement park are generally content and easy to please kids. It’s nice. These kids and their worldview are special, I’m sure there are etiquette rules against me (their mom) saying it but I don't care, I’m saying it anyway. I'm proud of these little freaks.

The trip was so much fun. The free hotel was lovely. We saw two musicals, they were both so good. Troy knew his way around well enough to put me at ease. We packed a lot into a few days. NYC is insane and entertaining.

Riding the subway made me think about Law & Order SVU ... I realized my heart rate was increased for irrational reasons seen only on television. I said something about finding Cite Soleil less intimidating than New York City; Troy mocked me. 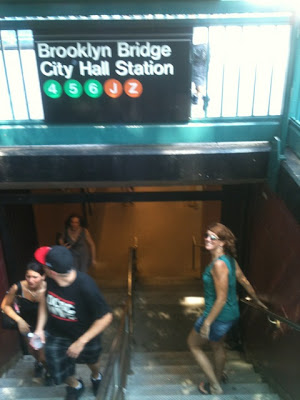 The BlogHer conference was huge in numbers. I heard people saying the attendance was close to 5,000 women. I was honestly pretty disappointed with how few people came to hear the group of ladies that were brought in from around the world. The other ladies were all such neat women, I enjoyed meeting them and hearing a tiny piece of their stories.

I have talked all of that disappointment out with a few friends and Troy, there is probably no need to do it again here. Need to let it go.

One friend took time to write me these sweet words:


What I meant to convey (and bumbled horribly) is that sometimes we embark on journeys expecting one thing, only to find something completely different than we expected. Maybe what you wanted most was to share your heart and bring change for Heartline. But maybe what your heart needed most was Memphis (musical) and the Brooklyn Bridge and uninterrupted conversation and Troy time. I just think it's important for you to remember that God provides, even if it's in the weird form of BlogHer scholarships.


Regardless of whatever unrealistic expectation I had about attendance at our session, I am very thankful for the gift of the trip (thank you BlogHer) and for the chance to see another part of the world with my best friend.

We try to get time alone occasionally but this obviously gave us a perfect excuse to TRULY get away from the daily stress and the usual stuff and reconnect. I love Mr Choy, I love his heart, I loved how he just rolled with the all-women conference and made me laugh when he knew who the Pioneer Woman was long before I did. He's funny. He made the entire trip so great with his planning and organizing.

On the last night in NYC we wanted to see Rockefeller Center. The streets were as crowded as we'd seen them. We decided to take a bike-taxi. Our driver was from Moscow. When he asked us where we lived, Troy told him.  His response, "Oh that place is better than America?"

After a hilarious ride (the driver laughed maniacally throughout the whole thing) through insane traffic and many near death experiences (a cab actually hit the bike pulling us) we got out of the bike cart to learn that our driver believed that 7 blocks was worth $60. Troy disagreed and offered him less and the argument began.  We gave him money and started to walk while the driver told Troy not to "make him go crazy". There is no amount of crazy in the world that would impress Troy, but I am glad the guy didn't give it much of a try. I nervously asked Troy "Are we in trouble?" Troy made some remark about this not being his first rodeo and we left the guy standing there yelling at us. It made the subway seem really boring.

The world is large, but I learned that a lot of people find ways to make their personal world small.  For example, when I did not use my whole gift card the lady at the Loft store was truly shocked when I answered her question, saying that Port au Prince has no Loft store.  (a violation of human rights for sure) It is weird to me when people don't know where Haiti is. I guess the news coverage after the earthquake didn't show maps, or nobody cares, or we have no memory space in our brains because there is too much new info coming at us all the time, or something.


Paige and her best friend of many years spent the last several days together holding down the fort at home.

When I asked Paige what the hardest part was she said, "I was shocked at how much direction and instruction I was constantly giving, it was like non stop talking. I had to talk a lot. I mean A LOT."  She finally gets why Troy and I occasionally leave the premises in order to communicate.

Today Paige and Julia are being rewarded with an entire day away from home and away from giving instruction or listening to needs. We will all be sad to say goodbye to Julia. These two have proven it is possible to remain close friends even over a long distance.

At the Minneapolis airport early in the morning yesterday, I was standing in the bathroom when a little girl about five years old entered. Not more than five seconds after she came in her mother arrived. The Mom was angry and was delivering a "you will get kidnapped" speech because the girl had gone too many steps ahead.  Maybe only Minnesotans will get this, but my favorite moment was about three minutes in to this over the top  and long lecture when the Mom said to the little girl, "Just so you know, this is not Mankato anymore, you can't just walk off like that and expect to be safe!"

Setting aside the larger issue of teaching your kid to be fearful with the words you choose, I was rather entertained that Minneapolis and the airport qualified as big, scary, highly dangerous places that offer zero safety. When we landed in Port au Prince later in the day, I turned to Troy and said, "Just so you know, this is not Mankato anymore."
at Wednesday, August 08, 2012