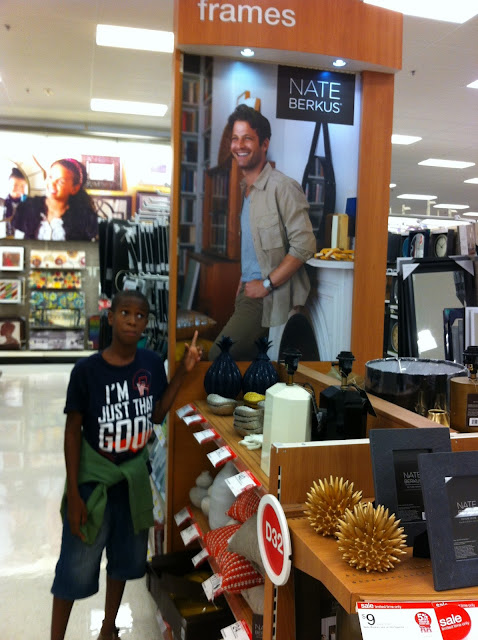 A few weeks ago I set foot on U.S. soil with my Haitian-American son, Isaac. You might recall we had a little bat drama and we were there for rabies vaccines on an entirely unplanned and last minute trip.

Our trip was less than 72 hours long; it was entertaining to listen to Isaac process things he was seeing.  He has spent 8 of his 11.5 years of life in Haiti.

He was last in the USA in December of 2010. Isaac straddles the USA and Haiti in such fascinating ways and the insight he offers into culture is quite astute.

He told the ER nurse when she asked what it was like living in Haiti "Well, it can be challenging at times.  Like yesterday for instance, when a bat bit my ear. That was pretty challenging".  She didn't quite know how to take him.

The roads and the speed are of course mind blowing; we rarely exceed 30 miles per hour in Haiti. He last drove at 60mph in December 2010 so he has forgotten what that felt like. In the car he was silent, just taking it all in. "Florida really is a very nice place, huh Mom?" and "It seems like here compared to Haiti that maybe they are a little bit more safe and organized."

At Target he said many times, "Mom, Who is Nate Berkus?"  I kept shrugging. I don't know who Nate Berkus is. On the fourth ask, I said, "Buddy, I have no idea. Where did you hear his name?"  He grabs my hand and brings me to the sign with Nate Berkus smiling down on us.  "Oh, him. I guess he is a designer and his name is on household stuff like towels and things, if he designed it."  Isaac gave me a blank stare and said, "But isn't a towel just a towel?"

Later he said, "So, Nate Berkus is like a model guy. That is kind of like Calvin Kane right?" I nodded and said, "Klein, and kind of". He said, "Huh. There sure are a lot of man models here in America."

Inside of another store he said, "So. This store is just a store for clothes. Weird."  Later, as we browsed, I found a pink shirt I liked for him.  The sales lady was chatting him up and said, "You'll look so handsome in pink."  He smiled, "That's probably true", he said. After we purchased it she said, "Thanks for shopping." Isaac said, in all seriousness, "Thanks for having the store here for us to shop."

He got lost at Target and asked a woman, "Have you seen my Mom?"  She said, "What does your mom look like?"  He said, "She is tall with red hair."  No mention of the most obvious needed descriptor. When I said, "I think you should mention that I'm white next time you describe me to a stranger", he said "Ooooohhhh, yeah, that is so true!"

The friends that were hosting us had a tennis match on the television.  Isaac said, "So. There are places like that where they only just have the space to play that sport?"  Using huge wide  open space for two people to play tennis is just kind of mind-numbing for the guy. He can hardly believe that.

Isaac saw an advertisement for some sort of strip club on top of a taxi cab. The woman was scantily clad and posing seductively. He looked at it. Stood quiet for a moment, then looked down at the ground and said, "Mom, look how that girl is posing. Isn't that so sad? I don't want to look at it."  (without television we have very little exposure to anything like that here)

At the Miami airport as we waited early in the morning to head home, I came back from finding coffee, his face was filled with worry. "What is wrong buddy? Was I gone too long?" He said, "Mom, this TV is only about murder and scary and sad stuff. Can we ask them to change the channel?"

In our 72 hour trip Isaac got just a little taste of American culture. I am so anxious to eavesdrop on all five of the younger kids' observations when we take the entire family to the states later this year.