the little known dangers of Spelunking

Isaac and his siblings headed south last Friday with their gifted and always adventurous teachers. They drove about 6 hours (which does not mean 300 miles by any stretch of the imagination) to their destination. They had some ideas in mind for what they would see and experience.  On Saturday after breakfast they headed to check out some caves in the area.

As Isaac tells the story, (typing it in word for word) it went like this:

"We were going on Paige's graduation trip. We were coming out of the first of three caves. This person started screaming suddenly. This kid was pushing him toward whatever was scaring him. Everyone got scared and everyone started pushing back and forward and not knowing what to do because some bats started flying around.  The screaming made it so we didn't know what was going on. Paige grabbed me vehemently (that means strong, violently, and intensely but I am using that in a good way, not like she did that to hurt me).  So I was the first one in line which meant that I was the last to be able to get away from the irate (this means angry) bats. I felt a pain in my ear. For about two seconds it was locked onto my ear. It was stinging a lot. A little more worse than a Bee sting.  Paige said, "Isaac, your ear is bleeding." I touched my ear. Sure enough. It was. That is the end of my appalling story.  I hope you can use appalling that way in that sentence."

Meanwhile back in Port au Prince, Troy and I were home listening to Lydia's gas and wiggling Phoebe's front teeth and watching Call the Midwife together. Our Saturday was turning into the exact lard-fest we were hoping for.  Around 1pm, Paige texted about the bat bite.  I was initially totally chill.

I called Kelley Crowdis, a spunky and brilliant Veterinarian in Haiti.  She said that for sure he needed to be vaccinated.  She said the bite being on his head made it a bit riskier and time mattered more. We started looking for the vaccine and wrote to Dokte Jen to see what her input might be.

By 4pm we had enough Google, Veterinarian, and ER Pediatrician advice to know we wanted him to get the best (unexpired) vaccine and the Immunoglobulin too.  We found a price list from the drug rep we use for the Mat Center - and the Immunoglobulin was on his list for $2,500 USD.  Getting him to take our call and deliver it on a Saturday or Sunday was in question. The refrigeration of his vaccines was in question. The fact that it was on his price list didn't mean he actually had it.  If you've eaten at a restaurant in Haiti you understand this.  Lists of items available are meant to share what might happen - if perhaps you were somewhere else.

Beth tried to contact the U.S. Embassy (didn't find the right person, weekends are not the best time for needing the Embassy) but the rumor was that they had vaccine but not Immunoglobulin. There were just too many questions and we did not want to choose to sit in Haiti and gamble with the unknowns and the unconfirmed while allowing our flight possiblities to close. It seemed like a pretty simple decision.  We booked flights to Florida and left Sunday morning at 9am.

We arrived in Fort Lauderdale before noon and our oldest daughter's mother-in-law, Jill, picked us up.  She drove us straight to Joe DiMaggio Children's hospital where they knew we were coming thanks to Dr. Jen and her simply amazing and kind friend, Dr. Hopkins. 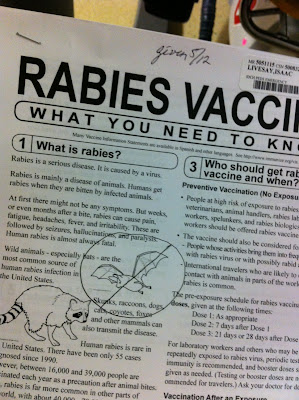 Within 90 minutes of landing in the USA the vaccine he needed was in his body.  I didn't even know how stressed I was until he had the vaccine swimming in his veins. Four elephants climbed up and off my chest and we called our ride to pick us up.

The ER nurses were fascinated by this bat story. When one of them asked Isaac, "What is it like living in Haiti?"  He said,  "Well, it can be challenging at times. Like yesterday for instance, when a bat bit my ear. That was pretty challenging". She didn't quite know how to take him. He is such a unique and wonderful combo of dorky and awesome, oblivious and brilliant.

This is the back yard of the home of the wonderful friends that are hosting our little Rabies adventure.

Part II of our crazy adventure later (along with SO MANY wonderful America Isaacumen observations) ... For now we are off to the hospital to pick up the next three doses of the vaccine to take home with us in the morning.