May 1 lessons in cultural sensitivity

You may or may not know that May first is a holiday in Haiti.  It is Labor Day. Most businesses and offices are closed today.  May first is also the day that our next door neighbors throw a big party every year.

We moved to our house in the middle of 2008.
On May 1, 2009 we were not invited to the annual party. On that first of our May firsts as their neighbors, they loathed us, and the common air we breathed. I was once offended by that, but in hindsight we were (and ARE) quite unlikeable from a neighbor standpoint.
Who wants neighbors with tons of rowdy kids, a noisy gate, and a loud generator?
The answer is: Nobody
The better question is - What did we do to deserve to be liked by them now?
The answer is:  I have no earthly idea. I don't even like us.

In 2010, there was a natural disaster that took away a lot more than that year's party.

In 2011 life had returned to "normal". We had bonded a bit, we were invited and we were in attendance. Every last one of us went. We remembered the music most:

"The party was in the backyard underneath swooping pigeons and florescent lights.  When we walked in we were seated at a table similar to if we were at a restaurant. We tried to get up and mingle but they told us to sit. The music was loud and included Celine Dion, The Eagles, Aaron Neville, Chris DeBurgh, Elton John, and lots of Haitian Kompa. The Haitian Kompa made perfect sense.  Chris deBurgh, and Lady in Red, not so much. As former peeps in "the biz" (to all the DJs in the crowd - holla!) Troy and I took copious notes about the play-list - should we ourselves ever attempt to host a culturally appropriate Par-Tay in our neighborhood we are ready to spin records with confidence."

Last year, on May 1, 2012 I was in a mood. I refused to walk the 14 steps next door and begged Troy to allow me a stay home and sulk pass. Troy went alone and sat at a table with some neighborhood kids while they marveled aloud for an extended period of time over the fact that Troy was having a beer. Their paradigm did not allow for a Jesus lover to have a beer.  Troy blew their minds by eventually having two. They are still in counseling to this day.

The neighbors were not pleased that I did not attend last year. We have been verbally reprimanded a number of times in the last twelve months. We have been told that this year attendance is mandatory ... that makes it sound so FUN!

Here we are.  May one. I dread going almost as much as I dread the fallout if I don't go.  There is currently a first time mom in labor, but that excuse is not sufficient.  Geronne just told me that the neighbors don't buy the birth of a child as an acceptable reason to miss the deep fried everything or the vocal stylings of Chris de Burgh. Priorities people!

I am not sure what I'll do when 8pm rolls around.  If the birth of a child is insufficient, I am fresh out of excuses that top that. 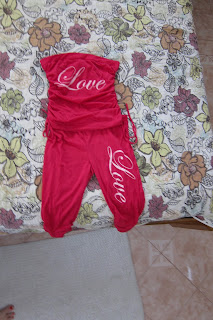 Yesterday, a sweet new mom that delivered her little one last month, gave me a gift.  I treasure this young woman and her generosity is truly touching.  Even more touching than that though, her kind estimation of my butt size. She handed me a plastic bag and said, "a little gift, for you".

She wasn't kidding.  It was little.

Inside the bag was an itsy bitsy tiny outfit for a person of half my size. I thanked her and told her I feared I was too large to wear her gift.  "It stretch", she said with a smile.

We tested the "it stretch" theory when I got home yesterday, just for laughs. Suffice it to say, it not stretch enough.

Now you see, I'm stuck. I don't know how to use appropriate cultural sensitivity to get out of the party or the outfit.
No, really, this outfit is impossible to get out of.

Happy Labor Day everyone!
From Haiti, with love.