Pray for the Elderly

I sat next to Cynthia Powell (quoted in article) on the way out of Haiti Wednesday night. She shared her heartache over what she'd seen and experienced while in Haiti. I am thankful that she is concerned for the elderly and hope others will be also. The elderly in Haiti deserve the worlds best treatment ... they have seen and lived through much hardship and heartache. 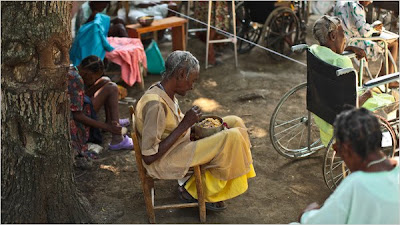 LÉOGÂNE, Haiti — Junie Sufrad, 110 years old, stopped suddenly as she described what life was like in the Haitian countryside before electricity, paved roads and cars.

“I don’t know if it makes me lucky or unlucky to still be here. It’s like part of me is gone.” — Junie Sufrad, a 110-year-old survivor of the Haiti earthquake.

“I don’t know if it makes me lucky or unlucky to still be here,” she said after a long pause, adding that although she was missing no limbs, the January earthquake had made her an amputee. “It’s like part of me is gone.”

Ms. Sufrad is a monument to the past in a nation that has been severed from it.

Like other aged survivors of the earthquake, she is a rare repository of this country’s history and culture, but she said she considered her memories as much a painful burden as a proud legacy.

No strangers to hardship, elderly Haitians find themselves distinctly vulnerable and emotionally burdened these days. They have grown old in a place where so many people die young. With longevity comes survivor’s guilt.

“You’re not supposed to outlive your children and grandchildren,” she said.

A preliminary census released last month by an aid organization found that roughly 7 percent, or about 84,000, of the estimated 1.2 million Haitians who had been displaced by the earthquake are over 60 years old.

The United Nations also released a report last month stating that despite the privation facing younger women and children in Haiti since the earthquake, it is the elderly who are now by far the most at risk. Older people have been overlooked in relief efforts because they are more frail, less mobile and less vocal in their demands for food and water, United Nations officials explained.

But the needs of the elderly that are proving most elusive, advocates say, are intangibles like security, continuity and hope.

Alongside the cracked remains of the Municipal Nursing Home in the Delmas 2 neighborhood of Port-au-Prince, nearly 3,000 homeless people have taken up residence in what used to be the nursing home’s tranquil courtyard.

“I just want to go home,” said Jacqueline Thermitis, 71, a nursing home resident, as she looked out at a sea of corrugated tin, draped sheets and plastic netting.

Already disoriented by age, a man in a wheelchair seemed even more confused as he asked her when they were going to return to Port-au-Prince. “This place is terrible,” he said.

Routine, which for so long has been a guide to the 75 former nursing home residents, is gone. So too is privacy and dignity as bathing and defecating are now done using buckets in public.

About half of them said they were too scared to go back inside when the nursing home was repaired. That means that many of them who are already sick will be weathering the coming rainy season in shabby tents.

To avoid violent scrums, relief workers have stopped the dumping of prepackaged meals and bottled water from trucks as their method of distribution. Instead, they have been handing out supplies in bulk to women who wait in long lines that stretch around the block.

But the system is still ill suited to older people, advocates say.

“Does it really make sense to ask a 70-year-old to carry a 50-kilo bag of rice or to wait in line for two hours?” asked Jonathan Barden, an emergency program manager for HelpAge International, an advocacy group for the aging.

A disproportionate number of the more than 200,000 fatalities of the earthquake were people over 60 years old, according to the United Nations. That is primarily because the elderly were more likely to have been indoors rather than coming home from work or school when the disaster struck that early evening on Jan. 12, officials say.

The older residents who survived — or at least those who came through with their faculties intact — seem acutely aware of the historical scale of the damage.

At Champ de Mars park, Michel Fretond, 82, pointed out that Haiti was the world’s first independent black republic. “Now, the clock has been set back to zero,” he said, with a scoffing laugh.

Not far away, the National Palace and the Ministries of Justice and Finance lay in various states of ruin.

At the Direction Générale des Impôts, the national tax office, men in blue jumpsuits used jackhammers to drill through a pile of concrete slabs and tangled rebar. Buried there — they hoped — were the remains of logbooks and paper ledgers with vital information used for driver’s licenses, passports, license plates and identity cards.

“It doesn’t make sense that I’m still here,” Mr. Fretond added, describing how his two children and three grandchildren were all killed in the earthquake.

Indeed, Mr. Fretond, and others of his age, are a rarity here.

Roughly half of Haiti’s population is under the age of 18 and life expectancy is 61 years, compared with 78 in the United States.

And yet, because of the impact of H.I.V. and AIDS on middle generations, and because parents often leave the country to seek work, the elderly have historically played an important role in Haiti in caring for younger family members.

More recently they have been serving other purposes.

“In the villages, the elderly end up being the ones who know who lived in a particular house, who was the parent of a certain child and who owned what land,” said Michel Bonnardeaux, a United Nations spokesman, adding that the United Nations has called on elderly villagers for help in starting a national registry of birth certificates or property deeds.

“Their memory is a national resource,” he said. “At least to us.”

Cindy Powell, an aid worker with HelpAge who is collecting oral histories from older Haitians, said that on occasion she overheard the elderly escaping the present by sharing a laugh about fonder days. But those moments were fleeting, she said, and those conversations drifted into a melancholy silence.

Back in Léogâne, the epicenter of the earthquake, Ms. Sufrad was fielding questions again last month about her childhood.

Dates escaped her. But she recalled traumas of the past five decades: earthquakes, hurricanes and the “men with machetes” in the Duvalier years.

She smiled widely as she told about her first taste of ice cream and about getting in trouble for sneaking out as a teenager to go dancing at Carnival.

Her fondest recollection was of marrying, “sometime when Borno was president,” she said, referring to Louis Borno, who governed from 1922 to 1930. Her saddest memory was of seeing one of her sons go to prison.

Asked why she thought she had survived so long and what the future might hold, Ms. Sufrad shrugged.

Rather than looking forward or back, she said, she preferred looking up.