The stories of two January 21 babies: 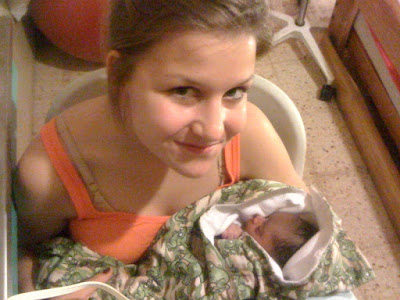 You've heard us say in the past that one of the great joys of living here is being privileged to be sitting front row to some mind-blowing miracles.  This is not to say that miracles don't happen in the developed world; it is only to say that here in Haiti - the things that happen often scream "miracle".

Beth recently told me that when a midwife friend from California scoured the files of the prenatal ladies, she found that in 2010 every single birth that ended with a baby needing emergency help, it just so happened Dr. Jen was in the room.

The first baby born into the program once we added the labor and delivery piece was born September 15, 2009.  Since that time there have been a handful of very scary situations.  There are times when it is totally necessary for a skilled pediatrician to be in the room.  Beth never knows when those times will be, she doesn't necessarily ask Jen to come attend births.  Jen sort of attends according to her schedule/availability. As you likely know, Jen splits time between Haiti and Minnesota.

Last night I was leaving to go cheer Beth and Jonna on at the end of a long labor and delivery with a young mom named Roselore.  It was about 10pm when I left home and as I got up to leave Paige and Jen decided to come with me.


When we walked out of our house I said to Jen, "You really want to come?" She had already had a long day and I wanted to let her off the hook to go to bed.  She said, "Yeah, I think I should come. Maybe they won't need me and that's fine."

At 12:09 on 1/21/11 a baby boy entered the world and went straight into the capable hands of Dr. Jen as she got him breathing and responsive after a pretty stressful birth.  (Jonna and Beth turned their focus on Mom.)

As it turned out Beth and Jonna (both fabulous and amazing midwives) needed the support of all three of us - but especially Jen.  It was an unusual birth with some unexpected twists and turns.  Had Roselore chosen to give birth at home both she and her baby would not be alive this morning. (That probably sounds dramatic but it is totally true.)  The power of prayer is something we never take for granted.  Those that support this ministry with prayer, thank you!


We're so in awe of the way God provided last night.  Mesi Bondye!

Exactly a year ago today another miraculous birth took place aboard the giant floating hospital known as the USS Comfort.

This story will always be one we hold tightly and carry with us because it serves as a powerful metaphor for the way God cares for the forgotten, lost, and broken - and is mighty to save.

He takes us from our broken, battered, messy places and He lifts us up and heals us.


One of the posts from the ship here.  (This is a Comfort Ship blog post.)


"On Saturday (which feels like a lifetime ago) Troy and John went into Simone Pele to visit with the people of that area and assess their situation. We have ties to the community due to a monthy pre-natal outreach we’ve been doing there. It is considered a rougher area by most.
On that day Troy talked with a young woman named Collette in Simone Pele. She is 7 months pregnant and had suffered a broken pelvis during the earthquake. There was a giant yard area where many were gathered and injured. They had not received medical attention. He was standing next to where she was lying and talking to other people gathered around. She grabbed his hand and made eye contact and said, “Pa Bliye’m.” (Don’t forget me.)
Troy told her he would be back to get her on Monday. She had been unable to move for days at that point.
This morning John McHoul (head of Heartline Ministries) and John Ackerman (a nurse in Haiti) went back to Simone Pele to get our first load of patients.
When they got to the house Troy immediately looked for Collette. They had not picked her up. There were so many with crooked bones or with bleeding, infected and oozing wounds that her broken pelvis did not look serious enough to get her on the first truck.
In the afternoon the first round of patients (that did not have to stay on IV fluid) were returned to Simone Pele. Troy needed to bring more patients back to the Docs and nurses. He was not going to leave without Collette. The guy that was with him kept finding other patients and Troy kept reminding him that he needed to keep looking until they found her.
After backing the truck in to get very close to her so she could be moved with the least pain possible, Troy got out of the truck to hear Collette screaming “Merci Jezi, Merci Jezi” while waving her arms wildly.
Troy said it was all he could do to spit out the words, “M pa bliye ou” (I didn't forget you) without bursting into tears in front of all the tough guys standing around watching.
Tonight Collette rests under the care of volunteer Docs and Nurses at the Heartline Women’s Center house."


A couple of days later -
Excerpt from this post ...
This is where the day went cuh - razy. The Doctors were quickly realizing that even though they were doing some pretty big surgeries and risking a lot --- we still had people on our hands that we absolutely could not do enough for. One of those patients was Collette that I told you about a couple of days ago. (Pa Bliye'm story) 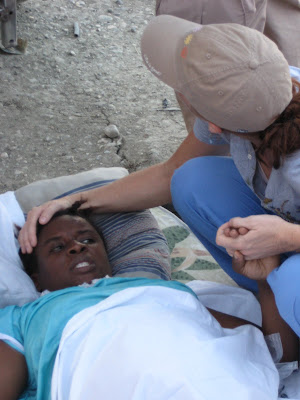 Dr. Jen decided to research how close the USNS Navy ship was to arriving and emailed contacts she has from earlier this year when we got to go visit the Navy ship that was here. We did not hear back and did not hear back and the afternoon was getting away from us. We had 11 people that we hoped to take but could not get the 100% go ahead. On a wing and a prayer we decided to load our patients and try to find the spot to get them on the ship. We had like ZERO information. But off four vehicles went in a row to try to find the right spot in a crazy city of millions.

Finally we turned down a road that we hoped might lead us out to the water. A man rolled down his window to tell us we were heading towards Americans. We pulled in to find about 30 Americans setting up camp. They were unloading dump trucks and starting to set up their first large tent. The two docs that came with the patients approached and asked if they could possibly help us. They told them that we'd heard the U.S. Navy was sending a ship or serious operations and very high need cases. They shook their head a bit and explained they had JUST arrived about 60 minutes before us and they were not even set up. They said they would try to radio the boat, but it was not really yet set to go either. Gently Dr Jen and Dr McKnight asked about getting a helicopter to take our patients. They seemed sort of non-committal - we knew it could go either way. The last thing we wanted was to return to our little make-shift hospital with 11 people that really need surgery.

We waited for our miracle.

All of a sudden out of nowhere a helicopter circled over a time or two ... then swooped in. It landed right out in front of us. Two studly helicopter military guys walked over and said they could take four people. We chose the four worst. They said "We'll be back in ten minutes for more." We could not believe what was happening. They came back ... and back. Three trips to the ship for the people of Simon Pele. I asked a couple of the patients that I had connected with if they were afraid. They seemed to know that something big was about to happen. How humbling it was to watch the poorest of the poor ... forgotten by most ... be some of the very first patients to arrive by helicopter to a US Navy Hospital floating in the Port. I stood there weeping as they took the last group up.

We left Heartline on Jen's hunch - with almost no location information and no certainty we would be received - and we found the American base, that had only been in place for 60 minutes, that led to the helicopter coming, that led to hurting people getting help.

Hurray for justice. Hurray for miracles.
at Friday, January 21, 2011