Rooster, it's what's for dinner. 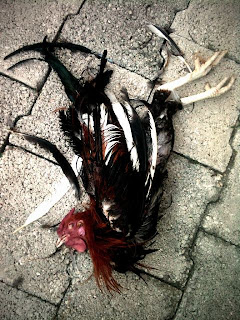 Next door to us is a man who has a "hobby" of owning and raising birds.  He built them a two story house of their very own. (Like you do.)

We would estimate that there are upwards of 100 roosters, chickens, pigeons, and other dirty fowl living about 10 yards from our house.  The amount of noise they make is comical.  Sometimes in the morning when they are at their most boisterous it is hard to hear each other in regular conversation. Most of us have learned to accept it as background noise. Sometimes we don't notice the ruckus.  Thankfully they seem to sleep from about 5pm until 2am; there is a nice chunk of time of relative quiet.  T.I.H.

Last night there was a little rumble in the hood.  Somehow this rooster ended up on our side of the cement wall and went to meet his maker at the hands paws and jaws of one Peanut Livesay.

This morning there was much excitement at finding this. (photo above) Troy and Geronne debated about how to dispose of it.  In the end Troy pitched it back over the wall to allow for proper grieving and closure for his relatives.

A little later Lydia went under the table to show Peanut the photo of the dead rooster on Twitter.  Who doesn't want to reflect upon their accomplishments and bask in a moment of self-congratulation for at least a moment? In other gross animal news: 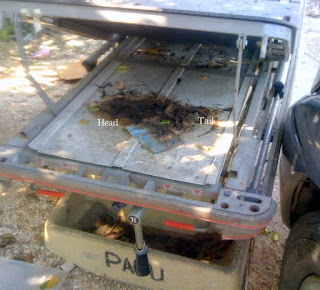 Jen and I pulled into the Red Cross yesterday to donate and pick up blood.  We commented on how odd it was that they abandoned a gurney/bed in the parking lot.  Later, I ran to the truck to grab some hand-sanitizer and my phone and I noticed what I had missed at first ... The deceased lying on the gurney.  How nasty is that? 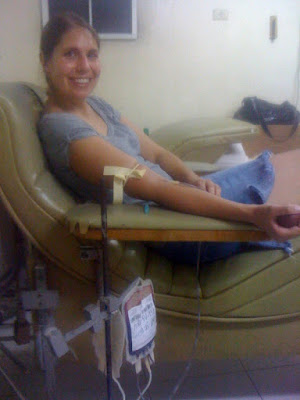 We both happen to have a highly desirable blood type. ("Superior blood people", as named by Troy on Saturday.) We went down there in order to be able to get blood for a patient from Cazale.

In Haiti you need to give blood in order to get blood. Jen gave blood.  I tried. They wouldn't allow me to donate because my BP was too low. It was a bazillion degrees in the room, but Jen remained upright. We watched a few minutes of a movie with Steve Martin speaking French in a voice that did not match up on the television.

After waiting a while we were able to transport blood across town to the patient Jen was helping.  (Like you do.)