From an American that was trapped in the rubble.

"The certainty of life is things move forward whether you are ready or not. While I can so easily transport myself back to that potential coffin of rubble and the emotions that go along with that reality, a year has passed and my exterior marks are fading. I know that my scars on the outside do not have to mirror those on the inside, but their slow departure feels like pressure to move on and I am not ready. So what to do?" -Jillian T.

From her husband, Frank.

"For most of the international community, the one year anniversary was used as a barometer for what has, or has not, been accomplished by the government and aid agencies to help the victims of the quake.  Only 30,000 transitional shelters have been completed, only 10 percent of the rubble has been removed, over 800,000 people are still living in tents.  These are all outrageous, and worth discussing, but when the day came, Haitians could care less about where they were getting their water, or where they were going to sleep, they just wanted their loved ones back.

So on the day of the anniversary, most people weren’t screaming about their situation.  You didn’t see them taking to the streets to complain about how the recovery here can only be described as stagnant, you saw them flooding the churches and praying, you saw them taking the day to reflect." -Frank T.

Please follow the links to read both moving posts in their entirety.
~~~~~~~~~
A year ago today five of our kids landed in New Jersey at an air-force base tired and scared but safe and well cared for; I am grateful to my government for coming for them.  We had all the choices in the world, we are the privileged.

After reading Frank and Jillian's posts I got to thinking about how many stories haven't been shared. It is overwhelming to consider how many experiences and tales of those days will never be known.
I'm thinking today about all the people who never got to tell their stories because all around them were thousands of people who were not in a position to sit and grieve or listen to them .... They were also busy finding their own loved ones or trying to find a way out from under rubble.  When an entire city is gripped by grief and loss all at once there aren't enough ears to listen and console.  I hate that.
It is true that time heals wounds but in my observation, for the Haitian people, the emotional healing has only just begun.
~~~~~~~~~~~


Below, earthquake amputee Jean (11) with his prosthetic leg and Lydia with Jean after he took it off before bed-time last night.

Jean is the same boy pictured here at this post. 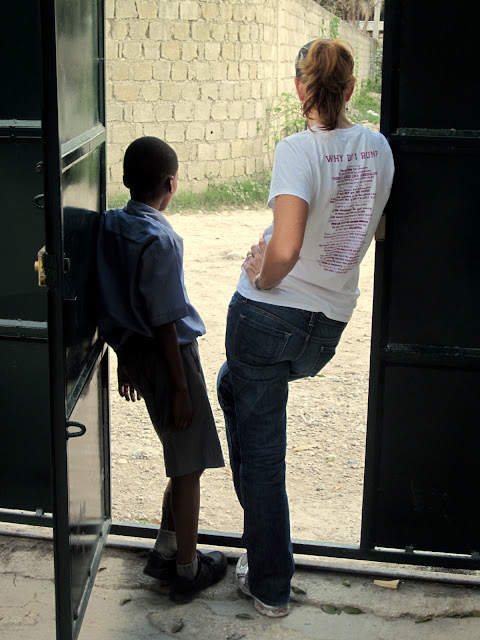 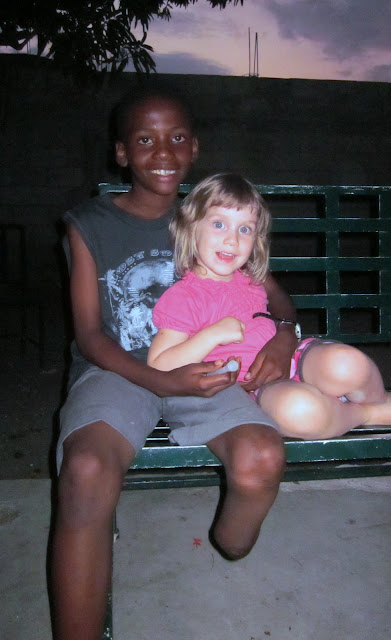 A little later today we're taking Jean to be fitted for a bigger leg. He has grown enough that his current leg is a bit too short already.
at Saturday, January 15, 2011