Today we gathered to celebrate the life of a beautiful little boy named Kenny. His mom cried as we sang happy birthday in Kreyol and English. Her tears were tears of pure joy and deep gratitude for the life of her son.

It was a beautiful thing to witness.

Born after the earthquake in one of the most intense places on the island this premature and tiny little boy was plucked out of the slums by earthquake medical relief workers and brought to the Heartline field hospital where many volunteers went to work saving his life. He was transported to another hospital that possessed necessary equipment and there he remained for a time getting stronger, beating the odds, fighting for his life - while many of you prayed. 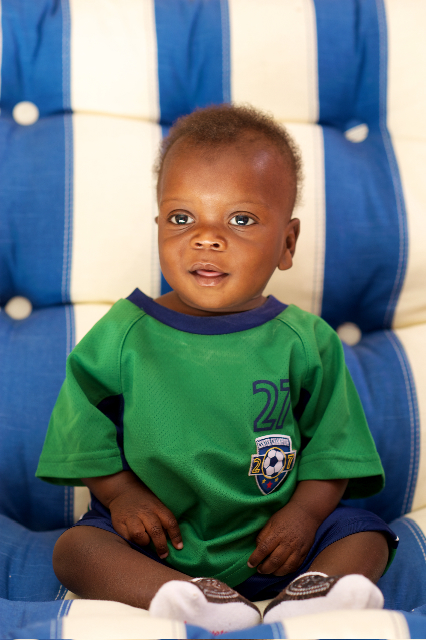 Today he and his brave momma are treasured friends. They are part of our family. They live in the safe place called "Harbor House". We believe in them and we love them. Most of all, we know God has only just begun to work miracles in their lives.


Written February 19, 2010 By Barbie B.  (Take time to click over to Barbie's blog. You won't be disappointed. She is currently in Haiti again and has a beautiful & unique way of sharing her experiences working as a Physicians Assistant here.)

"Today our medical team found a young woman with a 17 day old baby in the field. A three pound baby. The baby was dying. Dehydrated. Heart rate and oxygen level and glucose dangerously low. Small red spots of petechia -- meaning life threatening infection -- appeared on his body in front of our eyes. Together our team, led by our physician, a volunteer pediatrician, with innovation and urgency, were able to stabilize him with our limited supplies. We packed his fragile body into a truck and drove to Miami tent hospital, begging them to take him to stabilize him with their more advanced tools and supplies. The tents have perhaps a hundred patients each. The staff are exhausted. They take the baby. Overwhelming.
The world needs to hear the strangled, sobbing wails of a young mother, who fears for the life of her dying infant, one final loss in an intolerable string of losses. The deep, soul baring sobbing wail of a mother losing her only child, going on and on in a darkened truck, street after crumpled street in the tropical smoky night. Infatiguable fear and grief. Child's prognosis grim. But a small spark of hope remains. So is the sound of the devastation of Haiti.
In the dark, we returned from our journey to our field hospital, soul filled with the mother's devastation. As I opened the metal gate from the dirt road, in the darkened tented courtyard, we found all of the patients singing loudly in deep prayer, arms raised over their heads. They had called the medical staff to the courtyard...and were singing to them. A deep soulful harmonious blessing. Nurses stood, stunned, eyes filling with tears, as their patients rose up in song, honoring them, praying for them. So is the sound of the soul of Haiti. The sound of hope, and joy, and love, and strength. Haiti...Such a strong word."

"We arrive at the hospital and the question of the morning is, "How is the baby?" -- the 3 pound dying infant from the night before. "He's alive, and breathing on his own..." are the words that create a good start to the day. The sick child was found in the arms of his mother in the crumpled slums last night by our astute medical team, who had spent the day in devastated neighborhoods looking for ill patients unable to access care. If he had not been plucked from the streets, he would now be dead. And now, he will live. I wonder what he will become. And, what will become of so many of these children...the fragile future of this country."
Written in July 2010 by Beth McHoul:

We met Djenie when baby Kenny was 3 days old, weighed 3 pounds  and was very sick.  Our big, white truck was doing its rounds in lower Boston, Cite Soleil and found them among several others who were wounded and sick.  Kenny needed to be treated and Djenie who was in the midst of post-partum  was frightened of us and  wanted to go home.  She didn’t know what to do with this baby and didn’t know what to make of us.  Our doctors treated Kenny, we worked with her on breast-feeding and sent them home as soon as possible since she was so despondent being with us. 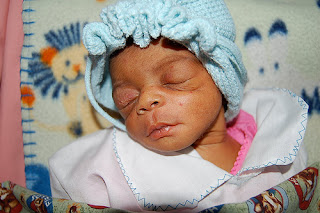 Three weeks later they returned on our big white truck.  He still weighed 3 pounds and Djenie had a raging breast infection.  I was attending to Djenie while nurses took Kenny who was wrapped in a blanket.  He was near death.  Our medical team jumped into action and life saving measures were taken for this little guy.  We sped him to Miami Field hospital where he stayed for several weeks.  That first night we were sure he would die.  Djenie was sure he was fine and kept wanting to go home.  When it finally sunk in that he wasn’t fine she wailed with a wail that broke our hearts.  God hears.
Day after day we brought Djenie to the field hospital to visit.  They bonded.  Breastfeeding finally took.  Love was born – a love that is continually threatened.  The odds have always been against her being a successful mom.  Her family is violent and there are many of them living in a small shack.  The baby’s dad died.  First we heard he was dead by gunshot and then he in fact died in a fight by a crushing blow by a cement block.  Djenie wailed that gut wrenching wail again.  He too was a teenager from one of the most violent neighborhoods on earth.
Over the months Djenie and Kenny became part of our hospital and lives.  We (Beth) kept saying he could be discharged when he weighed five pounds.  Then ten.  Then fifteen.  He’s over 16 pounds and they are still with us.  He is chubby, breast fed and permanently hooked to his mom’s hip.  She runs to his every whimper.  Parenting skills have been gained.  Her teenage responses to his cries have vanished and a real mom has emerged.  The mom who wouldn’t rouse to feed him now jumps to his every cry.  She’s grown.
Djenie goes home to Cite Soleil every now and again for a few days.  Her mom and mom’s boyfriend tell her she can live at home but not with a child.  They continually advise her to give him to an orphanage.  The dad’s mother has offered to take Kenny but not Djenie.
Orphanages can be wonderful places of refuge for the abandoned child and when a mom dies.  We ran a crèche for many years.  There are times when this is the best answer.  We love adoption and gave many years to making adoptions happen.   There are also overcrowded, understaffed orphanages where children do not get the care and parenting that every child should have.  Haiti is loaded with these places.
Djenie helps us at the women’s program.  She is a comic and makes us laugh.  She is moody, fights with others patients and then comes running to me to bail her out.  I always do.  One of her jobs is to help with pregnancy tests.  We give a lady a cup, tell her to give us a urine sample and then we give her the news.  Eager to help Djenie told a woman to go pee in a cup but told her to pee in the yard instead of the bathroom.  We all laughed.  Djenie giggled.  The woman didn’t realize what was funny – this is Haiti after all.  Bathrooms aren’t always available.
Yesterday some of our patients took their babies to a local Haitian  orphanage for a government vaccination program.  I watched them take kids hand in hand down the street to do their motherly duty.  They know vaccinations in Haiti are important.  They want to be responsible.  Djenie carried Kenny and off they went.
A few hours later Djenie came to me and said that the woman at the orphanage offered to take Kenny into the orphanage seeing that she was a teenager.  Djenie said,  "no thank you".
Then the woman offered to buy Kenny saying she would give Djenie a lot of money for him.  Djenie again said, "no thank you, I have people that are helping me".   I listened and told her what a great mom she is and how correct she was not to give Kenny to this woman.  I was calm.  Inside my blood was boiling as questions raged.  Why did this woman want Kenny?  Don’t they have enough unwanted children?  Why was she singling him out and wanting to buy him?  Would she turn around and sell him for more money?
They are a team – Djenie and Kenny.  With help they have made it this far and are well connected.  He is healthy – and she is growing as a person.
~~~~~~~~~
A few of today's photos ...

Djenie headed out after the party to go see her Mom and Grandma. She was excited to visit them with Kenny and bring them left-over birthday cake.  Just as the party broke up she asked if we would pray for her before she returned for a few days - back into the complications and challenges of her life in Cite Soleil.  We were honored to be asked and honored to pray with her.
Bondye Bon.
God is good.
at Thursday, February 03, 2011