More than five years ago Beth McHoul, co-director of Heartline Ministries, had a strong sense that she should start a new program. Beth desired to respond to the incredible need for quality, respectful, maternal healthcare in Haiti. Additionally, she hoped to encourage young mothers to raise their children and avoid poverty-driven decision(s) to place their little ones in an institution.

Asking God for guidance, setting aside much fear, she  slowly forged ahead and began with a very small program that met each week to offer education and vitamins. Along the way multiple friends from multiple countries encouraged the growth of the program with their ideas, guidance, prayers, and donations.

What began as a very small and quite undeveloped program is now an organized, high quality, beautifully functioning prenatal and labor & delivery program. The number of women concurrently being served has changed from twenty to about ninety*.

*Forty-two pregnant, forty-five in early childhood development. This number does not take the Depo Provera Family Planning program into account. That program is serving more than 500 women.


The dream and desire of twinning and even tripling the size of the prenatal program is alive in the hearts of the Heartline team.  Heartline owns a piece of land and with your help has already raised $145,000 toward building a new Maternity Center on that land.

We are excited to be growing responsibly and looking forward to the day the money is raised and the new maternity center can be built.  We believe that these programs are deeply impacting the women in our community and saving lives.

There is an enormous effort underway to spread the word beyond the current faithful base of Heartline supporters. We are excited to share more about that effort with you soon.  For now, we want to tell you about the weekend ...


This weekend the five-year-old vision for better and more respectful maternal health care services equaled three precious new lives being ushered into the world safely.
All three births were prayed over, sweated over, watched over, and very important to the staff at Heartline Ministries. 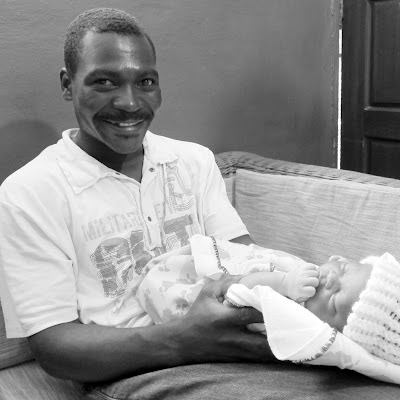 1:
Lumana and her husband had been patiently waiting for the birth of their second child.  By her choice Lumana had lived in the Heartline postpartum room for about a week in late August because her home is far away and she feared she couldn't make it in time.  She waited for many nights and then decided to risk it and finish out her wait at home.

Saturday morning around 7:30 am Lumana arrived almost completely ready to push her son into the world.

The first baby to join us outside of the safety of his Mama this weekend was little Roodens.  Lumana delivered him shortly after 9am with the additional love and support of her husband who sat on the edge of the bed touching her head while praying for her as she pushed.  This precious little family spent about 36 hours in the postpartum area before Heartline provided transport home late in the day Sunday.  Lumana and baby Roodens will come to class each Tuesday for the next six months for further education, support, and follow-up care. We're so thankful for God's protection over this delivery. 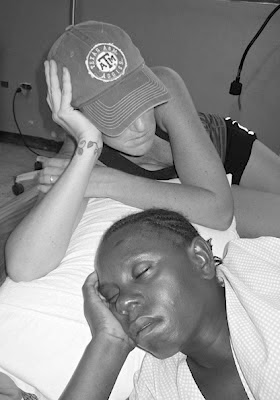 Nadege is the sister of a former client of Heartline.  Easily the shortest woman we've ever had in our program, we wondered how such a tiny person would fare during labor and delivery. Nadege arrived at 9:30 am on Saturday morning.  She labored beautifully and with much courage all throughout the day Saturday.  At around 4pm it became apparent that her little one's head was cocked at an odd angle in her pelvis and was not descending well.  With some guidance and prayers, attempts were made to adjust the baby's head. After a time it was decided that Nadege could not deliver with us and was in need of a C-Section.  At 7pm Nadege was loaded into the Heartline Ambulance and off we went in search of a hospital to receive her.

The first hospital kindly reported that one of their two operating rooms was down and that because of that they could not receive her for surgery.  This is not an uncommon answer when searching for medical care in Haiti.  We went to a second hospital that serves those with high-risk deliveries and they were able to confirm that they agreed a C/S was the only option for Nadege.  They accepted her into their care.  Because of the high volume of need and the lack of beds, Nadege and her son were discharged 38 hours after her C/S and are now on their way to Heartline for post-partum care. Nadege and her new son will come each Tuesday for the next six months for further love, education, and follow-up care. We're grateful Nadege and her son got the care they needed.

3:
Shedlyne is a 23 year old first time mother.  She was married earlier this year and is blessed to be part of a large family that offers much support.  Throughout her entire time in labor she had a cheering section waiting on the front porch and taking turns helping her. At times her father, her sister, her sister-in-law and her husband were all there at once.  Other family members dropped in on occasion.

Shedlyne was the first to arrive this weekend, and the last to deliver.  She arrived shortly after midnight on what was technically Saturday morning.  She labored slowly and somewhat unproductively all day Saturday.  She went home for a few hours around 7pm Saturday evening, then returned afraid and in pain again about five hours later.  Shedlyne had a long and difficult labor.  Not unlike many small first time moms it took her quite a while to find her groove and cope with the pain. After two+ hours of pushing and some fairly intense moments Shedlyne delivered her 5 pound 10 ounce baby girl at 2am Monday, 49 hours after she first arrived at the Maternity Center.

Baby Regina needed a little extra encouragement and attention but got the hang of breathing after a few minutes.

Shedlyne and baby Regina will also come to class each Tuesday for the next six months.

Please be praying for these precious new lives and for healing for their mothers.  We're so thankful to have the ability to call on the Great Physician during these unpredictable labors and deliveries. He has been faithful.

Please also stay tuned for more exciting information about the new maternity center and how you can help make it happen.