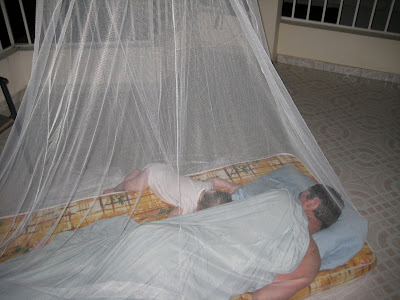 One day we'll have this whole EDH/Inverter/Battery/Generator thing figured out. Right now, we are not even close. (Prior to this EDH was a non-factor - so we are relearning as big-city dwellers). The EDH pooped out early yesterday, so being the wise ones that we are we ran the generator right up until the time the neighbors get mad. We shut it down at 9pm on the dot. We figured we would make it till EDH came on -- and even if EDH did not come on we should have been able to make it until 4 or 5 am.

At about 11:15, Troy and I were finishing up chatting with Jamie and Aaron Ivey and Luke Renner - just before shutting everything down to head to bed, the house went pitch black. The collective groan could be heard around the house. Paige came out and said, "What? It is not even midnight yet!"

The neighbors would absolutely pop a clog if we started the generator at midnight. So we hoped for the best and thought maybe we would just have to wait 45 minutes and EDH would save us from the babies and the bugs. Troy jumped in the baptismal. Paige and I stood and talked to him. At midnight nothing happened. We all started staking out our alternate sleeping locations.

I decided to try to sleep in the back seat of the truck. (No bugs there!) Paige went and got a blanket to sleep on the driveway. I found that an odd choice, but that is where she decided to set up camp. Troy headed up to our 104 degree room.

At 2:30 I woke up in the truck drenched in sweat to see Paige asleep in the driveway with a candle next to her (drawing bugs?). I came upstairs and found Troy and Lydie out on the patio under a mosquito net. Troy woke up and went to our bed. I laid near Lydie but the bugs were eating me alive.

At 3:00 Lydie woke up again. We laid on the patio hugging and talking for about an hour and a half. The Roosters were crowing and Lydie was mimicking the pattern by saying, "ha ha ha ha haaaa" (she is not even one yet, maybe by then she will be able to do the full cock-a-doodle-do). At first I did not know she was trying to mimick them, when I realized what she was doing I started laughing so hard.

At 4:15 Lydie went back to sleep under the net and I went in to check everyone else out. Isaac had come to bed with Troy at some point. Paige was still in the driveway. Phoebe and Hope remained in their original spots. Noah was missing. I found a flashlight to start searching for him. I looked everywhere upstairs (where three out of four bedrooms are located.) I was just starting to panic and wondering if I needed to check the stinking swimming pool. (You know that sick feeling you get when the search does not turn up the result fast enough.) It took me a long time to find him downstairs curled up in Paige's bed.

I went back to the patio to be near Lydie. I think I slept for six minutes.

At 5am I carried Isaac back to his bed, brought Lydie in from the patio, tried to talk Paige into moving into the house, and begged Troy to tick off the neighbors and go start the generator. (Choice A - tick off neighbors - Choice B - tick off wife) He went to start it.

From 5am to 7am I think we all sort of slept. Yee-haw.

This morning Noah woke up and said, "I tried to find you guys all night. You were not in your bed, you were not downstairs. My fan was not wuh-king and I was vewy wuh-weed!"

As near as we can tell he was looking for us when I was in the truck and Troy was on the patio. When Paige finally got up today, she said Noah had laid with her for awhile on the driveway but got tired of the bugs and left.

We're all covered in a fresh set of bites and tonight we will be shutting every computer, light, toy, toaster, and washing machine off much earlier to try to get our fans to take us a lot further into the night. Being on line too late did us in last night. (We blame you Aaron Ivey.) ;)

Tonight we hope to delay the game of musical beds until at least 3am. This too shall become normal. :(
at Sunday, September 28, 2008