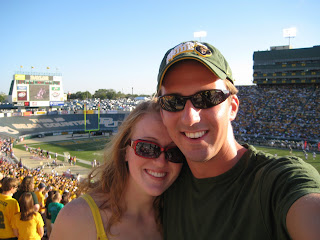 Once again, pressed for time ... so will keep it short.

We want to thank you for asking about Gonaives and Cazale and Cabaret. We hope you'll continue to lift these people up in prayer as they have very little to start with and now need to rebuild their lives. We hope the next group of storms cut a wide path around Haiti.

We went to a barbeque /family day at the kids' school today; it was a lot of fun. I laughed when Hope handed me the information and said, "I think there will be wine there too!" I have no idea where she got that. It was a morning event and I guess whoever told Hope there would be wine was misinformed. :) When Isaac came home he said, "Mom! Dad! There is Barbancourt at school tomorrow!" (He meant barbeque.) Those of you who have been here know that Barbancourt is the name of both the nationally produced Rum and then the name of a few villages. We found it odd that both our six year olds seem to be focused on alcohol. What is that???? Must be Troy's influence.

Troy wants to solve the dilemma we are in with Hope/Kindergarten and work/ministry and trouble being two places at once with one vehicle by buying a motorcycle of some variety. I happened to be named after an uncle (Terry) that died on one -- so I am against this idea. I am taking a poll. Should a father of 7 (plus a little Annie girl for now) be risking an accident on a motorcycle? Answer the poll on the left side of the blog. The poll will close if it looks like it is not going my way. ;)

(ACK. I spelled it wrong on my poll. :( It won't let me edit it because someone voted already.)

Britt and Chris are entering week four of this semester at Baylor and are securing employment and seem to be doing great. We all had a "we miss Britt" day today so we were excited to see this photo. I have never thought of being in Haiti as a "sacrifice". I struggle with that whole concept because I don't think it is at all -- if you want to be where you feel God has called you, I don't think it can be considered a sacrifice --- but I digress. I do think there are costs ... and one cost is missing out on some normal college stuff with our oldest. We wish we could be there and be involved - sometimes it hurts to know we're missing big things in her life. The people in our family count that cost as they miss us too. We really need internet so we can instant message and reconnect with her and the rest of the fam soon.

It has been mighty toasty this week. (News flash) I know I sound like a broken record. SORRY! I just gotta gripe once in a while, you know!??! This was shirt one of Thursday -- about an hour into my day. Blech. As soon as a sweat outline of your undergarments is in fashion --- I will be SO set. 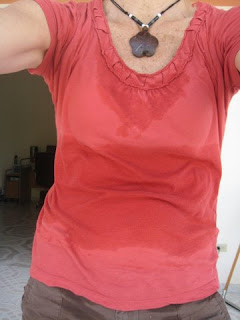