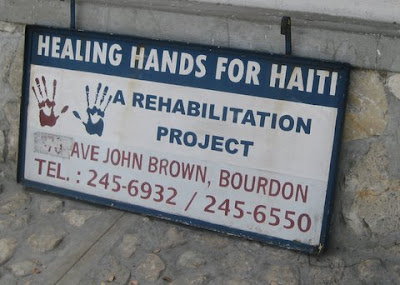 We met on August 17th. Our home church from MN was visiting and we stopped by his home. As is often the case in , we got the wrong story the first day we met.

After spending last Thursday with we now think we have a little better handle on the story. It is important to remain open to an evolving story, culturally we are on the outside and may not get the whole picture for a time. We do know that God placed on our hearts so we’re moving forward to see what we can do and why that is the case.

is 24 years old. He is 1 of 9 children in his family. He is the seventh born child. His family had four boys and five girls. He is a very soft spoken and mellow young man. His brother in law attends the appointments and is helping navigate things for .

In July of 2007 was in – a larger town almost half way between Port au Prince and St. Marc – when a Tap-Tap (the public transportation system) backed up and crushed his left leg. had a lot of pain and swelling but was able to walk on it. He did not think it was bad enough to see a Doctor and he went about life and dealt with the pain. The pain lessened and he even says that he did not have trouble with it at all for a time. In January of 2008 the pain became very bad. By April of 2008 could not bear weight on the leg therefore he quit walking at that point. His family took him to Hinche to a hospital there. That hospital referred him to the Partners in Health facility in Cange. They sent him back to Hinche where by May ‘08 a Doctor determined the leg should be amputated. The reason given was “cancer”. The leg was amputated and spent 13 days in the hospital healing. He said the pain was incredible after the surgery. 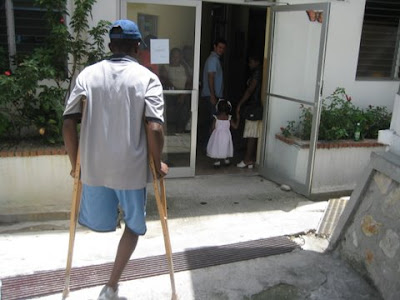 He has been using crutches and is very good at getting around on them. His home is on top of a mountain. He gets up and down the mountain on a donkey.

On Thursday we took him to Healing Hands for . This ministry specializes in rehabilitation, physical therapy, and prosthetics. We were so happy to run into a guy working in the rehab room who had a full prosthetic leg. He took time to talk to about it and said that his leg was fairly new but he was happy with his own progress. The visiting Doc from at Healing Hands last week had a concern about a calcium deposit at the site of the amputation and sent us for X-Rays. We will return the x Rays on Thursday. We’re hoping that the x ray shows that it is nothing serious. They will take measurements and a mold to fit with a new leg.
We’ll keep you updated as we move through the process with at Healing Hands.
at Monday, September 15, 2008