I had the amazing privilege of escorting some of the Heartline hospital patients to a rehab clinic/prosthetic lab run by Handicap International today. It was awesome to see the culmination of cooperative efforts between Heartline, Merlin hospital, and Handicap Int'l resulting in new life and hope for these patients.
Meet Emmanuel: 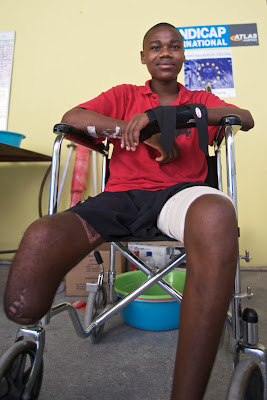 Emmanuel is twenty years old. He was trapped beneath the rubble of his home for three days after the earthquake on January 12th.
He was brought to Merlin Hospital - run by an organization from the UK - where he had his leg amputated and multiple skin graft operations performed in their makeshift field hospital set up on a tennis court. 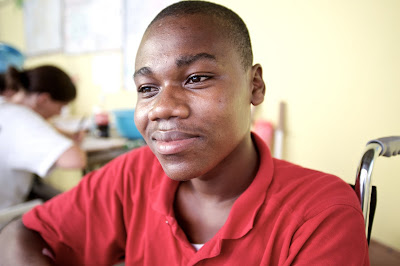 Emmanuel was transferred to the Heartline hospital for after-care and physical therapy. Today he was fitted for his new prosthetic leg by Handicap Int'l.
On the way home from our appointment, we passed by the remains of the house he was trapped under, and then he proudly pointed out the place where he used to attend high school. Much of the rubble has been removed from the site - and all that remains is a singular wall with blackboards from a first-floor classroom. There used to be four more stories above this one. Afternoon classes were in session when the earthquake struck, and the neighbors we visited with confirmed that many of the students were trapped in their classrooms and died in the building. 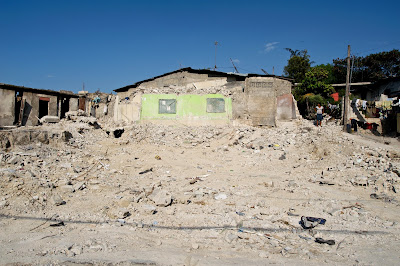 While we sat in the truck looking at the scene, the other patient in the truck with us broke the silence and told Emmanuel, "God spared your life."
As soon as I sat down and tried to write out some of his story, I realized that it is way to powerful and huge for me to capture with the written word. I know I am not doing it justice. And I know that in this life there most likely will never be justice for the thousands still suffering in the aftermath of this disaster.
I was humbled by Emmanuel's strength and encouraged by his hope as I got to know him today.
-Troy
at Thursday, April 08, 2010