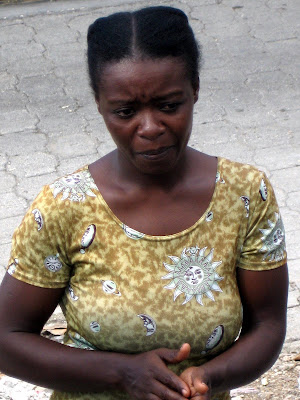 The woman pictured above is Marie Rose. She is a beautiful lady, a woman of great strength... a mother, a daughter, a friend - A courageous and tenacious Haitian woman. 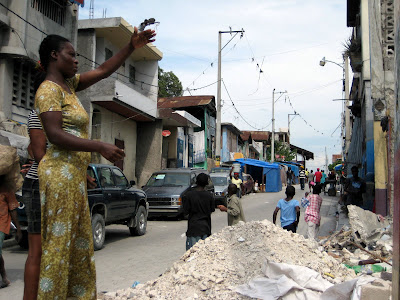 Here she stands looking at what was once her home. The home to the left of hers still stands. 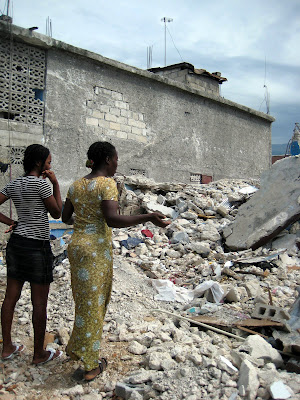 On January 12, 2010 at 4:53 pm she was walking on the street not far from her home near "La Ville" (downtown). Her four children were home, in a second-floor apartment she rented of a three story building.

The earth shook. For 45 seconds the ground trembled with great force.

She ran home as quickly as she could. There she found that the building she called home had collapsed and her four children were buried somewhere within the fallen cement blocks and contents of the house. Time stopped. Marie Rose felt and experienced unimaginable thoughts - things most of us will never ever comprehend or experience.

With the help of neighbors she was able to locate her youngest child Emmanuel, her three year old son. He had suffered severe facial injuries. Her other three children were unreachable, lost in the massive pile of cement, re-bar, and rubble. 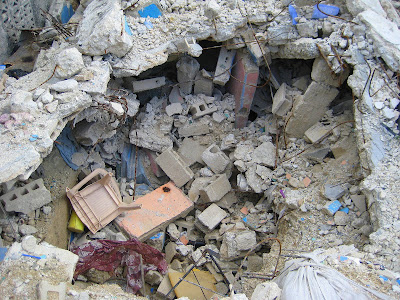 The choices Marie Rose had for recovering her other children were non-existent. The man-power to move large blocks of cement did not exist. She had to make a choice to focus her attention on finding Emmanuel help. She had to walk away from three of her children - she had to make that choice uncertain if they had passed away or were possibly still suffering.

Emmanuel eventually found help on the USNS Comfort Ship. It was on the ship that his first 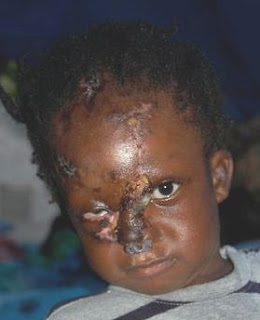 surgery took place. Emmanuel was discharged from the ship into the care of Heartline's volunteer medical team. He has been at the Heartline Field Hospital for several weeks now and has had at least two plastic surgeries to continue to re-build his nose.

"Pulling up in front of the house, Dr.Jen and I sat quietly as this usually amazingly upbeat woman looked at the fallen house and then looked straight ahead as she took several deep and agonizing breaths, before she got out of the truck."

"She tentatively climbed up and onto the rubble that was once her home and now was the place where the dead and decaying bodies of her three children still remained. The rubble had already been gone through by people looking to take whatever they could find and scattered among the cement blocks and steel were clothes, broken plastic chairs and a broken TV and not much more. I glad that the mama didn't look deep into one of the crevices and see the withered arm and hand that we saw in a hole among the blocks. The entire body could not be seen as it was buried beneath tons of cement blocks."

"It must have been a helpless feeling as there was nothing in the debris that could be reclaimed. She had lost or had stolen from her everything of value that she had in the house. No pictures, no special items of sentimental value."

Marie Rose lost a lot on January 12th, 2010. She lost her apartment, her place in this world. She lost three beautiful lives, her flesh and blood. She lost every single "earthly" possession that she had worked to acquire. She lost her sense of "normal". She lost friends. She lost her very way of life.

There are things we can do for Marie Rose.

We can pray for her. We can ask God to grant her on-going strength and miraculous provision. We can also give of our resources. We can be obedient and generous and find avenues to donate to help rebuild lives and homes.