I am not that Mom that scrapbooks, fills in baby-books, keeps artwork tucked away for years, or writes beautiful letters to my children. In my mind I am that mom, but in reality I am a total slacker. It is not that I don't find these children and their changing lives and personalities 100% entertaining and exciting ... that is not it at all. I simply lack the attention span for long-term documentation projects. I could never be a statistician.

I really wish I had better records. I remember poring over my own baby book and being thankful my Mom had kept a record. I can keep lamenting this failure, or I can write about/for these kids.

In 1990 a beautiful brown eyed girl was born to a 17 year old mom. The mom had every intention of documenting the milestones of her precious baby girl. Intentions do not get the job done, though. If you open Brittany's baby book you find her footprints from the hospital and her birth weight (my biggest baby by 1/2 ounce) and a few names of people that visited her in the hospital. I think I noted the day she was dedicated/baptized too. That's it. As is true for most of you, 1990 is not so sharp in my memory anymore and other than recalling the strange combination of deep joy and anticipation, mixed with the total consuming fear of messing her up I cannot tell you much about that first year of her life. I recall more about her as a six and eight-year old than I do as a toddler and pre-schooler. The gaps in my memory represent a time in my life I don't look back on fondly. There was a lot I could have done better. Today at 20 she is proof that God is gracious to cover for the mistakes of a young mother. If there is one thing I am thankful for it is the opportunity we had to bond during intense times as we prepared to adopt and lived in Haiti together. The summer we waited for Isaac and Hope Britt prayed fervently for them each night. I can picture those sweet times well. The things she was able to do in Haiti are mind-numbingly awesome and that time was precious to us. We're so proud of this child's drive and desire to use her gifts to help others. We're grateful she found in Chris a partner that values relationships and loves her so well. She'll graduate from Baylor in December (at 20) and begin working toward her next goal. We're a giant cheering section ready to walk with her through the wins and losses. (Britt in one word: driven)

In 1994 a beautiful blue eyed girl was born to a 22 year old mom. The mom never even bought a baby book for this precious baby girl. #Fail. I remember the first few weeks of her life very clearly, after that it is a giant fast-moving train that sped by while I was in the ladies room or blinking or something. I remember her raspy little toddler voice that did not disappear until she was almost four. I remember her Kindergarten graduation and her first sporting event. I remember the day she learned to water-ski and ride a bike. Thankfully the last several years are documented and we've taken a bazillion photos all along. She has shown us what it means to be strong and love through pain and overcome obstacles. We have seen in her a sacrificial love for others that challenges us, her parents, to do a better job of giving and serving and loving. She is funny, loving, giving and kind. We love the things this girl is teaching us. (Paige in one word: sacrificial)

In 2002 a handsome brown-eyed boy with a killer smile came home to Minnesota. I bought a light blue scrap book and complied tons of information about his birth-family and the story of how we met and adopted him. The book is the only complete project that exists for any of my children. Some of my children have accused me of playing favorites. I have no explanation for why I saw that project to completion. I also have no idea where that book is today. Our "keepsakes" have been moved enough times that I don't exactly know where any of them are "keeping". Today this eight-year old is easily the most positive and joyful and kind guy in all of Texas. He recently left to go with Grandma and Grandpa for a week and the difference his springy step and sunny outlook make in our day to day lives was realized- and missed. We've learned from Isaac about tossing off the negative opinions of others and living in who God says we are. One day he came home to tell us, "That boy said I was stupid. I told him, I am not stupid -- I am special!" We are thankful that he lives in that truth. (Isaac: joyful)

In 2002 a sickly and petite baby girl with GIANT brown eyes came home to Minnesota. I bought a light pink scrap book and never put things into it. I compiled information and put it in a folder. Somewhere that folder and empty pink book are gathering dust. I remember a lot about our first months with this baby girl and how two kidney surgeries made her a new person with the ability to grow and begin to give and receive love. I remember flying out of Haiti with her with tears of gratitude and relief pouring down my face. The almost eight years since - one solid blur of activity. God showed us in her story what restoration looks like. Yesterday I asked "Are you starving?" I caught myself and said, "Well, I know you're not starving but are you hungry?" The fact is, she was once starving and she knows what it is like to not have what you need. She now has complete trust in the love her family has for her. Even after so much loss and so much neglect in her short little life. That is overcoming. That is healing. That is restoration. (Hope: resilient)

In 2004 a dramatic blue-eyed boy made a dramatic entrance into our lives. Our main memories of his first weeks are of gratitude and realization of how close we'd come to losing him. (drama from the start) I vividly recall the day Isaac and Hope came running to greet the peculiar little wrinkly person for the first time. The entire family adored and babied him from day one. This is apparent today. I recently asked him, "What if someday we adopted a little brother?" He looked me in the eye and with great authority said, "Mom. I *AM* the little brother." There is no doubt that Noah has every intention of holding his claim to the role of "baby of the family" ... never mind the other two princesses that came after him. He talks non-stop. He lives in emotional extremes. When he is mad, he is VERY mad. When he is sad, he is VERY sad. When he is happy, well ... you get the idea. (Noah: intense)

In 2007 things went a little crazy. A beautiful little brown bundle of chubby cheeks came to claim the baby spot in January and six weeks later the news came that her title would be short-lived and even contested later that year. We'd waited on her and not known of her whereabouts for more than two months when Troy miraculously found her one afternoon in January. She was covered in scabies and fungus. Ten weeks at an overcrowded orphanage had done her no favors. We have so enjoyed this quirky child, so different from the others. Phoebe is rarely defiant and is quick to apologize. Phoebe is the last to speak up and the first to make her feelings known just with body language and facial expression. She might be quiet, and of few words, but she is always deep in thought. Her thoughtfulness shows when out of nowhere you hear the voice of Elmo say, " I mwad you Mom." M.W.A.D. spells l-o-v-e. And who knows? Maybe one day she'll be potty trained too. (Phoebe: thoughtful)

Lydia and Phoebe have more documentation of their baby-hood and toddler tales than the others who came before the era when blogs became baby books. It is well documented that Lydia was an average newborn that became a fun one-year old that became a really insanely frustrated and challenging two year old. When a father and mother of six other children suddenly have no idea what to do with a child -- well, it is apparent that the child is a force to be reckoned with. Lydia has a new gigantic vocabulary that seems to be helping her frustration level. She is much like Noah in that her emotions don't have a middle setting ... it is all or nothing. We're not going to see a ton of automatic compliance out of this one. May we be equal to the task. And may she not end up in jail. (Lydia: Strong willed)

This is not a baby book. But it is my attempt to write some things down.
Now, to try to do it again before 2013.

I love you my driven, sacrificing, joyful, resilient, intense, thoughtful, strong-willed babies. You teach me something new every day. 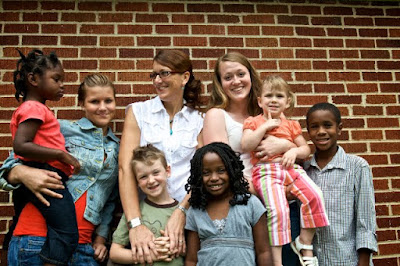