Paige and Troy head "home" (home is everywhere home is nowhere) to PAP tomorrow. Troy was telling me that sometimes he wakes up, and without opening his eyes, tries to remember where he is. It has been a month of non-stop travel.

It seemed like an okay idea to allow only 35 hours between returning from Mpls/StPaul and going to PAP back when we planned the trip for Troy and Paige. Today it seems fairly stupid. We are off to fill bags with things Beth McHoul might need (hams, turkeys, condoms - pretty much your ordinary run-of-the-mill stuff) ;) and then we'll pack and be ready to roll back to the DFW airport early tomorrow morning. OR we won't be ready to roll. Either way - off they will go.

Speaking of the DFW airport - Proud much? Wow. We're fairly certain there is no airport so proud of itself as DFW. On the way in the billboard brags that DFW is larger than Manhattan. When you get on the shuttle you watch a promotional video about how totally amazing and superior the airport is. Advertising your airport to someone who is already in it seemed kind of funny to us, but what do we know about marketing? I guess if every flight we needed of late was not departing out of DFW - maybe knowing how awesome and ginormous it is would make us want to find a way to fly out of there even if it did not match our itinerary well? "Just find a way to route us through that awesome huge airport DFW" we'd say. Texas is not afraid to be proud. And neither are its airports. :)

While we were in MN Paige and her best friend since the second grade were in charge here in Waco. Britt was on back-up patrol and did a little relief work. Last night the girls expressed how utterly exhausting they find parenting to be. It made us laugh to hear that they planned to sleep a lot of today - they are beat from the early morning wake-up calls from Lydia and all the demands they had to juggle as parents of five. Paige was giddy every time we talked to her. She so loved having her good friend from MN here with her. One phone call she proudly announced that she had caught vomit in her hands, thus avoiding carpet clean-up. Obviously she has been trained by the very best. ;) While we were gone Lydia learned two phrases - "Stop it bothering me" and "I had it first" - two super useful phrases for Phoebe to ignore when they are being screamed at her.

Our trip to MN was so good and so exhausting. There is something to be said for staying long enough to actually sit down -- but we only had four nights and five days so we stayed on the move trying to see as many friends and family as we could.

Troy had a BLAST pretending to be a rock-star and getting to play one set with 'NDY'. 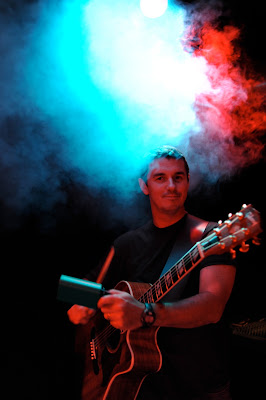 He went in feeling like the youngster in the group, but now he is a legit member - just like the rest of the band he is simply, 'Not Dead Yet' - they were so good and it was SO fun to listen to them. There are more fun photos that we'll try to post eventually, we have not had time to look at all the pics Marcia took. Thank you to the Ericksons, the Boyds, the Ross Family, and the Churchills for inviting Troy to join in on your fun. We love you guys.  (YouTube Video of U2 song from very end of night here.)

We spoke four times at a large E.Free church. Three of them went really super well. The other one -- worst.ever.of.all.time. We were running on about four to five hours of sleep and there was a vortex of situations that caused me to be nervous and weepy and Troy to be distracted and it was just so very bad. I am not even sure what I said, and the audience probably wondered too because my voice was so shaky and weepy. We were wishing for a do-over on that Saturday night service. Sunday went much better and we felt more like ourselves and got to speak a little longer. We condensed 35 minutes into 5 to 8 minutes and went for it. Public speaking is so stinking nerve-wracking ... I am amazed by people that do it without any tummy trouble. Thank you to Constance Free Church for the invitation to share. Thank you to the family that we met after the 9am service - from Hudson, WI. You guys don't know how encouraging your words were to us - and the timing of them - thank you.

Isaac is waiting on me with pen and paper to help make our plan for the day - I better go.

We thank you for checking in and we ask for prayers as we split up again tomorrow.