(Written by Troy)
Tonight things almost got ugly at the Livesay House. Actually, we did experience some full-on ugly for a short period. Fortunately, things have calmed down now and all the little ones are tucked into their beds - including Isaac and his beautiful new nearly bald shaved head.

Let me back up - this afternoon Tara reminded me that Isaac has been in desperate need of a haircut for a while now. I think subconsciously I had been avoiding the topic because of an acute awareness that the cutting of the hair on said head always seems to be a stressful experience.

Each time Isaac is due for a haircut, there is mounting pressure and increased awareness that:


We have a lot of things happening over the next few days, some of which include visits to the kids' school and many moments where I can almost hear people saying - “What are those white people doing with those brown kids?” Knowing how important one’s personal appearance can be in such situations, I reluctantly agreed to take Isaac out to get the job done.

I hesitated for a while - then Oprah was on the television and I was happy to have any excuse to get out of the house.

I set out with my two sons in tow and resolved to make this a positive experience. I have had a few failures in the past regarding the realm of Isaac’s coiffure, and really wanted this time to be different...

I began having visions of a powerful bonding experience with the boys - hanging out in the barbershop - crossing differing beliefs and boundaries with ease - laughing at stereotypes - teaching my sons  and others important lessons about our shared brotherhood with all peoples - scoffing at cultural mores........
What I was really picturing was me, Noah, and Isaac kicking it with some dudes like Ice Cube and Cedric the Entertainer a la ‘Barbershop’ the movie.  I wanted it to be a really great afternoon.

In case you don’t want to read about the rest of this train-wreck I will cut to the chase right now: I failed on all fronts.

We regularly pass a real old-school barber shop down the street - it’s got a real barber pole and looks totally legit. I have fantasized about my cross-cultural experiences in there many times and knew it was the place to take Isaac for this round of beautifying. The sign by the road boasts “OPEN SIX DAYS A WEEK”, but Tuesday is apparently not one of them...even though the sign in the window was flipped to “Open” and the plaque on the door proved we were there during regular business hours.

Next best idea - stop in and see J.B. - the beautiful, patient, amazing, sweet, talented woman that has helped us with Hope and Phoebe’s hair during our time in Waco. I needed her advice. (Part of the reason I was so looking forward to rocking it Barbershop-the-movie-style was because of my positive experiences sitting around for hours in her salon as the only white boy in a female beauty salon that specializes in braids - I know you’re jealous.) J.B. recommended a place called “Nappy Roots” and gave me a loose idea of its whereabouts. Sounds perfect, right?

Too bad I couldn’t find it. 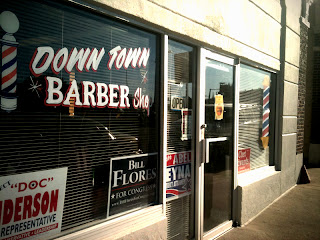 I cruised through town for a while in search of barber poles and life-changing experiences. I found ‘The Jockey Club’ - sitting empty and locked up during normal business hours. I considered the Baylor University Barber Shop but something told me that wasn’t going to be quite what I was looking for. Next up were the ‘Star’ and ‘Solutions’ Shops - one closed...and one I could not locate. I got on the phone and talked to Britt who was driving home in another part of town - I briefly explained my predicament and she did a drive-by check on a real dive of a place called ‘Cuttin’ Up’ or something similar....closed. Britt reminded me that I had technology in my hand that could help me search for what I needed. I had been searching for a while and finding the right place was important.

I used some fancy phone app that tells you what businesses are near you - search terms - “MEN’S BARBER” - response - did you mean BARBERS - clicked - YES - saw - TITO’S DOWNTOWN BARBERSHOP - got excited - drove to Tito’s - expected great things.

Seriously - Tito’s Downtown Barbershop? How perfect does that sound?

Here’s where the bad decisions really start. I walked in and had a bad feeling. This was not the experience I had desired.... I was looking for urban and instead I got Old West, like cacti and tumbleweeds. I knew I was risking it because Tara had specifically stated that no one even remotely whiteish was allowed to touch Isaac's head. I was trying to turn around and leave but then got pressured by the two desperate barbers in the empty shop to “get a haircut man - no problem - we can do it”.

I explained to ‘Tito’ that the handsome young man with me was in need of a nice haircut and politely asked if he was familiar with cutting the particular type of hair that he has. Then I asked a couple more times more loudly and with less words - as Tito does not hear too well these days. Later, I learned that he apparently does not see all that well either.

He was very convincing and reassuring. Noah was very distracting. I really wanted this to work out. Oprah was also on the television in the men's barber shop and that really troubled me. These are my excuses. 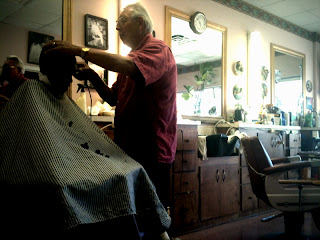 I had to leave and get cash around the corner because Tito’s establishment is in every way exactly the same as it was fifty years ago. The chairs. The smell. The decorations. The brooms. The combs. The straight-edge razors. The liquid antiseptic. The warm shaving cream. The cash register. The no credit/debit/any sort of plastic card machine. Normally, I would have really enjoyed that. As I walked out I noticed some of the wall decorations indicated that Tito was probably Native American. I naively trusted that he had a better shot at handling Isaac’s hair than the blonde lady up at Supercuts. Boy was I wrong.

When I returned from the cash machine I found Isaac standing in the dusty waiting area - Tito’s attention now turned to the next victim in his chair - and the sight of quite possibly the worst haircut I have ever seen in my life on my son’s head.

To sum it up briefly - there were clumpy and chunky parts on top ‘faded’ down into swirls on the sides and a large C-shaped swoop carved into the back of his head. It looked like someone threw a weedeater at his head while I was gone.

I was horrified. I felt really bad for Isaac for enduring the pain and stress of it so tried to maintain a brave and complimentary face. I stammered a kind of a questioning ‘you’re done?’ to Tito even though it was clear he had started on the next guy already. Tito, of course did not hear me. I was at a total loss and after watching him work over the buttons on the cash register fumbling to see each one - I decided that any attempt he made to fix this disaster would most likely just make it worse.

I knew one thing at this point: I could not go home.

I discussed the situation with Isaac - he wanted me to fix it at home. There was NO WAY I was going home with him looking like that. Noah, on the other hand, thought it looked awesome and wanted ‘designs’ on his head, too.

Noah is not generally helpful in any sort of stressful situation of any kind. Consider yourself warned.

I really wish now that I had taken a picture to document this monstrosity but I was far too stressed out to consider that at the time. I wanted no proof whatsoever of what had just occurred.

I recalled seeing a salon inside of the Waco Wal-Mart store that was staffed by women that looked like they knew what to do with pretty much anything - and decided to see if they could save me. (And Isaac.)

We walked in, the lovely young brown woman at the register did her best not to shake her head at me as I explained our predicament. She did crack a smile, however, and I was encouraged that we had found our solution. There was some consultation among her colleagues and looks over shoulders at us...then she sent us back to the chair of a slightly less lovely and less young woman that could not have been more disapproving of the whole affair. She did not like my jokes. She did not sympathize with me on any level. I thought she might kill me before this was through. (Ok, it wasn’t that bad but I was definitely scared of her.) Over the next fifteen minutes, she managed to salvage the disaster and turn it into a very nice closely-shorn well trimmed head and my handsome son looked beautiful again.

Once she had finished saving my life and was taking my money (for the second haircut on the same head that I had paid for on the same day) - she lightened up and really enjoyed making me tell her again how exactly I had managed to get his hair so messed up in the first place. 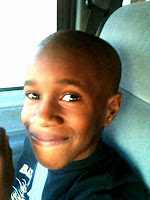 Smartsyle Salon in Wal-Mart - a million

Thank you Smartstyle ladies - without you I could very well have ended up sleeping outside tonight...because I could NOT have gone home to let Tara see what I had done to her son.
Lesson learned - no one. NO. ONE. EVER. Who is not brown... Will ever. Ever. Touch my boy’s head again.

I should have listened to Tara in the first place. I had to add this or else I know she would tack it on at the end anyway. ;) 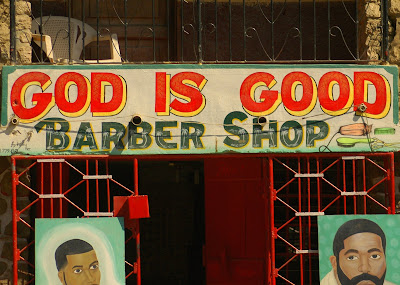 The next barbershop experience will happen in Haiti and I fully expect to fulfill my dreams of hanging with dudes just like Cedric and Ice Cube - but we’ll be speaking Kreyol and pulling electricity off of car batteries for the shavers and it will be awesome. I can’t wait.
at Tuesday, October 26, 2010