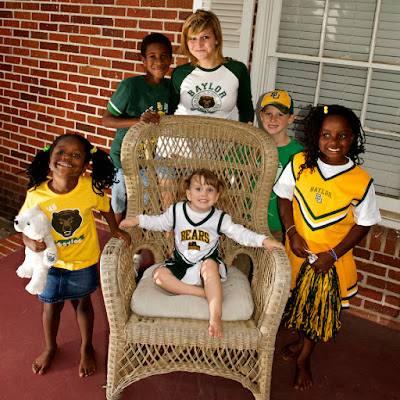 We went with the whole crew to campus tonight to celebrate with Britt and Chris and the Baylor Bears as they prepare for Homecoming tomorrow.  They had a giant (and sometimes scary with wind gusts) bonfire and pep rally with rides and entertainment.  Saturday there is a parade in the morning.  The football team is going to have to get it done without our support because we cannot stomach the $230 it would cost to bring these lards to the game. Plus, this tribe would have a twelve minute attention span for the game and I would be furious about the money spent on twelve minutes of entertainment.  As a result everyone would say how crabby Mom is and the day would be ruined.  Staying home seems so much easier on our relationships.

Lydia thought it was very odd to be going out of the house during the night. We basically pull this kid thing off only because of our strict adherence to a 7:30 bedtime. That right there is the secret to our sanity ...  (and I am giving you the secret free of charge) So tonight when we left the driveway at 7:45 she was a bit bewildered. Her comment as we drove, "It is weally dawk out here. Scary cockroach."  When we asked her what that meant she just said, "Scary cockroach, I don't like it. I cover my ears."

Phoebe refused to meet the big mascot bear, she hates that part of American culture as proven by a melt down over the Easter bunny last spring. She's no dummy. Why trust giant stuffed animals when you have no previous experience telling you that is a safe move? Both girls were tired eighteen minutes after we got there. Good times.


We laughed at how we often find cultural practices in Haiti to be "different" (not necessarily different better) and then realized that a few thousand people dressed in green and yellow were gathered around to watch a giant pile of wood pallets burning and putting their hands in the air in the shape of a bear claw while yelling "sic em" in unison.  Who is weird now? 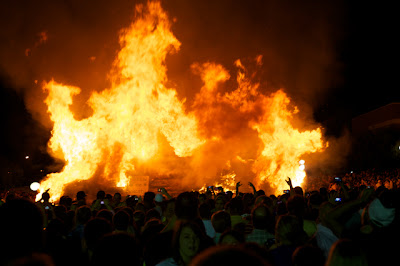 While our physical selves were standing on one the most beautiful and manicured campuses in Texas, our heads and hearts are with our friends and families in Haiti. Not to be Debbie Downer (okay, that is a lie - I am going to be Debbie Downer) but it is pretty uncomfortable to stand on that immaculate campus and realize that not very far away people are dying for lack of clean water.  The day brought a confusing combination of prayers, tears, frustration and  feelings of helplessness. We asked a Haitian friend to be sure and talk to Hope/Phoebe and Isaac's moms (Isaac immediately expressed concern for them when he heard) and we basically begged Geronne to leave the village and go hide out at our house.

We don't know that anything except fervent prayer makes sense from Texas ...

God, we need a miracle to stop the spread of this contagious disease/bacteria. Be with all those working to help the sick, increase their energy and give them endurance and protection from illness. Please Lord, spare the beautiful souls in Haiti from more pain and loss and misery. Lift them out of this darkness. Amen.
at Saturday, October 23, 2010