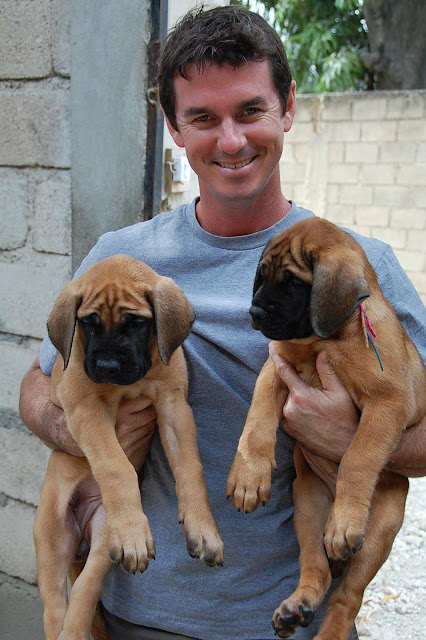 Today we took possession of the beasts, Hazelnut and Artemis.

That is correct. TWO giant (8 week old) puppies have come to live in/on our all cement "yard" with our already full grown Mastiff, Peanut.

We've never once been accused of being super intelligent.

Artemis is the name the Hendrick Crew chose for their puppy. We are taking care of her until they get back to Haiti sometime in August. They named their dog after a Greek goddess and we named ours after a nut.  We know that says something. We are not quite sure what.

The lectures on immediate poop pick-up and removal have been presented in various creative forms to our three middle children. They are the ones that begged and begged for a second dog. Their begging earned them the right to the dog along with exclusive rights to dung removal. The lecture was received - - well, they stood and allowed it to enter their heads via their ears anyway, but at this point it's just a matter of how many hours/days/weeks the lecture sticks.

I have some numbers in my head for each of the three musketeers. I know which kid is a motivated puppy owner and which one is only in it for the immediate gratification ... only until the novelty wears off.  Should we bet? What's the over-under? Anybody wanna go double or nothing? Who will cover the spread? Are those gambling terms even applicable here? No idea. Do we take bets? Yes. We do.  Who's your money on?
at Tuesday, July 05, 2011