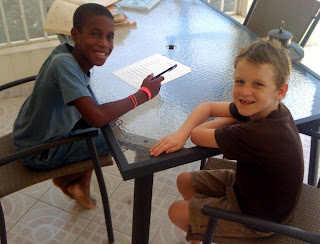 Paige is off on a new translating assignment today.

She's helping to take a survey and gather data with some of their summer interns.  It is a pretty fun assignment because we know the Pastor of that community and used to live near there and work with him in 2006 and '07.  Brittany once stitched up his foot after a moto accident.

Isaac and Noah and Hope are all working on  filling out some questions their teachers sent them in order to get to know them a bit.

I am enjoying the conversation and snickering from nearby.  Right now Isaac is interviewing and filling out Noah's sheet for him.

Isaac - "Well. Let's see.  I think I'd say you have a bad temper but I can call it an average temper if it makes you less mad."

Ha.  Who needs entertainment when you can eavesdrop on these little fools?

Here are a couple of Isaac's answers: 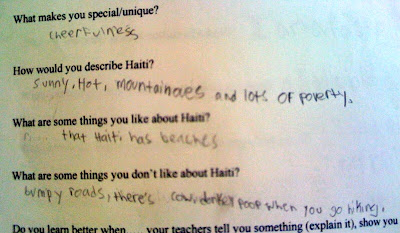 Cow and donkey poop is a huge problem here.  (?)  Isaac described himself as: cheerful, smart, and energetic. He listed EVERY subject in school in response to the "what are you really good at in school?" question. He personally enjoys the activity of "exploring".  He would also like to "learn more about experiments."

Here are a few of Hope's answers:

I love Hope's description of Haiti.  In that order.  Beautiful. Hot. Trashy. Windy. Noisy.  Agreeing with her; tents and earthquakes are not likable.  Hope noted that she is a fast runner, that she has trouble getting along with her brothers when it comes time to choose a game together, and described herself as "happy, smart, funny."

Both Isaac and Hope list pizza as their favorite food.

Noah -
He described himself as "affectionate, nice, curious" and when asked what he personally enjoys he said all of this: "swimming, writing, climbing trees, swinging on ropes and vines, talking a lot, playing on rock-walls, being silly, fake crying, diving off high objects, and water balloon fights."

(That fake crying thing has got to go. Doctor Jen - please come back.  right away. I had no idea he likes diving off of high objects.)

He described Haiti like this: "Hot. The ocean is cold. Lots of filthy birds."

That one has me laughing. The filthy birds all seem to live next door.

Noah dislikes that there is trash and pollution and electricity that goes out in Haiti. He loves that he has mango trees in his yard and can swim every day all year and that he has a fan on his head when he sleeps.  He lists his favorite food as: pears.