Julia and Paige said their teary goodbyes on Saturday.  It was a sad moment to observe.

It was so fun having her here with us. She was a quick study and learned much faster than most all about how to keep the electricity nazi happy.

She wrote to us after getting back to MN and said that she can no longer stand with her refrigerator door open without thinking of Troy's rules.

Troy spends large portions of his time at home managing electricity. He has made it his personal mission in life to be sure that no one is careless with the supply.

When the city electricity is out you best not be opening the freezer for ice more than once a night, using an extra light, charging any phones, walking away from your fan without turning it off ... unless of course you enjoy getting reprimanded.  I have noticed that he is much more strict in enforcing the rules for Paige, Dr. Jen, and guests.  Somehow I have been offered a more lenient set of regulations. I guess it pays to sleep with the electricity nazi.

If you wish to see a predictable yet entertaining display of utter disgust, just turn something on that has a heating element at a time that the house is being powered by batteries only.  Heating elements are the arch-enemy of battery supply - EVERYBODY knows that!!!

Even though he has confirmed hearing loss, every once in a while he'll perform an amazing feat of hearing genius. Troy sits catching up with emails in an office area at the top of the steps many evenings.  Most often there are multiple background noises ranging from fans, kids, roosters, video games, etc.  If Isaac were to pop a piece of bread into the toaster downstairs in the kitchen and push down the handle, it wouldn't be at all unusual for Troy to bellow from the upstairs office area, "Did someone just use the toaster?"

Paige is the most skilled at stressing the e.nazi out; he wonders aloud if her stunts aren't meant to push him over the edge. Hair straighteners, lamps, curling irons, decorative lights, hairdryers, ipod docking station, and the list goes on...  Suffice it to say, our batteries lasted much longer while she was in the USA last month. 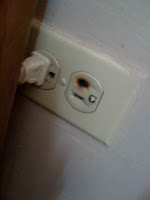 Troy has recently been working with an electricity nazi child prodigy. The power that comes into the house from the city (EDH) is totally wonky. It spikes (see photo) and drops and throughout the day things blip. When this happens Lydia's proclamation "EDH is OUT!!" can be heard throughout the house.  She's not about to waste battery powered electricity, heavens no! She's been trained by the best.

Today when it blipped she started unplugging things in a fury of conservation concern. When I kind of ignored her announcement and said "Okay Lydie" she said, "NO, say - Thank you for telling me Lydia."

Our fearless e. nazi is driven by love. He wants us to have battery powered electricity all throughout the hot, muggy, buggy nights. Knowing that love and concern for us are his only motivators - we may snicker at his neurosis - but we're all secretly thanking him when our fans are still spinning at 3am.
at Monday, July 11, 2011