One woman doesn't understand the consequence of her choices.
One woman seizes an opportunity and employs all she's learned.

Over and over Haiti has been described as a land of contrast. So much so that it has become cliche, even a bit worn out.  Beauty and pain intermingled. The thing is: those contrasts are so real, so obvious, so bright that if you don't look away they'll blind you.

After a long thirty-six hours, we're simmering in a pot of fatigue and confusion. The temptation is always to try to figure it all out, to make sense of every interaction and every choice, expecting there always to be clear evidence of cause and effect. We mistakenly presuppose that it should  be easily understood and filed away neatly at the end of the day.

That's not how it plays out.  We end the day the way we started our day; pleading for understanding and strength, grace and mercy  ... "Papa nou bezwen ou - Father we need you."

Today we witnessed the anguish of:

1. Clotilde - who was transported with dangerous preeclampsia earlier than it is typically seen. Today, when picked up from the hospital run by an international organization she shared that she saw her baby on a sonogram alive. She was told it was about the size of a 24+ week old baby. She was informed that she'd have to deliver in order to reduce her dangerous blood pressure. She was induced and delivered a little girl. She never held her daughter. She was counseled afterward. She was told by the hospital psychologist that all things happen for a reason and maybe this was for the best.  She has resolved to see it that way.  "Maybe it is for the best, there was a lot of tension in my family and I was stressed." We dropped her off at home this afternoon.

2. Beatrice -  Delivered a 4 pound 8 ounce baby girl at another area hospital run by a Catholic organization. We rushed her there with lights and sirens Monday believing that she was delivering a full ten weeks prematurely. We learned through information leaked to Agathe that Beatrice lied to us about her dates. She was always tiny - due to her meager income and lack of resources - but she was told by friends that if she said she was further along in her pregnancy we wouldn't take her into our program. Because of her dishonesty we believed her to be premature; we risked her out. One of the most desired and unique benefits of our program is the loving, safe, private room birth that is offered. She delivered with dozens of strangers in the room. Dr. Jen and Melissa had set a protocol for us, they knew that Beatrice had a history of losing babies.  We knew to give Beatrice penicillin while she was in labor to increase the chances of her fourth baby living. Her first three babies all died shortly after birth.  Because of the lie - the baby didn't get the benefit of penicillin. The hospital doesn't have time to know all of that history. The hospital had no idea. When invited, Beatrice said she didn't want to stay a few days to allow her daughter to be closely monitored. She preferred to go home. Her home is a tent.

Today we witnessed the exhilaration of:

1. Vitana - Her twin boys now being called Jean and Jeany :) went back to the hospital where they were born for a scheduled appointment. The Doctor proclaimed "What are you doing?! These boys look great!"  Vitana is courageously facing each overwhelming day of breastfeeding and her boys are getting bigger and stronger by the day.  She and her sister-in-law are heard singing and laughing together in the postpartum area. Together they are fighting hard for these little boys. 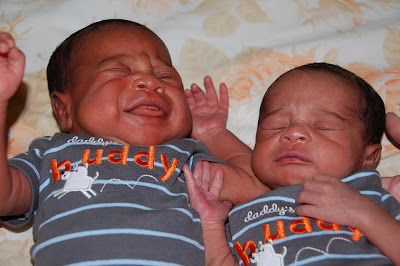 2. Chrislene - Just barely 20 years old, and only seven weeks in the program, Chrislene grabbed on to the opportunity to learn about labor, delivery, and nursing her baby.  Even though she was very afraid in the beginning, she believed what she was taught. She listened when Beth brought out her stern granny midwife alter-ego. She complied with requests, she patiently trusted her body and beautifully welcomed her daughter into the world while her Mother stood nearby singing "mesi Jezi mesi Senye".