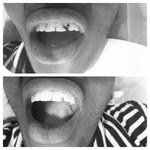 You may recall a month or two back I wrote that Troy was doing something new and exciting in Haiti and that he'd be sharing about that.

Troy has had an interest in dentistry for a long time. He used to work in a dental office with his Mom on occasion.

When he was 18 he had that thing that many of us have when we are young; you know the thing. Six or eight years sounds like forever and you cannot possibly imagine taking on something that will take longer than nine or ten minutes. He made the choice to drink beer and have fun instead of pursing dentistry. The drinking establishments of the Twin Cities salute him.

Fast forward 19 years. Last June (2012) a dental team from Boston came to Heartline. When they left Troy said he knew it sounded crazy but he couldn't stop thinking about how much he enjoyed being a small part of their work and wondered if it was too late to try to explore some type of dentistry training.  Troy started researching and reaching out and asking questions.

Last November Troy was trained in atraumatic restorative treatment (ART) by a dentist that came to Haiti specifically by Troy's request to train him. The guy was a huge encouragement to Troy and because he'd worked so many years in Senegal and had trained hundreds of people in the techniques of ART and had also begun dentistry training at age 37, the two of them very much hit it off.

When that training was complete I asked Troy if he'd explain the why and when and how and all the ins and outs of the whole thing in a blog post.  Troy gave me an unconvincing "Yeah, sure, I'll do that for you my wonderful wife that never nags me" response.

Soooo. I saw on the calendar this morning that it is now March. I am finally giving up on waiting and I will make a feeble and mainly uneducated attempt at explaining the situation.

"The atraumatic restorative treatment (ART) approach was born 25 years ago in Tanzania. It has evolved into an essential caries management concept for improving quality and access to oral care globally." (This technique requires zero electricity or fancy technology and works just as well in a shiny dental office in Dallas, TX as it does in the interior mountains of Haiti or Tanzania.)

For those with a desire for details and reading words that don't mean things to everyone:
New article - supporting evidence about ART
World Health Organization PDF about ART
Comprehensive 25 year anniversary overview of ART

Troy learned this treatment with the goal of doing this one safe and straight forward thing to help save teeth. He learned it as the tangible and useful thing he can safely do in the dentistry arena while he slowly begins to determine how to pursue more advanced training.

The average Haitian (which is possibly a rude generalization -please forgive it) does not have a disposable income to speak of, therefore going to a dentist is quite honestly a privilege of the upper-middle and upper class. Most people here are working, bartering, trading, and borrowing money for much more basic needs. A trip to the dentist would fall quite far down the list.

Oftentimes women in the prenatal program will have toothaches for weeks and months without getting help because the cost of seeing a dentist is prohibitive. They live with pain in ways we still cannot easily comprehend. Because money is tight for most folks, teeth are neglected for a long time and rather than saving the tooth by filling a cavity, it is common for teeth to become so decayed they need to be pulled instead.

As the man's wife, I can tell you that it has been a joy to see him so excited and happy. Having added this into his weekly routine and having something far more tangible than what he is usually toiling at has been so good for Troy.  In the last several years I was generally enjoying my day to day life and work more than Troy. He was feeling frustrated at a lack of measurable productivity. That is not to say there was not productivity, that is just to say Troy couldn't figure out how to measure it.

We're not alike in every way but we are similar in this way: we both prefer to be able to measure our work at the end of a day.  We struggle with frustration when things are ambiguous and intangible.  In many ways the unpredictability (read: zero cooperation) of Haiti has forced us to grow in this area, but even so we're both likely to take things in in a literal and concrete fashion and we generally approach things with a clear idea of "how things should be" -- that is super nice and all ... right up until our perceived "should be" is not at all how things are. Then we're frustrated.

Troy is starting with women in the Heartline programs, (sewing, jewlry, prenatal, early childhood development, cooking, literacy) there are enough cavities to keep him busy into the distant future before opening it up to others. For Troy this is one area where he can set a goal, work toward the goal, achieve a goal.  (See a bad tooth, work at fixing said tooth, end up with a finished product of a much improved tooth.)

It is the very beginning of what he hopes will become a long career of fixing mouths.

In January Troy's mom, her boss, and her entire dental office were in Haiti and they invited Troy to join them. This week another dentist from Minnesota invited Troy to go to the north part of the island to work with him. Knowing Troy is getting a chance to learn and observe and do something he loves is making his cheering section at home in Port au Prince very happy.

About the title: ouvri bouch ou means open your mouth
Photos: teeth repaired by troy with ART
at Tuesday, March 05, 2013