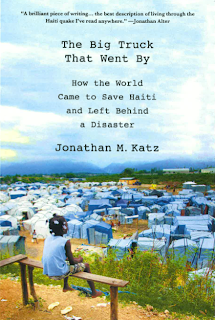 Reading Jonathan Katz's thoughts on the complicated political history of Haiti and his personal experiences here before, during, and after the earthquake was very interesting to me. Katz was the Associated Press journalist living in Haiti when the earthquake struck.

Two short excerpts:
"They were words you can truly understand only when you realize that to love Haiti is to come away bruised; that loving Haiti is to love something that may not even love itself, but that it's still love, after all."

"Haiti had given, and it had taken, and I suppose I gave and took too. A little over a year before, the Earth had almost taken it all. I was leaving behind friends and the memories of friends, far too many of whom had gone from the world. The island, in good times and bad, is not a place to which you adapt. It rewires you. To cope and not be torched by its energy, you have to change the way you think and feel and see the things around you. Even the illogic has a rhythm to get used to. But there's a limit to understanding. I had thought I'd known Haiti before the quake struck; I had thought I'd learned post quake Haiti when the epidemic hit; I had thought I could predict the direction of things when the election went sour. I had no idea. Haiti, like life, does not care what you want from it."


I had involuntary tears in a few places in the book when I so deeply understood his struggles in the time following the quake. More than once I read out loud to Troy and Paige and their "Uh-huh, yes" responses confirmed that Katz was communicating things we all think and feel.

If you love this country and have an interest in its history or in understanding how millions of aid dollars can be given while nothing visibly changes, I believe Katz gives a fair assessment in his book, The Big Truck That Went By.

Beth thought I would like Madame Dread, I decided to read it on her recommendation.  This book also covers some of the volatile political history of Haiti, making it a both interesting and educational.  I enjoyed reading a memoir written by an American that came here for one reason, then fell in love with Haiti and eventually married a Haitian man. Kathie Klarreich honestly addressed some of the challenges of an interracial and intercultural marriage. Because there is a solid chance a bunch of little Livesays will end up in interracial and intercultural marriages I am interested in better understanding those unique dynamics. Klarreich's respect for Haiti is evident. She beautifully expresses the conundrum of loving a place that perpetually  leaves you uncertain and off balance.

Troy is back from his time in Limbe. He had a great week working out there and came home lamenting how "di" (hard) the city is compared to the outlying areas. There is Port au Prince, and there is the other Haiti. - Or maybe it is: There is Haiti and there is Port au Prince.
Whichever way, we love (and other things too) this place that leaves us perpetually uncertain and off balance.