Kristen and Mark are parents to four beautiful children. Two of the four kids joined their family through adoption. They most recently adopted from Haiti and that is how we met and became friends. Kristen wrote this post about what she wished she could have had time to say on a June appearance on "The View".  To read the post and comments at her site you can go here. Kristen has graciously granted me permission to post it in its entirety here. 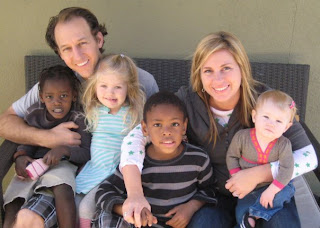 Well, folks, my fifteen minutes on The View is up. Despite a slightly mortifying gaffe, I was glad to share a bit of our adoption story on a national media outlet.  Leading up to the show, my mind was racing with points I wanted to make about adoption.  It's something I'm so passionate about, and it's hard not to replay what I wish I would have said.  Here's a bit of it . . .

I wanted to talk about the literature on institutionalized children, and how passionately I feel that the love of a family is a BASIC HUMAN RIGHT.

I wanted to talk about the effects of institutionalization I am seeing in my own home.  Even though my son is only three, and even though he was in an amazing orphange.

I wanted to talk about how deep my love is for my adopted children.  I wanted to share the way I love them every bit as much as the daughters I have birthed.

I wanted to talk about how you can only "save" a child once.  After that, it's called parenting, and it is hard work.  I wanted to emphasis that while I think adoption is a piece in solving the orphan crisis, it should not be a considered a rescue effort at the familial level.  And furthermore, adopted children have the same right to be ungrateful and bitter towards their parents as biological children.

I wanted to say that while some internationally adopted children may choose to return to their birth country to give back in some meaningful way, some may choose to work at a local Starbucks or spend their 20's figuring out their career, and that's okay.  I wanted to challenge the notion that adopted children somehow need to "make good" or redeem themselves by being special, as that narrative is often pushed in entertainment.

I wanted to talk about how, when we called our Christian agency about a healthy African American boy from LA county who was in need of a home, we were told that they had no prospective adoptive parents willing to accept a placement of a black child.  NOT ONE.

I wanted to talk about race preference in adoption, and the fact that a minority status qualifies a child for "special needs" status in the US, regardless of age.

I wanted to talk about how much I have learned from reading the writings of adult adoptees, and how their experiences of loss and isolation inform me as a parent, and also break my heart.

I wanted to talk about aspects of Jafta's case that I just can't share because I want to protect his privacy, but that would make your head spin in anger at the mismanagement of children in the system.  I wanted to share what it was like to spend three years wondering if my child, my first son, would be returned to someone who had proved, time and again, that she should not be trusted with children.  I wanted to talk about the ways DCFS lied to us, and the discoveries we made along the way, and the need for reform and funding for our fostercare system.


I wanted to talk about the 18-year-olds I regularly see on adoption photolistings.  Kids like Percell who, despite being old enough to live independently, place themselves on national photolistings because they desperately want to be adopted.  Because, in Percell's words, he "wants to become a member of a permanent family".  I wanted to talk about what life must be like for Percell, and other kids like him, who age out of the fostercare system despite a deep desire to have a family even as they enter adulthood.

I also wanted to talk about the reality that, in third world countries, most orphanage conditions are deplorable.

I wanted to talk about what responsibility we have to caring for our world's orphaned and abandoned children, and the small part adoption can play in that effort.  I wanted to talk about how much we should all be bothered by the numbers of children in our world who are missing out on basic human needs.  Security.  Love.  Affection.