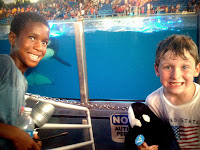 Try as I might I cannot remember how the topic came up. I think it may have been a discussion about baby whales.

We were walking across the unending parking expanse at Sea World San Antonio last week at the end of a very, very, fun day with the middle three kids. Troy was carrying a tired and slightly whiny Noah.  I was walking arm in arm with Isaac. Hope was very close at my other side.


Making babies was suddenly our topic.  Isaac acted like an authority on the subject. I said, "How do you know where babies come from Isaac?"  Troy rather conveniently found new energy and picked up his pace - leaving me in his dust with Isaac and Hope. 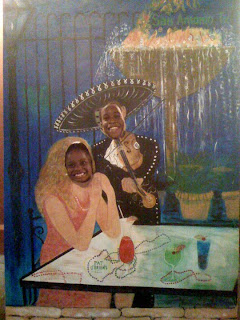 I asked what it means to "sex".  Isaac very matter-of-factly informed me that:

1. A  man 'joins' a woman - you get a baby boy.
2. A woman 'joins' a man - you get a baby girl.
3. Obviously because I have boys and girls by birth both things have occurred in my life.
4. He knows these things from a book he found and read in our Baptist missionary housing house (what tha?)
5. According to Isaac, 'joining' can be like shoulder to shoulder, or kissing, or any sort of joining ... it matters not as long as the people are grown-ups.

When I said,  "So wait. Dad and I just kissed and pretty much joined shoulder to shoulder all day. Are we going to have a baby?"   Exasperated, he said, "Well not today!!! It takes a long time. But that is how God made it!"

After listening to all of this Hope said, "Mom.  We don't know this for sure. We are just taking pretty good guesses at it."

When we got home from San Antonio they produced 'The Body Book' and sure enough, the word "join" is used.  They overlooked all the scientific drawings and explanations and the majority of the facts presented and then took some creative license with the section on X and Y chromosomes and - voila - they came up with their fabulous baby-making theory. 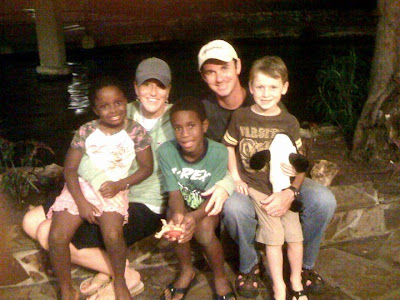 Our 36 hour trip with just the middle three kids was such a blast. It was so fun to focus on them without any diapers or baby-fights.  We had dinner at 10pm and they thought they had officially become grown-ups to be doing an insane thing like ordering enchiladas at such a late hour and walking through the streets of downtown San Antonio. Isaac declared that "no babies" are allowed on any sort of fun trip ever again.  Noah chimed in,  "yeah, you have to be five years old or you are not invited."  Troy and I think they are onto something.


For so many reasons, I don't think we will ever forget summer 2010.