When we spoke in a little town called Lovelady in East Texas on Sunday Isaac leaned over and asked if he could come up and say a few words.  I said, "sure." After we showed the opening video he said, "Mwen se ayiti tou. Bonjou. That means I am Haiti too, good-morning. Thank you for inviting us Loveladians, I am glad to be here and I have never been to East Texas."  Then he sat down.  We've had a lot of great opportunities to share, but Isaac is not usually sitting and listening to us.  I got a kick out of watching his face as we told the story.  During the part where Troy talks about wanting a son and looking at different countries and adoption, Isaac's ginormous smile grows so large it appears it will take over his entire face. On the way home I asked Isaac to paraphrase what we'd shared in those 30 minutes.  Oh.my.gosh, his version is awesome.  He breaks 30 minutes of a detailed story into about four things that make no sense when strung together.  He mixes up facts and numbers and comes up with this:
"We met about 20 years ago." (We said we met when we were in our 20's) "We were on a run." (We said we were running from God at that time.) "We had to climb many mountains to find Isaac." (There were many mountains/obstacles standing in the way of moving to Haiti. But that was long after we'd adopted Isaac.) "But we climbed them and now we have our wonderful son." (Never said anything like that. Although he is wonderful.) "There were 14 things. And now we live in Haiti. That is the end." (Referencing a list we made of 14 reasons we could not move to Haiti.)
I told him maybe we'd just have him share for us in the future. :) 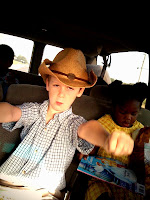 Brittany gave Noah a cowboy hat.  Noah has a cowboy persona that is both entertaining and stereotypical.  The entire way to Lovelady he said cowboy things in a super-silly southern drawl.  He apparently thinks cowboys say things like: "I am gonna catch me some cows."  "See that horse there? I am gonna lasso me that there horse." This is his cowboy face  >>>>

Hope-
We brought Hope up to Dallas last week to a Pediatric Endocrinologist. She had thyroid problems as a baby and a few things made us think we needed to re-check that situation.  At the end of the appointment the doctor sent us to the lab.  Hope has made a hobby out of making her brothers look like scaredy-cats, and the blood-draw was yet another opportunity. She sat stone faced and unflinching waiting for the needle to go in.  Once it was in her arm she said, "It does not hurt. At all."


Phoebe and Lydia-
Conversation from a day ago -
Lydia and Phoebe are playing mommies and babies together all through the house ... they are walking around with a stroller together.   Phoebe kind of bumps herself on a door way ....

They compete in every way at every moment of every day, even when they are just having fun and playing. Sibling rivalry is not really very cute.


Paige-
Came back to Tejas from a 11 day trip back to Haiti and her own bed, describing it as "epic" and then went straight to a youth summer camp with kids from the church our son-in-law works with as a youth pastor. She described the camp week as "amazing and life changing".  Paige is having a great summer.  She has a big test to take again tomorrow. After the test she is jetting off to spend a few days with the McHouls daughter Morgan in Florida. They have plans to annoy and alienate everyone by speaking only Kreyol while they are together. 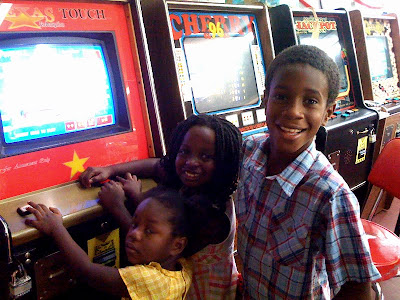 Photo taken before church on Sunday morning at a bathroom stop.  Caption?