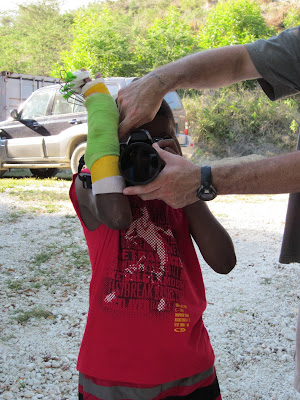 Rosemond and his grandma came to Heartline Hospital on January 25st. He's told me many times that he remembers that first day well. His injuries were severe, and he was a very sick little kid. With lots of antibiotics, dressing changes, skin grafting at MERLIN, and lots of TLC from his grandma (who rarely left his side for weeks) and hospital staff, he slowly improved. One of his injuries, however, didn't improve with time--it got worse.

We knew as early as February that Rosemond would need specialized surgery to correct his hand/wrist problems. These problems resulted from a crush injury to his forearm, which lead to severe nerve damage. As you can see in the picture below, his hand and wrist were very deformed. Any movement of his fingers, hand, or wrist was extremely painful. His fingers and hand were essentially "locked" in one position. You can read more of Rosemond's earthquake story here.


A plastic/hand surgeon from MERLIN assisted us with specialized splinting of Rosemond's hand. An organization in the U.S. generously offered to help us secure a medical visa, and an orthopedic surgeon offered to donate his services. For many (social and psychological--not medical) reasons, we didn't think that traveling to the U.S. for surgery was Rosemond's best option, but we continued to pursue it because we lacked any other options.

In April, we heard (last minute) about a visiting team of surgeons operating out of L'hopital de la Communite (in Port au Prince). We made some phone calls and got permission to bring Rosemond to see their hand surgeon, Dr. Mike, the next day. Dr. Mike and his team performed a tendon transfer surgery in late April. Rosemond's arm was in a specialized cast (applied and re-applied many times by surgeons at Medishare and other facilities, along with Dr. Cliff).

We all sort of held our breath when his last cast came off in early July. It took a week or two, but slowly, we could see that things were much better. Sendy (a young Haitian woman who's been working with us since March as a physical therapy assistant) worked with Rosemond day after day throughout July and August. When I left Haiti in mid-July, Rosemond was showing a lot of improvement, but he was still very hesitant to use his right hand. We had to remind him (and sometimes force him) to eat with his right hand. We were worried that he would continue to favor his left hand, and end up with a functional, but not very useful, right hand.


Thankfully, he proved us wrong. When I arrived in Haiti in late August, one of the first things I noticed was how naturally Rosemond was using both of his hands. And to my surprise, he was also writing perfectly with his right hand. He'd improved far faster than I expected, and it made all of us really happy.

Dr. Mike gave him a second chance at having as normal of a life as possible in Haiti. Rosemond will still face enormous challenges as he adjusts to his new life after suffering through incredible loss. He will now grow up in a Haiti forever changed by 45 seconds of the earth shaking. Nearly everything that he knew in his previous life is gone. But he will face all of these challenges with a healed, whole body, and an extended family who loves him.

We are so grateful for everyone who's taken care of Rosemond since January, and I hope you're encouraged by seeing the end result of all of your hard work.

(On a side note, Rosemond has gained about 25 pounds since January, and I'm guessing he's grown about 6 inches taller!)


~~~~~~~~~~~~~~~
Jen is back in Haiti for the next few weeks and is partnering with another ministry to help coordinate a bunch of surgeries.  Please be praying for her, the other docs and those patients as they come to mind.
We love you so much Jen!!!
t & t & tribe
at Saturday, September 18, 2010