Thursday night we went to the elementary school campus that Isaac, Hope, and Noah attend.  It was "meet the teacher" night.

I am positive there could not have been three more spazzed out children in all of Waco proper. There were zero children taking turns talking and zero children acting poised or well-mannered or even slightly aware of their surroundings.

It was eye-opening as parents to hear how our children act while under the direction of someone other than us.  (Eye opening is code for - annoying.)

Things that were said that do not match up at all with the little people we know and love:


Isaac is almost as tall as his teacher. Besides being short, she was also adorable and very sweet. We laughed when a tiny little classmate/girl named Faith came to give Isaac a little hug hello and goodbye. We tried to ask him about that, but then he played it off as if it was nothing and chicks hug him all the time.

Hope had been telling us that her teacher looks like Tess and that we HAD to see her.  She was both thin and lovely.  That is like Tess.  Other than that we couldn't find the resemblance. But we could tell Hope wanted agreement so we shook our heads, yes yes she definitely looks like Tess. 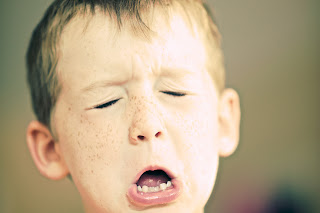 The Kindergarten teacher did say that Noah was acting (at meet the teacher night) like a child she had never met.  I told her that on Monday morning after numerous creative attempts to not go to school the very last trick he had in his pocket was to come into our room, throw himself on our bed, and proclaim "But my teacher is mean!"

Now that I have met her, I will laugh in his tiny crumpled-up and freckled face the next time he tries that one.

Isaac is struggling with knowing when it might be a good time to ask four billion questions and when it might not be.  Yesterday Troy was clearly on an important phone call.  If you watch reeeaaallly closely you can actually see Troy wave you off, stick his finger in his free ear, and leave the room you are in. Somehow Isaac missed all the signs.  He was interrupting as if to say the house was flooding. A flood would be a very important thing, but even more serious than that, Isaac needed to ask "Do Alligators have eye-lids Daddy? Do they do they!?!Huh, huh, huh???"

The child asks at least a dozen odd and random questions a day.  Several weeks ago I was washing dishes when he walked into the kitchen and said, "Mama, why are the tubes you have called Fallopian tubes?" directly followed up by, "Okay, Mama, if you could ride any type of shark which kind of shark would you want to ride?"

This week's most pressing question:  "Daddy/Mommy -What is your very favorite reptile?"  (and surely we all have one)

This only serves to fan the fires of our burning desire to know - What is your very favorite reptile? Huh? Huh?
at Saturday, September 04, 2010