It used to be that the bird noises came only from one side of our lot/house.

Now we are 'lucky enough' to have a much more balanced surround sound bird choir.

There are times in the day where you must raise your voice to talk over the sounds of the birds in order to hear one another.

If we want to fudge the truth and tell someone "I'm on my way - just left" as we are walking to your car ... they will instantly bust us for being home because they will hear the obnoxious background birds on the phone.

It's really sad we can't lie to our friends anymore.

Sometimes the ridiculous volume and quantity of birds is comical.

Other times nobody is laughing.

In the night we occasionally get to listen to the sounds of a rat and multiple birds in a literal "cage match".  The rat runs along the metal roof of the above photo but something goes terribly wrong and he loses his footing, then drops down on top of the birds. This is no silly WWF style fake staged fight. There is no show-business in a Port au Prince cage fight. They fight to the death.  Judging from the sound of it, the rat most often finds himself on the losing end.

Therein lies the only positive attribute I'll ever recognize about our feathered neighbors. They kill rats occasionally. Way to go! Good on you gaggle of hens.

The Pigeons are a newer post-earthquake addition. We never once had Pigeon poop on our hanging laundry prior to 2010. They belong to the neighbors on our left. They pass their time crapping in our yard and like to sit on the roof and stare into our window at us when we shower. It's quite creepy.  Make eye-contact with a Pigeon, you'll learn they don't even have the manners to look away.

These manner-less pigeons are also bound and determined to build nests and lay eggs in our windowsills.  Recently we gave up on ruining their nests and forcing them to go elsewhere.  We figured they've seen us naked, what dignity do we have left to preserve? We let them build.

One day an egg appeared.  The three musketeers (Isaac Hope and Noah) were all thrilled to see the egg.  They checked on it frequently.  Last week they came home to find the egg and nest missing from Hope's window.  They came running to me asking where it was.  I shrugged and said, "I don't know. Ask Geronne."   Geronne acted like it was a dumb question and in Kreyol said, "I smashed the egg."  I translated.  Isaac looked like he might cry.  "You what?!?!"  He said.  "Sorry Isaac". Geronne said in English.  He walked away slumped shoulders and said, "Mama, ask her where she smashed it, because I really don't want to see a dead egg."

Ironically I was making eggs at the stove during this conversation. 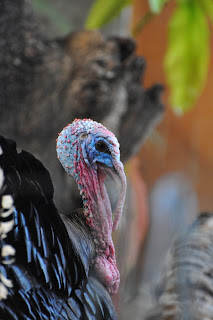 The Turkey is probably the most curious of all the fowl neighbors.  He makes the gobble gobble noise most mornings while we eat our toast. He sometimes gets caught in the "democracy wire" atop our property line. We keep waiting and watching for the day he is no longer standing on top of our generator house. We don't know a lot about birds.  We only know that of all the sick, scrawny, nasty foul around us the Turkey appears to be the only bird worth the time and effort.  He actually looks like he might feed some people.

The neighbors that own the Turkey invited us for lunch on Sunday afternoon in a couple of weeks.