Adrenaline is an awesome drug...except when you cannot sleep because you cannot get it to leave your veins.  What that rat took from us, we can never, never get back. (No, seriously, we will never get last night back.)

Saturday morning we went to a meeting. By the time the meeting was done Troy was not able to be upright anymore. He headed back to bed.

Mid-day Saturday Troy was in bed trying to deal with his Malaria when Buddy Evan came over to sweetly offer to get us some diesel for our generator and to swim with the kids.

The (EDH) power situation has been underwhelming for quite a few days.

Once I had him in my kitchen I asked, "Hey would you mind moving a stove?"  Not a problem for him. His arms are long enough to handle such a task as a single man show. Our boys already think he is a giant super hero, this stunt only solidified that belief. 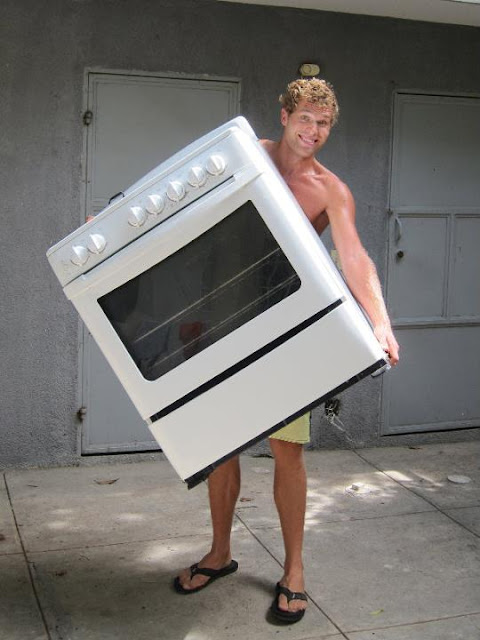 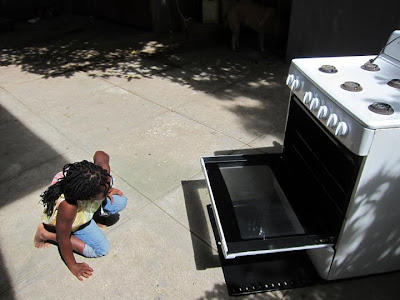 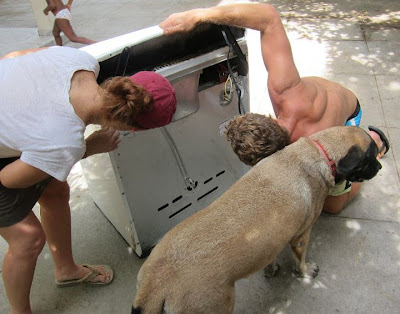 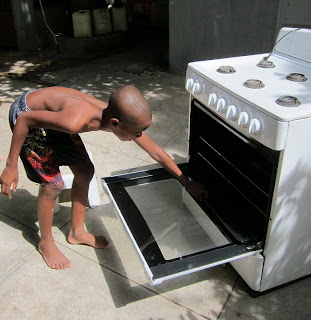 Of course removing the stove and finding the rat somewhere in it would have been way too easy. The evil varmint was nowhere to be found.  We went back to our busy day. At every turn things were breaking in our house and going wrong.  It was enough that it felt over the top - like watching some cheesy comedy wherein it seems totally impossible for so many things to be breaking, overflowing, shutting off, shorting out, and overflowing again. The marvelous thing was that I had cried so much on Friday (over the more serious unshared things) that on Saturday I laughed at everything. Like throw your head back crazy-person laughing.  I am telling you, it was ridiculous.

Late last night after a truly insane day and night we got home from visiting sick little baby Miles at about 11:45pm.  (No thanks to the bus we "bumped into" - the horrible road we attempted to travel - or the police stops every four blocks.)

I am nothing if not obsessive, so as we parked the car I thought, "I wonder what that stinkin rat is up to now?" We peeked into the windows of the house to see if we might see it in the kitchen before we entered.  The stove was still sitting in the back yard.  We entered the kitchen.  I told Paige to shake the fridge.  She did.  No movement.  We said goodnight to Geronne who had waited up to let us in so as not to wake up Malaria-boy.   Jen said something like, "Maybe we scared it away for good" at the exact moment those words were leaving her mouth the rat ran past me and onto her foot.  It did not matter how filled with parasitic blood Troy's veins were at that point, or how much he needed sleep. I screamed my ever-livin head off.  I am sure Jen wished for a hazmat-style washdown of her foot and all body parts attached to her foot.

Troy came to the top of the steps. We told him that we planned to end the rat once and for all.  He got dressed and came down. 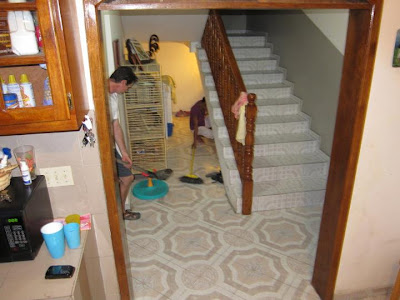 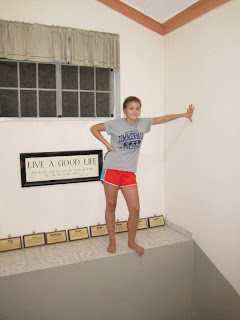 Geronne began trying to scare it from under the steps. Troy stood ready.  The shovel he grabbed is used to clean up dog poop.  Troy said, "What if it goes upstairs?"  We all told him that was ridiculous. Twelve seconds after this photo the rat jumped to the fourth step in one single bound and Troy ran up the stairs slapping the shovel and falling down as he went. The dried poop on the shovel left evidence of every strike Troy attempted.  At the top of the stairs it was dark.  All the lights were out because five kids were asleep in their rooms.  Troy saw that the rat seemed to go to the right and straight.  We all came upstairs and began tearing the place apart.  We determined that it did not seem to be in the office area or the boys' room.

We searched hard in Lydia, Phoebe, Hope and Geronne's shared room.  I went to put on big shoes in case that rat tried to defile me the way it had Jen.  Finally I said, "I think that dresser would be really easy for it to hide in."  I pulled open the bottom drawer.  We all saw rat poop.  We decided to move the girls out of their beds.  Paige carried Phoebe down to her room to sleep with Moses.  I carried Lydia to our room and Hope woke up enough to move to our room herself.

If you love rats or are a member of PETA -  Stop here.  No, seriously - Stop here.

Troy and Jen and Geronne pulled out the second middle drawer. Jen took many tries at hitting it while it ran all over the room. She missed a bunch of times and then gave Troy the shovel and captured the rest on video for posterity's sake - this shall be accurately recorded in the annals of rat history ...

The best part of this video is that after all that noise, at the end Geronne whispers "M'panse li mouri" or "I think it's dead."  Why the whisper?  Respect for the dead I suppose.

This morning I apologized to Isaac for all the noise we made trying to get rid of the rat.  He said,
"Yeah. The way you guys killed it seemed pretty violent."

Phoebe saw the photo of the dead rat and said, "Is that a dog?"

Truthfully, we are not willing to entertain the idea that there are two rats.  This is a tiny rat in terms of Haiti rats.  It seems this rat was upper class and had two homes.  He certainly knew his way between his two houses.  Today he will be laid to rest by family and friends.  Memorials preferred. 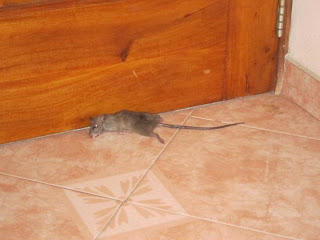 One week after the epic rat vs. human battle began, it is finished.
at Sunday, August 28, 2011