three days that were and are no more

There is definitely some freakish phenomenon going on lately wherein you blink your eyes and two weeks have passed you by and you're fairly uncertain about how you landed in the stinkin' double digits of a new flippin' month.

Friday the team pictured above headed back to Tejas. They were team number four from The Austin Stone church this year.

Mid-day Friday Troy helped me pick up Olina.  It went poorly. Troy admitted later that he hadn't prayed yet that day and that he was agitated. The security guard and Troy exchanged insults over his refusal to let me enter because my shoulders were showing (even though I could see a woman in a strapless dress sitting right in the lobby) and while Troy argued with the power-hungry security guard he needed me to say, "Let's not make enemies here since we need this place. I'll wait outside." Troy eventually paid and got Olina and baby Elizabeth out of the building.  Troy said that the lecture and instructions they barked at Olina were rude and condescending and he found it hard to watch Olina and her husband Simon being treated so inhumanely.  It is often true here in this system that the educated treat others (whom they seem to perceive are all total idiots) like scum.  If you want to get really riled up and read about finding health-care for a disabled person in Port au Prince, read this.  If you don't want to get riled up, read this instead.

While Troy was there he tried to get info about a sweet woman named Jacqueline that Beth transported on Thursday.  They told him in the 'you stupid bothersome fool' voice:  "We don't know our patients by name."

Even though we saw Olina Friday and Saturday, I forgot to get photos.  Elizabeth looks like Olina.  Simon and Olina are giggly and happy about their first (and likely last) child. Keep praying for her as she heals from major surgery and is suffering from headaches too. 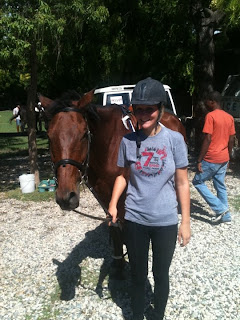 Saturday at the crack of dawn I went for the longest run of 2011 and found out my foot still isn't right from turning it over last week.  Later, at a more acceptable hour, Troy took Paige to a new Equestrian place.  To say that she was thrilled with her time there is an understatement.  Troy called to tell me that the beauty, combined with the opera music, combined with how nice the man was that runs the place, combined with Paige's happiness were enough to make him feel like he might weep.  He then told me that he volunteered to take Paige to every riding lesson.  SUCH a giver that one.

(The riding lessons she took pre-earthquake were not nearly such a lovely experience because the Frenchman that taught her was verbally abusive and he ruined many of our days. It got to the point where we fought over him and how to deal with his horrible mean streak.  Meanwhile, we paid the place. There is clearly something wrong with us.)

All that to say, we are very pumped about this new place.  We will now commence fighting over who gets to take her next time.  (me) 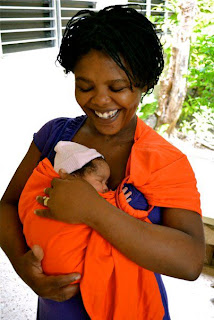 Saturday afternoon we went to get the person they didn't know by name from the hospital.  Thankfully we could now call her and ask her where she was and she could tell us.  Silly us - expecting the hospital to care to know her name or what room she's in, etc.  Jacqueline needed a c-section Thursday night. She came to program last Thursday at about 36+ weeks gestation with her water broken and it had already been 14 hours, yet there were zero signs of labor.  Due to the intimidating germs in Haiti and the uncertainty we typically have surrounding due dates it was decided that she needed to be induced in a hospital.  She had to have a c-section instead.  We're not sure why the c-section, as it is also the norm in Haiti for patients to not really be given much information about their own health.  When we picked her up, she was amazing...she didn't act like she had just been discharged 40 hours after a C-section.

The rest of the day we halfheartedly attempted to do work while we sent younger kids to spy on Paige and her friend Kevin in the family room.  Noah was more than happy to go tell Paige he needed a hug.  Paige was more than onto the fact that we were trying to be sure that nobody (named Kevin or Paige) got too cozy.  It turns out that the security camera that Harold (Tex) installed when he was here will actually turn 360 degrees and will look INSIDE the house instead of at the yard. Paige was not nearly as amused as we were.


Today was a cloudy Sunday in PAP wherein two "adults" scrambled to find proof that they completed the adoption of a kid in 2010, dug around in a non-existent system of boxes and folders and drawers and Rubbermaid bins to find tax info and receipts, contacted Texan children to see if they have said receipts, realized they spent too much in the last 30 days, figured out that they missed paying two bills in late September and now have late fees, and eventually sat blankly staring at each other and wondered what it is like to be responsible?

A proclamation went forth throughout the house- "Kids, being a grown up isn't all it is cracked up to be ...

Late September and that perfect storm of chaos took every last brain cell.  When I call the people at Citibank I am sure they'll understand.

Because so much searching needed to happen and we were skipping church to do it, all of a sudden it made perfect sense that it be declared an all-family deep cleaning day.  Let me just say, the place looks amazing.  The game pieces no longer live in four or five different places. Should you wish to come play Connect Four, now you easily can.  I felt quite satisfied with our results. Sadly, a lot of small people went to bed resentful tonight.  Apparently they don't know what a gift it is to have all the Jenga pieces in their proper place.

I'd say more but we still need to finish finding information for our taxes ... Yes, Yes, the ones you filed back in April. - those taxes. We're gearing up to really impress the fabulous guy that helps us with this.

October 15th - pshaw!
The way it's looking, we will have that beat by hours.