get to work kids 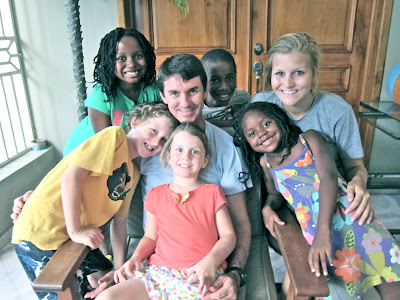 "Mom, dad totally did NOT like you the first time he met you.  Do you remember that he hated your big hair and thought you were rude?"

Yes. Yes. Of course I remember because I told you that story in the first place, little fools.

A few days ago we spend a considerable amount of our chit chat time discussing jobs.  It seems that we live in a country where teenagers don't get jobs like we did growing up back in the "olden days".  They honestly live in such an alternate reality that when I told them I started my first paying job at fourteen and that Troy was fifteen, they looked at me with the "you're such a liar" face.

I asked Isaac, "Well, what will your first job be?!?"
He said, "Hmm, I am going to be a vet. So something in a lower level vet office."
I had no idea what that meant.
Lower level as in downstairs office or lower level as in they don't yet care for real live animals.

Upon clarification Isaac said it means he is low-level and maybe just "holds the Guinea pig on the table for the first year".  He said "no dogs, cats, or turtles in the first year". (Turtles are high level??)

My first job: Waitress at a private retirement community in a restaurant that was open just a couple hours each evening. It was there that I delivered dinner to elderly people a few nights a week.  It was a very fun and easy job as long as you didn't get one particular blind man in your section. His name was Stanley, he so disliked me. When it came time to tell him where his food was on his plate (beans at 9 o'clock) he always got impatient and angrily snapped at me before the words were all out and the explanation was finished, I was always nervous when it came time to put the food down in front of Stanley. I fantasized about spinning his plate and putting his beans in a place he'd never find them. I had that job for a couple of years before I moved "up" to a different restaurant job that required wearing a full Dutch costume. :-( Yeah, hat and everything.  Suffice it to say, I missed crabby Stanley pretty quickly.

Isaac would like to pose a question to all readers willing to comment.  He'd like to know how old you were when you got your first job and what job it was?