of turtles and boys

Every morning at some point before 10am you will find this scene: 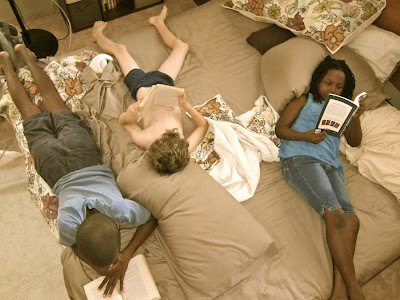 They typically start around 9am. Today they started reading much sooner. They want to be done early in the day because big things are happening late morning. A pet that has already been named "Crush" is making its way through intense Port au Prince traffic and down the treacherous hills of Delmas 33 to its new home in Tabarre.

Another expat offered up a three year old turtle a week or two back. I indicated that we were interested.  The mistake was made when we allowed that information to leak to the two boys too soon.  In the days since the boys learned of this possibility I have actually said things like "Please.  PLEASE.  Stop talking about the turtle."  "We can talk about it once it is here." "Can we take a break from this?"  You'd be amazed at the volume and length of conversations and speculation that can come from thinking about one measly 8" Haitian turtle.

Noah obsessed about the countdown.  When Troy changed his plans for today and was no longer going to be up near where the turtle needed to be picked up I put on my advocate hat to beat the drum for the cause of the turtle and the cause of the obsessed boy. I knew Noah would not accept waiting longer, today was the day he was promised. The four thousand friendly reminders did not go unnoticed.

Troy was tired and possibly a little grouchy when I presented him with the facts. I could tell he was considering changing the great turtle exchange to another day.  I silently prayed against such folly.

The air is thick with anticipation. The excitement is palpable. Noah is certain his summer is about to get so.awesome.

Our last small pet, "Hermie" the Hermit Crab traveled to America with us post earthquake and met an untimely death in Waco, TX.

The beloved Livesay children's pet- a Haitian Hermit Crab found on Wahoo Beach in November of 2009 and smuggled out of Haiti post earthquake by Paige - died in Waco, TX of not-so-natural-causes. It turns out that if your hermit crab is left in the bottom of your toy box without water it will eventually fall out of its shell and perish.

Let that be a lesson unto you.

I tried to convince Isaac Hermie had a good run. What other hermit crab crosses the Caribbean by air and eventually becomes a Texan? Isaac was too sad to enjoy any of my dumb jokes. Troy organized a burial service and Hermie was laid to rest. It was all very lovely and crab-honoring ... until later that day when Lydia was bored and decided to try to unearth Hermie.