There are so many things to write about but not enough time to write. I am attempting to keep notes so that once we have internet at our house I will have months of material stored up. :) I also have many photos and videos ... it will come eventually. TIH - and when the guy says "sure, no problem" he really means - you won't have internet until year's end or so.

I warn you that this post will be scattered all over the place. I am tired and need to just go ahead and have a melt down ... so forgive me if this is raw.

We pulled out of LaDigue last Sunday late afternoon, many tears were shed. Paige, Jeronne and I cried the entire way down the dirt road out to Route Nat'l One. Dad wished he had chosen another vehicle to ride in. I still feel on the edge of tears as I write this. I miss what had become our "normal" and finding the new normal is going to take some time - I have never been a patient person, although Haiti has managed to make break much (some??) of my impatience. I just want to find our groove, feel at "home" and have it all figured out ... but wanting it does not make it so. :(

Tipap and Jeronne both seem very happy to have moved into town with us. They are helping with so much and have been a godsend to us during an insane time. We've taken time to discuss the future with them and they're both excited about the opportunities that lie ahead.

Tipap is so good with babies that he doubles as the back-up nanny when Jeronne and I each have a baby and there is a third demanding something. For whatever reason the kids seem more overwhelming to Troy and I right now ... a product of exhaustion and emotional upheaval I'm sure. Sometimes I just wonder why God ever thought we could handle so many kids. I don't feel very capable right now. Sigh. 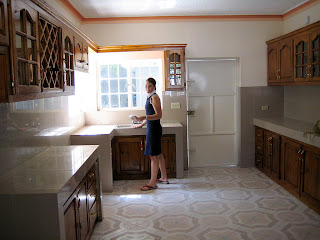 Jeronne is so impressed with the house. She made me laugh when she said she needs to take photos to show the people in LaDigue because they will certainly think this house sits somewhere in New York. :) (New York is second only to Heaven in the mind of most Haitians.) Meanwhile I am bummed that the plumbing and electricity are spotty and the bugs and heat are nothing short of horrific! It is all about perspective I suppose. I need some of Jeronne's perspective right about now.

Troy and I and the kids are so thankful that Dad came down to help with the move. He built shelves for Troy in the "depot" and as it turns out kitchen cabinets here do not come with shelves, so he took care of that for me. He helped with a ton of things and we really needed him.

We put in some really long days, the poor man was forced into our goofy non-eating schedule and probably felt hungry half the time. One night he was walking into his room to sleep when Troy announced he wanted to take the ginormous green table apart and move it. Poor Dad ... Troy needs five hours of sleep, and is a slave driver - and I forget that most people like to eat meals. ;)

Dad finally got out on Thursday, but not without a crazy experience that left him both overwhelmed and disturbed. He had a new ticket reserved - and my friend Beth was also trying to get out on standby because her seat had been cancelled due to Gustav. They both reported never having been in such a scene before in their lives. Dad said for once he was glad to be a great big guy (not necessarily all height) and that he worried that people could get trampled.

Beth called and said that there were 2,000+ people and no one could move. No one would get in line, there was no order and everyone wanted on a plane. There were women crying and pushing and people yelling and upset ... mass chaos best describes the scene at the PAP airport on both Thursday and Friday. Beth finally got out on Friday late afternoon. After hearing the stories I've determined never to enter the airport the day after major cancellations, it sounded pretty awful.

We received a telephone call from our Pastor in MN with more news about Steve K. (from our home church- we had asked you to pray as Linda tried to get out of Haiti and home to MN to be at his side) He passed away Thursday. We know many of you prayed for Linda and Steve and their kids and we ask you to continue to do so. We're sad for the loss of a Dad, a husband, and a friend. . Steve never regained consciousness after his heart attack. Please pray for them in the coming days and weeks.

We paid a year of rent and met with the owner of our house on Friday. It all went well and he is letting us use his really nice bedroom furniture. At one point he said he wanted $1,700 U.S. for it - hahahhahaaaa. Then it was free.

Troy got a kick out of the discussion over our address. On the contract they needed to fill in an address (if you have been here - you know that it is all pretty arbitrary and pointless). The attorney present for the meeting said, "Well this is the first road into this neighborhood - so it is Road number one." Then he said, "Usually you just see what the numbers are on the houses around you and pick one different for your house." He left and went outside for a few minutes, came back and said, "it's vague." Then, after much discussion, it was decided. "Eleven". So -- if you're visiting Haiti just head to Road One house Eleven in the vicinity of Tabarre. We're waiting for you.

School is going well for the kids. We're trying to figure out a way for Hope to stay there, the noon end time is making things tricky for us. Isaac and Paige are both making friends and feeling a part of the community already. Noah does not seem too sad without Hope and Ike, he is suprisingly okay with being the oldest for a few hours a day. Phoebe, Lydie and Annie are all doing pretty well. As I said earlier, everyone seems needier and we feel less able to meet all needs right now -- but we're trying to take it five minutes at a time. Lydie is the target for all mosquitoes and looks like some sort of dot to dot game was placed on her chunky thighs. The poor little smooshy baby.

Before I head home where we hope to have Internet in the next decade, a few random bullet-points:
As John Ackerman told us recently:
'Hangeth In There'
He's so spiritual. ;)
at Sunday, August 31, 2008