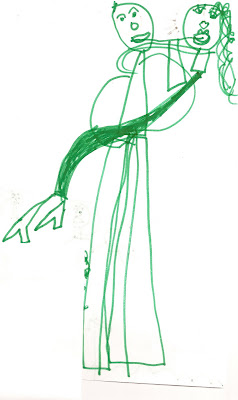 There is NOTHING more exciting to a six year old girl than having a big sister getting married. Hope is the flower girl and she is spending all of her creative energy on drawings like these right now. :)

"How We Met" (by Britt)
With Hope's sweet drawings as of late, I have finally decided to tell you the story of how I met my man.

Please, if you will, rewind back two plus years and to a well-known American "holiday" in May. If you're a smart child (or husband), you might do something special for a certain woman in your life. But that was not the case for me, Isaac, or my dad on that given day. No. We went to the beach. Without my mom.... and several small children , especially one who will remain unnamed that to this day is still a lot of work.

We (my dad and I) like to blame it on the fact that we were hosting a mission team and were actually taking *them* to the beach. Regardless, we didn't realize the fact that we forgot Mother's Day until we had been at the beach for most of the day. Oops. Here's where I tried to make amends that year.

At the beach, Isaac and I were playing near the shore. Later on, he asked me to take him out to a floating raft. I really didn't want to go out there because I had noticed that the raft was already occupied by some guy. We had been living in Haiti for five months. That was long enough to know that the only guys at the beach on weekends are usually UN soldiers. Besides, the guy was wearing black trunks and was tan - which was sure enough sign to me that he was UN. I had learned the hard way that many beaching soldiers were Brazilian. And Brazilians tended to be how do you say, forward?

Isaac continued to insist that we *had* to swim out there. Hoping that the unknown guy would leave as he saw us swimming up, I agreed. But he didn't. And as we approached the dock, I realized he wasn't UN at all, but an all-American boy. 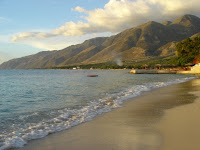 He introduced himself and made small talk, mainly with Isaac, and shared that he was a student at UF here on a mission trip with his dad's church.

He said that he had been to Haiti before when he was younger, but this trip would be spent working at his godfather's clinic, which coincidentally is the closest ministry to Lifeline (about 3 miles.) And that was about the end of our short conversation, because he had to go join his group for dinner. I remember that he dove off of the dock. (Show-off) ;) 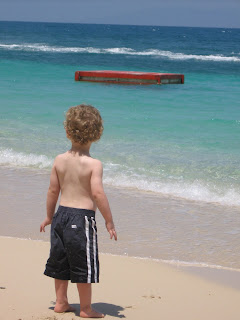 So that was that. No email addresses exchanged. I don't even think I told him my full name. It was a beautiful moment and then ... it was gone. I begged my dad to go visit that clinic during the week that I knew Chris would be there, but he didn't have time (or so he said!) I soon put that guy from Wahoo Bay out of my mind, knowing I would never see him again.

We met on May 14. On July 27, Mark and Kathy Fulton visited our house. They just so happen to be the founders of the ministry Chris was working with that week in May. They are ALSO his godparents - having been best friends with Chris' parents for all of his life. Somehow my mom and Kathy got to talking about Chris. My mom recalled him as the guy that I rushed home on Mother's Day to tell her all about (after extensive apologies first of course). Kathy took my email to give to Chris and I got his mom's email because she didn't have his memorized.

I wasn't about to email his mom (sorry Jill:), figuring he had long forgotten about me. After the two week "cool" period came and passed, my presumptions seemed to be true. He was clearly too busy or just plain not interested. So again, I put him out of my mind.

Then a few months later, I received an email from him. He said that he remembered me and had just gotten back from a medical missions trip to Honduras and wondered if I wanted him to tell me more about that. Also if I could help him practice Creole - he had enrolled in an intro to Creole class at UF. I think I waited a couple days to reply, you know the "cool" factor still being important that early on in the game.

And pretty much the rest is history. We first got to know each other through email and instant message. We talked for the first time on the phone on Christmas. And then again on New Years - I was the only one in the whole house who stayed up to ring in 2007 - with Chris on the other end of the line. Soon after, Chris visited me in Haiti. And that was the end of the beginning.

Christopher proposed to me in Central Park on a Bernard family vacation to NYC this May. 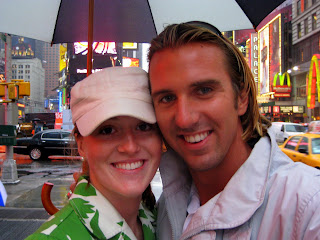 Chris just moved to Waco to attend Baylor, I return to school later this week too. Please pray for us as we start this new chapter of our lives, preparing for marriage, searching for a home church, and both of us continuing our education.
at Monday, August 18, 2008