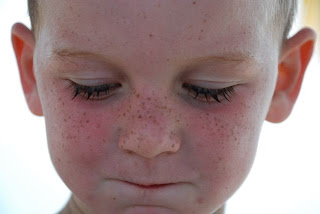 Our kids have all been acting out a bit. We know why... they are feeling the stress and doing the normal kid thing. When things feel tense, heck ... why not create MORE tension??? Because that makes so much sense.

We are feeling the stress and operating on shorter fuses. It stinks, we're trying hard - but failing often.

Last night Noah decided he did not want his rice. He pushed his bowl off the counter and let it fall to the ground, then claimed it was an accident. I grabbed him by the arm and escorted him to the shower to get ready for bed. He was mad about that. I gave him the short tempered, "yeah, well too bad!" response.

I added Lydia to the shower and turned away for a second. The next thing I heard was Lydia screaming. I turned to come back into the bathroom to see Noah had dumped a bottle of shampoo on her head and she was kind of choking because so much had gone in her mouth and nose.

Mad does not begin to describe how I felt in that moment.

I got Lyd settled down and handed her to Britt. Then Noah got in trouble. After I had calmed down and he had calmed down we talked it out and discussed the fact that being mad at your Mom does not mean doing something mean to your baby sister. (Lord help us!) We prayed about it together and moved on with the evening. He seemed very remorseful.

About an hour later I was putting Lydie to bed and Noah asked to come with me. I laid her down and prayed quickly for her. I looked to see Noah had his hand through the rails and was rubbing her leg. I said, "Do you want to pray for Lyd?" He said "sure" or actually "sho" - because he does not pronounce the letter "r" well - then he said this:

"Deaw Wydia-
I am very sowwy that I pouwed shampoo in your head and eyes. I don't know if you know this but Mom put a vewy big beat down on me after that - so we don't want that to happen evew again. Amen"